A Safe System for Heavy Lifting After a Disc Bulge

I’ve had a mountain of enquiries from people all over the world asking the same question:

“What is ‘the best exercise’ for my low back problem?”

This question shows a lack of insight from injured athletes and their practitioners. There is no universal “best back exercise.” There is, however, a best system of assessment and method of choosing the best exercise for the right time.

I’ve had a mountain of enquiries from people all over the world asking the same question:

“What is ‘the best exercise’ for my low back problem?”

This question shows a lack of insight from injured athletes and their practitioners. There is no universal “best back exercise.” There is, however, a best system of assessment and method of choosing the best exercise for the right time.

Every case is different and needs to be evaluated on an individual basis. In fact, as you will see in the following case study, the exercises I recommend for back pain change every two weeks. The best exercise at one point is replaced by a better exercise when the factors are re-evaluated. To give you an idea of what goes into the planning and execution of a successful low back rehab program, I’ll present a case where successful return to maximal lifting has been achieved without any significant change in the MRI-demonstrated disc injury.

In April 2015, this person had experienced severe low back pain after squatting, and was subsequently stuck in bed for the following week with low back and right leg pain. The MRI on the left was taken at the two-week mark post injury. The report described a 9mm retrolisthesis (posterior displacement of one vertebral body with respect to the adjacent vertebrae) and associated disc extrusion fragment 10x12x18mm. This was compressing the right S1 nerve root and, to a lesser extent, the right exiting L5 nerve root.

Compare the MRI on the left to the MRI on the right, taken six months afterwards. You will see there is little change in the bulging disc from the first image to the second one. What does this tell you? Not a lot, until you understand the rest of the patient’s story. Read on, and you will understand why you treat the person, not the MRI.

The patient came to me for evaluation six weeks after the initial incident. He had just returned to training and was lifting 110kg in both the deadlift and squat with some resultant aggravation. His hope was to achieve a 220kg deadlift and squat by the year’s end.

“There is no universal ‘best back exercise.’ There is, however, a best system of assessment and method of choosing the best exercise for the right time.”

To look at the MRI, it might have appeared that extension would have produced exacerbation, due to the size of the fragment and the retrolisthesis. Yet it did not. Further physical examination showed weak gluteal extension activation, but excellent hip socket range. So he was prescribed home exercise with an extension focus and told to cease squatting and deadlifting until his technique was refined. He was also prescribed glute activation in hip extension and, as he progressed, single leg bridges focusing on pelvic control.

After a week of approximately daily 100 extension exercises (both standing and lying) and 100 daily glute activations, I reviewed him and evaluated his squat and deadlift techniques. Here I was mindful of the flexion aggravators and set out to maximise his neutral spine control. If you have read my previous article on rehabilitation for the lumbar spine, you will know how it will focus on the pars thoracis components of the erector spinae as the most effective controllers of this posture.

There was a “butt wink” at above 90 degrees in the squat evaluation. Structurally I had tested his hips and found them to be able to get him much lower without that lumbar flexion. To work on this, I utilised a two-pronged approach:

An instant pattern changer. He was compression tolerant but shear provocative to manual testing. So this also encouraged our pursuit of neutral spine control. He was to perform the face-the-wall squats frequently each day and the counterbalance squat every training session.

Two weeks later, his flexion tolerances improved in time, range, and frequency. He was still advised to minimize these and we began his deadlift and squat technique alteration. He had been lifting conventional style at the time of injury, but my examination showed a clear biomechanical advantage to sumo stance in both deadlift and squat for his anthropometrics. Read my article on sumo prescription to understand more about this concept. We began with a sumo kettlebell deadlift and a sumo box squat using a high bar position. The sumo kettlebell deadlift brings the bell’s mass closer to your own centre of gravity and minimises anterior shear forces. These were done daily.

Another two weeks on, all the improvement had continued. He was now pain free and unrestricted in any movement direction. Changes to his training were still focused upon creating neutral spine control, but in more fundamental movements. I prescribed him front squats with heels chocked to maintain the neutral spine, and overhead bar box squats to continue to strengthen his erector spinae and abdominal control. He began regular bar sumo deadlifts in place of the kettlebell. All exercises previously prescribed were now decreased in frequency to accommodate the increasing variety of movements and loading.

At the next two-week review we worked on a variety of core work. I added exercises done in kneeling with his eyes shut to enhance proprioception. These included kettlebell halo movements and some kettlebell core exercises that I have created but not named yet – hard core control work with loaded changing masses. We used a double kettlebell seated suitcase lift for glute strength progression. He continued his previous technique work. 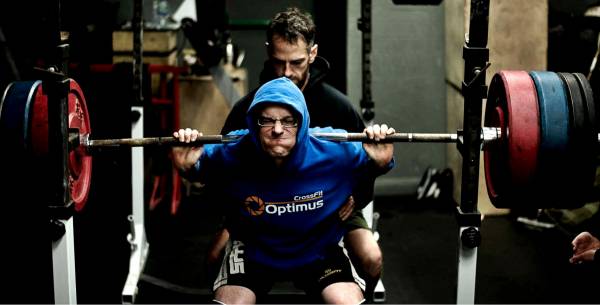 Exercise prescription depends on an evaluation of many factors.

At two weeks again, he was no longer provocative to shear testing manually, and we instigated kettlebell swings with 16-20kg for sets of five reps. The low numbers were prescribed to keep his technique perfect. I use a swing that is more glute- and hamstring-driven than the regular swing technique. My swing approach for rehab is all about rehab, not just getting numbers done. We also planned for him to perform squat variations every day during training, and he could now integrate low bar positioning.

His loads were increasing throughout the entire process. I continued to review him monthly, making technique modifications where necessary. At the six-month post-injury mark, he achieved both a 200kg squat and a 200kg deadlift.

So let’s look at the list of “best exercises” for his back:

The point of note here is that exercise prescription depends upon specific evaluation of many factors, and these change through time as the patient’s condition changes.

A Safe System for Unrestricted Training

This case study is an example of my unique strength training system. It is based on creating a hypothesis from the subjective patient examination and then testing it repeatedly with objective markers during the resolution process. It is important to understand spinal anatomy and human biomechanics in detail in order to be able to safely work with these disc injuries.

Look again at those MRI scans. You can see that the disc injury exists unchanged (that is another article I’ll write), yet the patient is totally asymptomatic and capable of unrestricted training. This is possible through knowing how to apply the correct hurdle requirements. The science behind this approach is in depth and spans many experts’ work, including Maitland, McKenzie, Janda, and McGill, to name just four. This does not even include the strength and neurological science works.

It has taken me more than twenty years of unrelenting work and research to produce a system that does this safely. But lucky for you, I’ll be running two-day courses on my methods during 2016. The first one being a 2-day event in March that I’ll co-present in Melbourne with Andrew Read and Greg Dea. Click here to book your tickets.