Last week an article about the kettlebell swing created a lot of buzz. It got me thinking about how CrossFit and other sports have evolved through the years and how discussion fuels those changes.

It occurred to me that this journal has morphed away from a weekly athlete’s journal and into a CrossFit observational blog of sorts. My approach has been to touch on issues that have stood out as noteworthy each week – and most of these things impact my training in some way, shape, or form, so I think it’s legit to discuss them. I think it’s more interesting than “well, my hammies were really tight this week so I did a lot of extra mobility.”

I draw a lot of inspiration and source material from the CrossFit Masters Facebook page. One recent discussion began around the issue of kettlebell swings – Russian versus American. A long thread over the pros and cons of the American swing ensued and, whether one agreed or disagreed with the points being made, there were links posted, video links, articles, RKC instructors, etc. It was a valuable discussion.

Then someone posted this (paraphrased):

“Wow – this is the longest thread I have ever seen on this board. Just swing the kettlebell. Less talk, more working out.”

What a shame that someone sees an exchange of communication and ideas in our sport regarding the safety, effectiveness, and efficiency of a particular movement as a waste of time.

I would hope that CrossFit as a fitness program is a dynamic, living didactic organism. A “Borg Collective,” if you will, where when one learns, we all learn. Like a huge school of fish, we are all individuals but we still tend to move with the entire school, either towards something beneficial or away from something potentially harmful.

Take the infamous bounding box jump, for example. Time was, we all bounded on and off that box. No one thought anything of it. The faster the pop off your toes at the bottom, the better.

Then the Open workout 11.2 arrived – deadlifts followed immediately by box jumps – and with it came a slew of stories about how folks had ruptured their Achilles during that workout. Within the community a murmur began – a murmur that said perhaps bounding box jumps were potentially unsafe.

Next, Kate Rawlings, 2010 CrossFit Games competitor and owner of Coca CrossFit, ruptured her Achilles roughly 27 box jumps in to a running of the Filthy Fifty. The publicity that ensued following that incident was rather massive.

What happened over the course of the next year is that the original murmur grew into a rather public discussion of the safety of rebounding, high-volume box jumps. CrossFit boxes all over the country began implementing policies of stepping down off the box for high volume box jump workouts. “Mandatory step down” became the buzzword. People were talking about it. 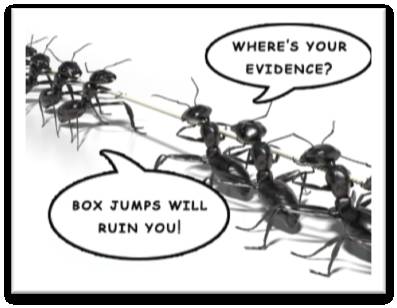 That’s not to say there wasn’t a tug-of-war between the steppers and the jumpers. CFHQ steadfastly refuses, via their social media writers, to acknowledge the correlation between box jumps and Achilles ruptures. Despite that, you will notice that in the 2013 Open, for the first time they not only allowed step-downs for workout 13.2 but allowed stepping up as well, and will also permit stepping down at the Regionals events. So even if the official company position is that box jumps are safe, HQ is responding to the collective with positive changes to allow options for more safe execution of box jumps in competition.

Every sport has morphed over time in response to safety concerns, discussion, criticism, review, and injury. Joseph M. Reeves had a protective device for his head made out of mole skin to allow him to play in the 1893 Army-Navy game because he had been advised by a Navy doctor that another kick to his head would result in “instant insanity” or even death. Enter the football helmet. Facemasks were not introduced for decades, because it took some time and probably a lot of discussion before folks were willing to admit that indeed, there is a direct correlation between lack of proper protective gear and broken noses and teeth.

And someone probably said, “Stop your whining! Just get out there and hit each other!”

My point is that we as a CrossFit collective are an ever-shifting, ever-learning, ever-growing hive. CFHQ doesn’t get to make the rules when it comes to safety. The ‘rules’ are borne out of a collective accumulation of information, evidence (empirical and anecdotal), incidents, discussion, and more. I can teach you. You can teach me. We can teach them.

And at some point, the community at large may decide that the American kettlebell swing provides a risk of shoulder and back injury disproportionate to its reward as a conditioning tool and move to the Russian swing, like we’ve done with box jumps.

Then again, maybe not. But the change for the better will never come if we just “shut up and swing the bell.”

Discuss. Then discuss some more.