Behind the BJJ Scenes: What It Takes to Run a Tournament

Organizing a BJJ tournament is so much work, so why do people do it? I spoke with Dan of Marmac Athletics to find out what he does and why he keeps doing it. 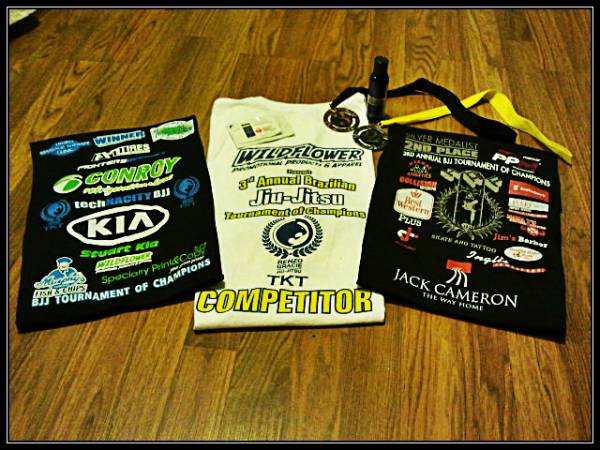 Before November 2012 I had never competed in a Brazilian jiu jitsu tournament, but I knew that when I finally decided to compete, it would be at Marmac Athletics’ Tournament of Champions. There’s always a lot of buzz surrounding this tournament, mostly due to the hard work of Marmac’s Associate BJJ Instructor, Dan Vanderlans. Planning a tournament is a huge undertaking. Organizers have to secure a venue, solicit sponsors, promote the event, recruit volunteers, order custom items, and ensure that everything runs smoothly throughout the day.

It’s so much work, I asked Dan why he bothered to do it. Was it a profit generator for the club? Dan snickered when I mentioned profits. For smaller clubs like Marmac, proceeds from the tournament go right back into the business. Money goes towards buying gear and equipment – mats for grappling are very expensive, there has to be gear available for new students to use before they can buy their own, and there are always overhead costs.

Dan told me he is fortunate that the goal of the Marmac Athletics owner, Micky Marshall, is to grow the sport and ensure that everyone has a positive experience. For the $35 registration fee at the 2012 tournament, every registrant received a free t-shirt and Defense products. Winners of each division won a medal and a rash guard for first, second, and third place. I competed in both gi and no gi, so at the end of the day I went home with a competitor t-shirt, two rash guards, two medals, a small bottle of Defense body wash, and a Defense wipe. In comparison, when I competed at the Abu Dhabi Pro Trials – which cost $105, plus an additional $20 at the door, as well as travel and accommodations – I went home with a t-shirt that was too big and a medal.

The Tournament of Champions is always held right at the Marmac Athletics facilities, but for other clubs it’s more complicated. They have to rent space at alternate venues due to limited capacity. The local Abhaya Open Grappling Championships 2013 attracted 175 competitors. Because they always hold their tournaments off site, I asked Abhaya MMA instructor Jon Foster if it is difficult to find a venue. He said “I’ve used King’s-Edgehill for… I think it’s been seven years, so it wasn’t difficult. If I had to find another place it would be.”

BJJ clubs often approach judo or wrestling clubs, schools, colleges, or local gyms to rent space for the day. Some venues will only host non-profit events while others charge an hourly or flat rate for the day. Organizers who rent also have to follow the rules of the venue including capacity, cleaning, and maintenance guidelines, as well as meeting medical and insurance requirements.

In order to pay some of the initial costs and to acquire products to give away as prizes, some BJJ clubs solicit sponsors. For the 2012 Tournament of Champions, Dan composed a sponsorship form letter that he delivered by hand to local businesses and emailed to companies who are a part of the Brazilian jiu jitsu community. To pay for the giveaway rash guards and t-shirts, Dan sold advertising space on the front and back of them, ranging in price from $50 to $200. Because rash guards are a difficult fabric to print properly, Dan chose Fundy Textiles because they guaranteed their work. Wildflower Promotional Products stepped into sponsor the “Competitor” t-shirts. It’s important for an event organizer to think creatively and not be afraid to approach companies and create relationships. 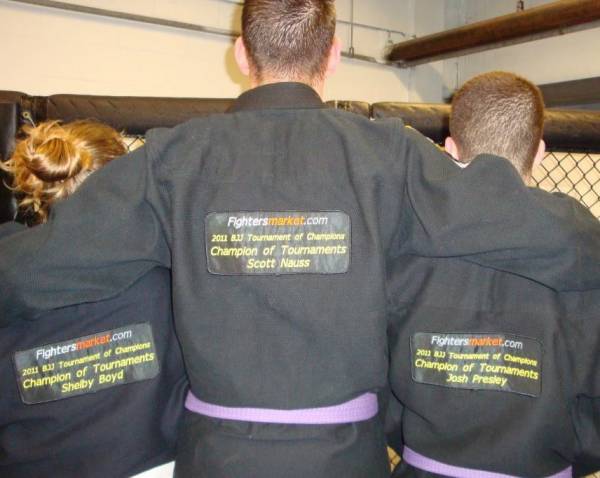 Because Marmac has an ongoing relationship with Fightersmarket.com for their wholesale Kingz gi purchases, Dan was fortunate to receive a donation of three gis to give away as prizes for the winners of the female, male, and superfight divisions. The winner of each gi also received custom embroidery to mark the achievement. Defense Soap was very generous and donated samples of wipes and body wash for all competitors. Other companies donated odds and ends such as shirts, shorts, DVDs, and various other items for prizes. Every competitor went home with something. Dan also worked with local business to get discounts on meals and services for competitors and attendants.

But Dan’s greatest talent, I think, is his marketing skill. He says that with the evolution of Facebook, promoting tournaments is much easier. Dan created a Facebook event, and for a month or two before the tournament, he posted promotional videos, photos of prizes, and hyped superfights. Dan feels superfights are a great way to generate interest in tournaments. He said, “Each club should be represented in order to promote equality and camaraderie and to acknowledge and respect each club.” Club members are more likely to attend and compete themselves if their best fighter is there to represent them in the superfight bracket, which is invitation only and free of charge for competitors. There was a superfight bracket at the Abhaya Open this year also and I really enjoyed watching. The tournament stops and everyone gathers around to watch what are among the most exciting fights of the day. 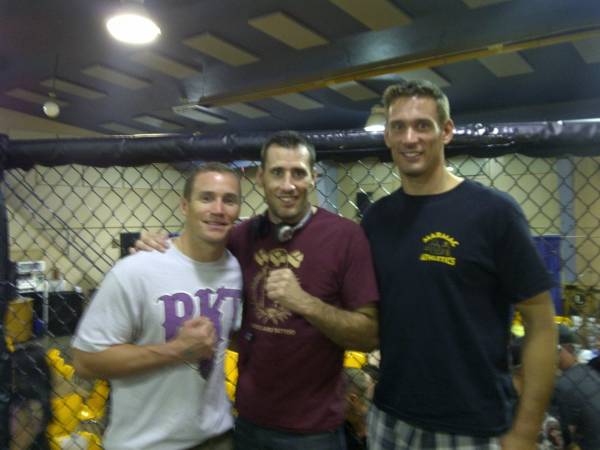 Dan also feels it is important for him and Marmac’s other BJJ instructor, Scott Nauss, to compete in all of the local tournaments to support other clubs and grow the sport. He feels it is important to be protective of our community and to keep revenues local. Our local tournaments are excellent stepping stones to the larger IBJJF tournaments and should not be overlooked. A recurring problem in local tournaments is brackets where different belts and weight classes are combined. This happens due to a small number of entrants, but Dan feels that as we all work to grow the sport, this problem will dissolve. As such, ambassadors for underrepresented demographics such as women and children are recruited to promote the tournament as well.

After the venue is secured and the promotions have gained momentum, volunteers must be recruited in order to ensure the day runs smoothly. In addition to the duties I outlined in my article on volunteering, people are needed to help set up the venue, including moving gear and equipment into storage, cleaning, building a podium area, setting up the weigh-in and registration areas, and returning everything back to normal when it’s all finished. Assigning brackets is the most challenging part of the day and fortunately one of the volunteers this year created an database to generate them, which was much faster than the manual method used in previous years. 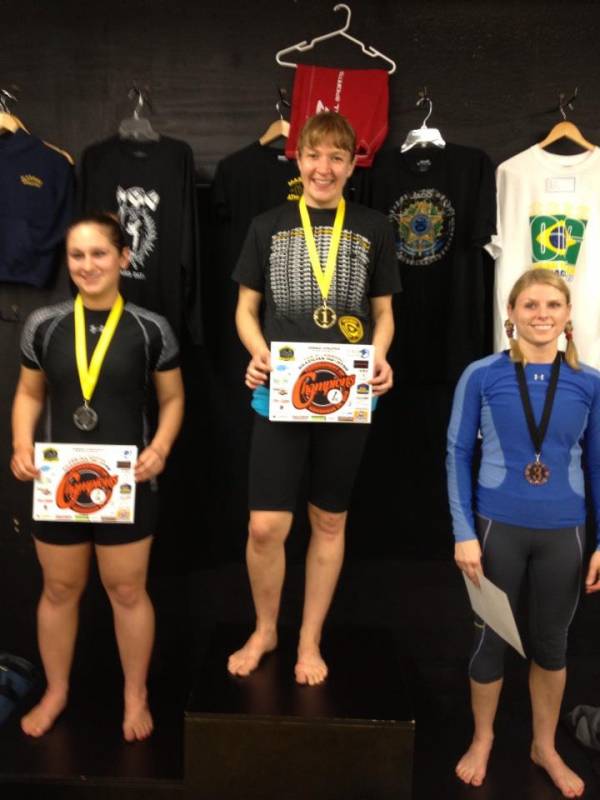 Although Dan was his typical upbeat self on the actual day of the tournament, I remember it was clear that he was frazzled and being pulled in a million directions at once. When it was all over he said, “Never again.” But over time we tend to remember the good. When we spoke recently, Dan was already talking about what he was going to do differently for the 2013 event.

I am really glad the 2012 Tournament of Champions was my first tournament experience. The only thing I wasn’t happy about was that I wasn’t able to compete for silver in the gi division and automatically got bronze due to the timing of my last match. But who can remember something so silly? (#Ican #Iwasrobbed) I’m looking forward to seeing Dan’s promotional efforts for the 2013 tournament and hope to earn a place on the podium again this year.