Curls Get the Girls: How to Build a Better Arm Workout

Despite what the anti-bodybuilding crowd says, isolated arm training can be functional, too. Here’s how to do it the right way.

Bodybuilding has gotten a bad rap over the last few years as “functional fitness” has become the new trend. While full-body exercises like the squat, clean, and deadlift should form the basis of much of your training, you don’t need to get rid of isolated exercises completely.

For all the people who are about to start angrily typing away at the keyboard they’re sitting in front of in their mom’s basement, you can, as always, address your hate mail to idontcarehwhatyouthink@getalife.com.

Despite what the anti-bodybuilding crowd will tell you, isolated arm training can be functional, too. You may have a weakness in a given position or during a certain movement, and it may be that the elbow flexors are responsible for that. Or it may be that you have an injury and need to rebuild strength in a certain area. Or you just may wish your arms were a little fuller or a little bigger.

To start with, here are some things about arm training that I have witnessed that will instantly put you on the gym’s most-hates list. Please avoid these. 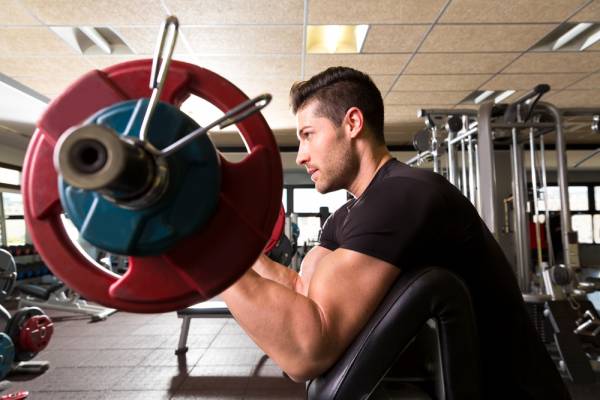 Having said all that, here are some things that will help you decide on what arm exercises you want to do. (If you do turn to the dark side and want to do dedicated arm training, that is.)

There are three main hand positions: supinated, pronated, and neutral or hammer grip:

In the simplest terms, you are mechanically strongest when you use a neutral grip. This position allows a stronger contraction of some of your elbow flexors, specifically the brachioradialis and brachialis. These two muscles lie under the biceps brachii and are better recruited in the hammer position.

In contrast, you’re at your weakest using a pronated grip. Performing biceps work this way isolates the brachialis muscle. Because of this, when working with a pronated grip you will only be able to use around 65-80% of your normal supinated curl weight.

Elbow Position in Relation to the Body

There are only three ways to perform biceps work and vary the placement of your arms:

There are advantages to each, and as each places a different stress on the muscle, it would be wise to train all three.

Here is a list of some arm exercises, along with their hand placement and elbow position. Unfortunately we don’t have photos of all these, but if you can’t figure out how to do a search on the ‘net and find photos, then you’re clearly well on the way to becoming a champion bodybuilder.

Table by Ian King, “How to Write Strength Training Programs,” 1998.

The reasons why you would want to do all these different movements is pretty simple. The biceps has both a long and short head, meaning you can attack it at two different locations. Further, there is a muscle called brachialis, which lies under the biceps and is also an elbow flexor, that is often over-powered by the biceps during elbow flexion. Some grips, such as a reverse (palm-down) curl effectively take the biceps out of the equation, forcing the brachialis to work harder.

Below is a table that allows you to figure which exercise targets your needs the best:

Table by Ian King, “How to Write Strength Training Programs,” 1998.

How to Integrate Arm Training Into Your Program

To make the most of your direct arm training, I suggest beginning with a form of curl that places you in the least favorable mechanical position, such as preacher reverse curls. After you finish all your sets, then move on to the next weakest position, which will be elbows behind the body and palms up. Something like incline dumbbell curls work well here. Finally, move to your strongest position, which will be standing or seated, elbows next to the body, and hands neutral. Seated hammer curls work well.

A simple formula for these would be three sets each, with the final set of each going to concentric failure. For best results, I like to put my direct arm work on days where I’ve done a lot of pressing. I have always found that if I pair pulling and direct biceps work on the same day, then I am too fatigued to get much from the extra arm work. (The same goes for pressing exercises and triceps training. Instead, put triceps on the same day you do back/pulling.)

While it’s not rocket science, having a little understanding of the underlying anatomy can make a big difference between wasting your time in the gym – and an effective arm workout that that will have you needing new shirts.