Feats of Strength: How to Bend a Nail in Half

Lifting weights is cool, but turning nails into a heap of useless metal at your feet is badass.

Bending nails is hugely satisfying. Sure, lifting weights is cool, but there’s something special about turning useful nails into a heap of useless metal at your feet.

This destructive desire is also at play in the previously covered phonebook ripping and card tearing feats of strength. But it is possibly even more satisfying here. Man and woman versus metal.

There are many different styles and types of bending metal. Long bar scrolling, such as rolling a frying pan into a burrito shape, or twisting horseshoes into hearts can take over an hour of dedicated work.

Here we’re going to cover nail bending, also known as short bending. Nail bending requires great hand and wrist strength. Bending a 60D nail (read as sixty penny nail) is known as the entrance into the performing strongman world. When you can do this, you have begun.

There are three main styles of nail bending, all of them legitimate. These are known as the double over, double under, and reverse styles. The strongest benders in the world tend to prefer the double overhand style because you get the best leverage and can minimize the use of the wrists. Here more of the upper body is used.

Personally, I feel strongest in the reverse style. Make sure to experiment and learn all three before you decide to dedicate yourself to one style. In this article, I will be covering the double overhand style.

Both ends of the nail are wrapped in some material. Large amounts of material aid in leverage. Perhaps for this reason, performing strongmen tend to use less material.

Something as simple as a washcloth can be used to wrap the nail. Be sure to toughen up the skin of your hands because you are using a lot of pressure. Leather wraps are the best protective material. Another good option is Cordura, which is included when you buy the Ironmind Bag of Nails. The Cordura must be used to certify in bending the Red Nail, which is an elite feat of strength.

This is a full body movement. You’re going to explode into the nail, tensing up the whole body.

In the following video, the double overhand bending is done right around the six-minute mark. I also give a number of other tips and show the other styles of nail bending.

As with other feats of strength, the quality of the steel can vary greatly. I’ve seen 60D nails that are as tough as Grade 8 bolts (very hard) and others that most in shape people seem to be able to bend way too easily.

You’ll probably want to start with 40D nails, which are easy to find. Here’s is an overly simple progression, using things that are commonly available in most hardware stores:

You can also buy lengths of hot-rolled and cold-rolled steel. The cold-rolled is tougher than the hot-rolled. These can be bought in different thicknesses and then cut to length. One quarter-inch thick cold rolled steel is roughly equivalent to a 60D nail when if is cut to six inches in length. 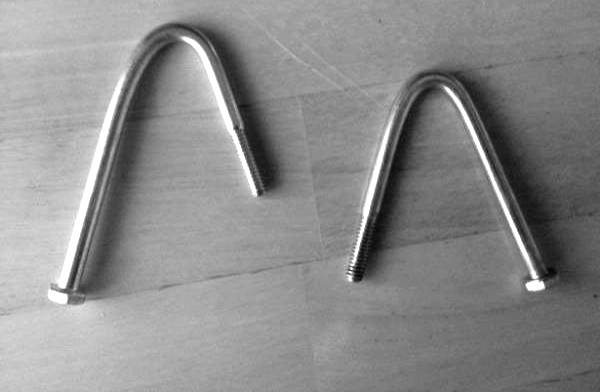 This form of steel allows more progression and regression than nails and bolts, as you can alter the length. Note that the leverage and technique changes slightly with longer and shorter steel. And going too short is not fun, as there is too little to grab.

Start easy to work on technique and build from there. Be careful and ease in slowly. Do too much volume or intensity can damage the ligaments, inflame the elbows, and cause pain. If you feel pain, back off.

Once you’re in the groove, bending four or five pieces of metal for a workout tends to work well. Do this two times a week and you’ll make progress. I like to do high-volume bending one workout per week, then work on higher strength metal on the other workout of the week.

This is a great form of mental toughness training. It is man against steel. It’s up to you whether your willpower will overcome or not.