If you’ve spent much time talking with Jeff Tucker, it wouldn’t surprise you to learn he grew up riding broncos, or that he was a firefighter, police officer, and cheerleader, turned coach.

If you’ve spent much time talking with Jeff Tucker, it probably wouldn’t surprise you to find out he grew up riding broncos. Jeff Tucker is a lot of things: an ex-firefighter, ex-police officer, ex-competitive gymnast, and ex-PhD candidate. According to Tucker, “I’m actually supposed to be a history teacher or an attorney. I haven’t figured out what the hell I’m going to be when I grow up.” So what can a guy like that teach you about gymnastics? A whole lot, it turns out.

Growing up Tucker played football, being a Texan and all, but in middle school he discovered gymnastics fit his body type much better. He had every intention to compete in gymnastics through college, but while out with friends one day he had an accident that would change his life.

Tucker and his friends were visiting Lake Texoma, riding their dune buggy. The dune buggy flipped and the resulting injuries Tucker incurred included broken ribs, a collapsed lung, and damage to his clavicle and shoulder. Tucker calls himself a “lucky bastard” due to the way in which he was rescued from the accident scene:

We were two hours from anywhere and it turned out there were a couple of firemen there that got to me immediately, right after the accident. They were fishing on the shore, saw the accident, came up and stabilized me, and we went to the hospital there in Oklahoma. They wouldn’t take me, so we had to drive all the way down to Irving, Texas. This is in the back of a flatbed pickup truck, driving all the way down to Irving, Texas.

The accident left Tucker sidelined from gymnastics as he waited for his body to heal. Like for most driven athletes, Tucker found the waiting more painful than the injuries. Explained Tucker:

I waited for a long time, and I got so sick of it that I finally just went into the gym and started working out again on the rings. I started doing light stuff, got on the parallel bars and the rings. And then I started trying to do my compulsories again and something didn’t go right with my back. It actually felt so bad that my right hand was just not working, and there was partial paralysis there. So I went to the doctor again and he goes, “Well Jeff, you gotta let your back heal.” And I said, “What’s wrong with my back?” And he said, “Well you broke it in two places!” And nobody had ever told me.

A broken back meant no more gymnastics for Tucker. Going from a high level of performance to slowly watching his basic fitness degrade was a difficult journey. Tucker hung around on the sidelines at the gym and began his first forays into coaching. His senior year of high school he set his sites on the Fort Worth Fire Department and used that as motivation to get himself back into shape.

At the age of nineteen the Fort Worth Fire Department (FWFD) hired him, and so began the next phase of Tucker’s adventure. He would spend seventeen years with the FWFD, including duties as an investigator on the Arson and Bomb Squad, before retiring to become a police officer at Texas Christian University (TCU) instead. 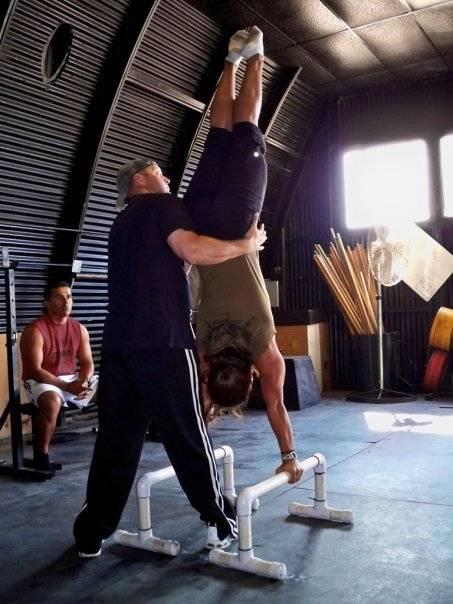 But gymnastics never left Tucker’s blood. While at TCU his intention was to earn his PhD in history. He ended up becoming a gymnastics and cheerleading coach and opening his own gym.

So I started working at the athletic department at TCU, and they asked me to help with the cheerleading and tumbling program they had there, so I started doing that. And then there was some of the intramural gymnastic training they still had. So I got my nose back into it that way. And somebody said, “You really ought to open a gym,” and I agreed with them! So I went ahead and did that. We opened up a really small – like, really small – 1,600 square foot tumbling space across the street from the university. And then we correlate that with what we’ve got at GSX, which is 12,000 square feet. And now I’m at CrossFit. It’s the strangest road I’ve ever been on.

Tucker never did complete his PhD, but the little gymnastics gym he started grew into Global Sports Xtreme (GSX) located in Fort Worth, Texas. While GSX serves as his home base, Tucker also travels the world as the head of CrossFit Gymnastics>. He teaches seminars where he helps athletes of all types learn to communicate with and strengthen their bodies, and he teaches coaches how to teach the basic building blocks of gymnastics and human body movement.

But for Tucker teaching gymnastics is no different from fighting fires. It all comes back to the idea of “service” – of doing service for other human beings. Tucker explained:

So it just makes me feel good that I can play a small part in helping people reach their goals. That’s really the reward. I’m a big guy about being in service. I believe that we’re supposed to be in service, so that’s why I’m so passionate about it. I think in a good way, it’s been an awesome replacement from the fire service. I spent over twenty years there, and that’s all you do there, is you give. It’s been a really nice complement for me to step away and set my own hours, with CrossFit. I couldn’t ask for a better job.

To learn more about Tucker, read part two of our feature interview: