To continue my exploration into the sport of parkour, I decided to talk with Tim Koren, a relatively new traceur who was able to help me understand the moves and how it is trained. 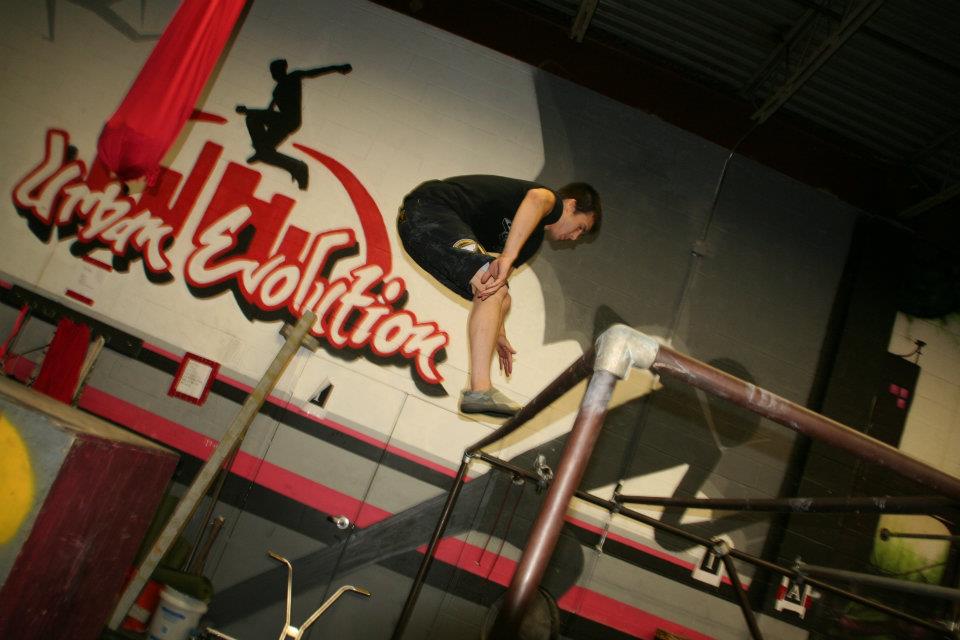 In an earlier story, I described the landscape of parkour, including a brief history and the idea that, at a much-reduced level of athleticism, many of us engage in it on a regular basis. I wanted to know more about parkour from the perspective of an enthusiast, so I asked my Fifty/50 BJJ teammate Tim Koren to share some of his experiences with me. A relatively new traceur, Tim is also a brown belt in Brazilian jiu jitsu and an information technology systems engineer. Tim also happens to be super smart, thoughtful, and articulate about everything he does, which made him a great person to talk to. The first thing I wanted to talk to him about was how he got started in parkour.

Breakdancing turned out to be Tim’s “gateway” activity to parkour. A friend alerted him to a local gym that was offering a promotion for parkour classes; this same gym also had breakdancing classes, which Tim had been taking at a place that was a relatively lengthy commute into Washington, DC, from his home in northern Virginia. Tim explained:

I honestly had no intention whatsoever of ever going to the place, but I guess I tucked the information away in the back of my mind until about a year later. In that time I’d gone through even more BJJ-related injuries than usual, the last of which gave me a lot of time to reflect and think about how I’d be more efficient with my time when I got healthy. I realized that although the breakdancing teacher in DC was extremely good, I wasn’t going to make the progress I wanted with the difficult commute limiting me to only one session a week.

The gym Tim’s friend had mentioned was much closer and also offered other classes, which translated into a more effective use of Tim’s time. The next step to studying parkour happened naturally.

So when I got healthy again, I started doing breakdancing classes and really enjoyed them. But before, during, and after the breakdancing classes I would see the parkour guys working out. Not only did the movements look very different and exciting, but everyone seemed to be extremely positive and to be having a lot of fun with it. I tried out the weekend Introduction to Parkour Basics class and had a great time. 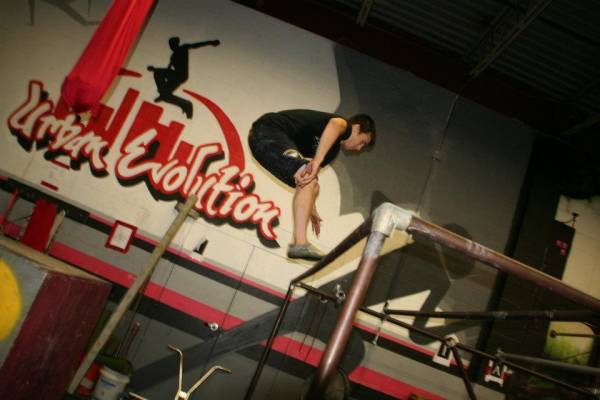 Since then, Tim has been learning parkour at this gym, the evocatively named Urban Evolution, and watching shows such as Ninja Warrior on television has helped fuel his addiction He has found that one of the many cool aspects of Urban Evolution is there isn’t really such a thing as a “typical” class. On one day students might go through a progression of a single move such as vaulting over a three-foot box, then a five-foot box, and then a series of boxes. Another day, the obstacle might be the constant, with the type and difficulty level of techniques for engaging with the obstacle the variable. The actual layout of the gym must change to accommodate these different goals and emphases, so he has a different visual and spatial experience every time he attends.

Students are encouraged to use their creativity while also honing their precision. According to Tim, they could be given a course through the gym of:

Jumping over/off of boxes, climbing up walls, swinging from bars, etc. to get from Point A to Point B. Sometimes they tell you to be creative and to use whatever movements you want to navigate the obstacles; other times they might specify a particular technique to use on a certain obstacle (or to work into your run at some point at your own discretion), and other times you might have to use a specified series of moves to work through the course in a precise manner. The course tends to shift and mutate throughout the class as the instructors add, remove, or adjust obstacles to challenge us.

And yet at other times the instructors set up a bunch of equipment in a random layout and ask us to make our own course using whatever movements we like, perhaps with a requirement to work in x number of techniques or to make the run last a certain amount of time. This really draws out our own creativity and thinking on the fly. This can be coupled with other exercises such as follow-the-leader (running through a course closely behind another participant while attempting to mimic his/her movements), or running through the course in parallel with other traceurs to cultivate spatial awareness. 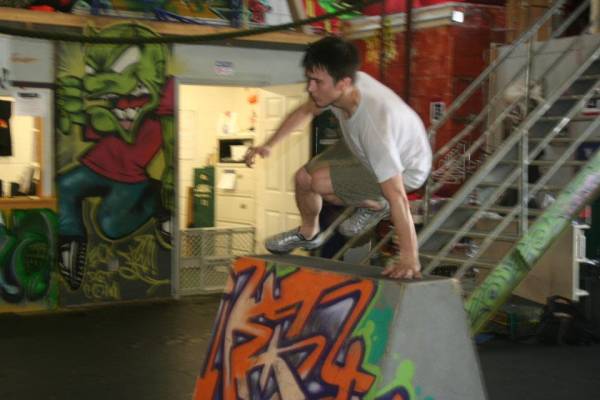 I asked Tim to describe some of the common movements in parkour, and he commented that there is a wide variety. “Some of the notable ones are vaulting, swinging (from rails/bars), climbing, running, precision jumping, rolling (usually to reduce impact from big landings), and quadrupedal movement.” Quadrupedal movement is similar to the gator walk/Spiderman in Brazilian jiu jitsu, where you walk on all fours, bringing the same side hand and foot together and apart alternately. So when the left foot and left hand are together, the right foot and right hand are apart. Free running is a specific style of parkour, and according to Tim, “When you expand the discussion to free running, flips, twists, and spins are also incorporated into the mix.” In part two of our interview, Tim will describe the differences, in practice and in philosophy, between parkour and free running.

Whether he realized it or not, Tim underscored my point about low-skill level parkour manifesting itself in our daily lives, as well as the point that the more athletic moves take time and effort to master. Said Tim, “With parkour moves you might be able to execute a particular vault over a two-foot high box or to traverse a five-foot platform, but it’s a whole other challenge to do the same vault over a six-foot high box or across a ten-foot platform.”

Then Tim said something that made me double check he was communicating in English and that I wasn’t experiencing some kind of aphasia:

I’ve just started working on the Double Kong vault and transitioning it to the dash vault, and I can’t do it very consistently yet. On the free running side I’ve been spending a lot of time trying to learn how to properly do the front tuck.

Because in the case of parkour seeing is believing, here is a short (twenty second) video of a Double Kong:

And one of a dash:

These are just a very few of the myriad vaults in parkour, and vaults are just a few of the categories of movements. Thus, parkour becomes very sophisticated very quickly.

To wit, traceurs/traceuses focus on landing and stepping silently, believing it helps them move fluidly and waste less energy. Said Tim, “Experienced traceurs not only move much more silently, but they are very good at using the energy from one move to help power the next one. For example, jumping down from a wall and landing in a squat, then using the remaining kinetic energy to jump directly out of the squat toward the next obstacle.” In a manner consistent with this mindset, Tim noted that practitioners prefer light shoes with thin soles such as Vibram FiveFingers and Feiyues, as these “allow a better feel for the environment and more natural movements.” They also prefer to use their hands and feet “when summiting an obstacle,” which they find to be safer than elbows and knees.

Read part two of our interview: