Interview with Guro Marc Denny of the Dog Brothers, Part 2: The Collective

On the heels of a story I wrote about the Dog Brothers’ annual Gathering of the Pack, I had the opportunity to interview in more depth Guro Marc “Crafty Dog” Denny, who is “the Guiding Force” of the Dog Brothers. What follows is my attempt to capture our conversation, reflecting the individual experience of being a Dog Brother (part one) and the philosophy and priorities of the collective (part two) from Marc’s perspective. Part two is below or click here to read part one.

Marc doesn’t really have a typical day as leader of the Pack. He teaches private lessons and a few classes in Dog Brothers Martial Arts each week. Students fly in to train with him on a regular basis and invite him to give seminars. He also keeps up with his own training, at 59 years old. He doesn’t maintain a school as such, however.

Marc is an avid reader, as evidenced by the philosophical traditions within which he roots his ideas, and also spends lots of time on the Internet and communicating with people. It is through such communications that he has had the opportunity to see how the Dog Brothers philosophy manifests itself in different geographic and cultural contexts. While there are certain primal essences that persist regardless of differences in these contexts, Marc does note some differences in how Dog Brothers, Candidate Dog Brothers, and Dogs all around the world live the Dog Brothers’ credos. For instance, in US events, people are allowed to hide hard aluminum training knives on their bodies and employ them mid-fight. While they are training knives, Marc observes “it’s a noticeable event in your day” to be on the business end of one. Such practice helps people remember to keep track of what their adversary’s hands are doing; it can be dangerous to assume a fight that starts empty handed will necessarily stay that way. This helps practitioners learn how to assess a fight more accurately.

Europeans, however, tend not to like the use of the knives, so they don’t use them, Marc observes. Instead, they approach the fight experience in a much more ritualized fashion. European Pack Gatherings take place in Berne, Switzerland, which is not particularly violent or primal. It’s not that one is right or wrong, though.

Marc has said the day the Dog Brothers curriculum ceases to evolve is the day it starts to die. The system has three basic areas: ritual stick contact fighting, “Kali Tudo” tm, DBMA’s empty hand system to test and adrenalize empty hand movements for street application, and the interface of gun, knife, and empty hand. In DBMA, this is called “DLO,” for “Die Less Often”. Recently, the work Marc has been doing has resulted in much evolution in Kali Tudo, where empty hand and weapons come together in real contact stick fighting. This is where mixed martial arts and weaponry could intersect and practitioners could test that combination in the adrenal state. To Marc, this helps reduce the misconceptions people might have when they practice only empty hand techniques; they might be able to execute an effective takedown—but get stabbed in the process. Marc is also exploring the concept of double stick fighting, in keeping with the fact that we have two arms, not just one for single stick fighting. 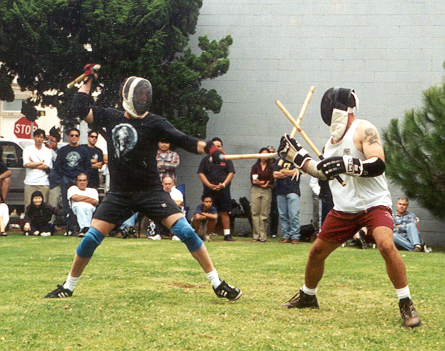 In answer to the question about whether there is a place for Dog Sisters in the Pack and whether the Dog Brothers’ beliefs and credo could benefit women as well, Marc noted there are a few female tribe members. It’s obviously less common for women, but there are some dedicated and technical female members who actually have gravitated toward the “bitch” label. Marc’s stance is that in the spotlight of a Dog Brothers Gathering women should fight women and men should fight men. A woman testing herself against men—and indeed most of the violence that women might face comes from men—is best done in “backyard” or other private contexts.

As a closing note, Marc invited readers to go to dogbrothers.com and click on “Where to Begin” to get further information. He noted most people who come to the website train for the fights but do not actually do them; the percentage of people who actually participate in the Gatherings is small. But to be around people who are fighting, and to train to be a good training partner for someone who does fight is enjoyable and beneficial for both parties. Even regular people can enjoy the three elements of the Dog Brothers training: they can have fun, they can get fit, and they can learn something functional should things ever go sideways.