Judo and Life: From Beginners to Elites With AnnMaria De Mars and Kayla Harrison

Ann Maria De Mars is a world-class judo champion, but she prefers to talk about her middle school students. Hear what both De Mars and her Olympic gold medal winning student Kayla say about judo. 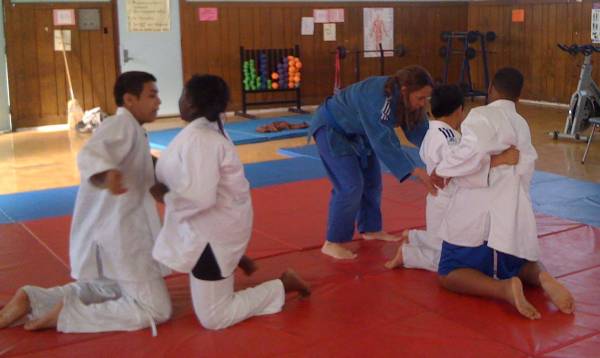 Most high school football players will not be drafted into the NFL, and most judo students will not have the opportunity to join the U.S. national team. When I spoke to judo teacher Dr. AnnMaria De Mars, she didn’t want to talk about elite athletes. She was one herself, and her daughter, Ronda Rousey, is another, as an Olympic bronze medalist in judo (in 2008) and current UFC World Champion. But De Mars was interested in talking about the students at Samuel Gompers Middle School in Central Los Angeles, where she coaches the judo program.

Like most kids, De Mars said, the students there are too sedentary. When they start the judo program, they often aren’t athletic at all, much less elite. Many lack the basic fitness level that even introductory judo requires. The same is often true of adult beginners, who might be starting judo or another martial art as a more interesting alternative to a traditional gym, but with little or no recent training experience.

But, De Mars said, everyone starts somewhere. Her program uses a lot of bodyweight calisthenics and simple drills. Some, like squats and jumping jacks, address general fitness, while others are more judo-specific. The “shrimp exercise,” for example develops core strength but is especially relevant for ground defense in judo. Simple falls from the knees and basic mat work likewise develop fitness and judo skills in parallel. The goal is to push students hard enough to improve, but not so hard that they hate it and quit.

De Mars herself faced a similar situation as a beginner. As she told the story, she was twelve years old, “a short, fat kid with thick glasses.” Her mother took her to the local YMCA and told her to “join something.” This was before the passage of Title IX, a U.S. law that required gender parity in sports programs, and her options were limited. Many sports just didn’t accept girls. The available choices were swimming, track, and judo. Judo, which requires neither running nor revealing clothing, turned out to be the best fit. DeMars credits a good coach for launching a career that ultimately made her the first American to win a gold medal at the World Judo Championships (in 1984). 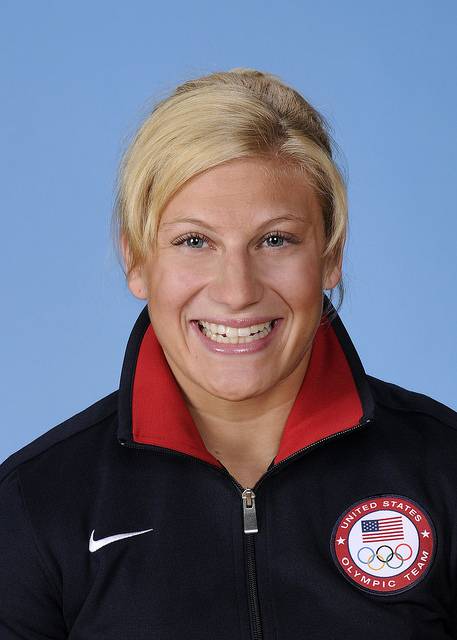 Kayla Harrison, the student of De Mars’ co-author Jim Pedro, Sr., started judo when she was six and has gone far beyond the basic calisthenics of the beginner program. At the 2012 Olympics in London, Harrision became the first American to win an Olympic gold medal in judo. Still, one of her two two-hour judo workouts a day focuses on drills, practicing techniques and parts of techniques over and over. The second concentrates on sparring and free practice. When training full time, she adds five days per week of running and weight training to her six days per week of judo.

With a training load that heavy, Harrison says recovery is critical. “I don’t go out. I train, I eat dinner, I go to bed. That’s pretty much it.” Eight hours of sleep is the minimum, plus naps. She gets a massage once a week, and avoids processed foods.

Additional challenges come with the need to combine her training with a heavy travel and competition schedule. When I spoke to Harrison, she hadn’t yet returned to fulltime training after the London Olympics. She’d resumed training in January, and was preparing for her fourth post-Olympics competition, the PanAm Championships in Costa Rica. Competing in the 70 kg division, down from her 78 kg Olympic weight class, she won the bronze medal and helped Team USA take fourth place overall. She described her training as “a grind, but a beautiful grind.”

“I’m very fortunate. I have wonderful teammates, and I get to do something I love.” Asked about life after judo, she scoffed, clearly focused on the 2016 Olympics in Rio de Janiero, Brazil. “There’s nothing like standing on that podium. It makes it all worth it.”

Both De Mars and Harrison dismissed the importance of “talent,” in favor of characteristics like hard work and perseverance. Still, the sheer level of effort required to reach and maintain elite performance guarantees that most judoka will be closer to the Samuel Gompers Middle School students than the national team. 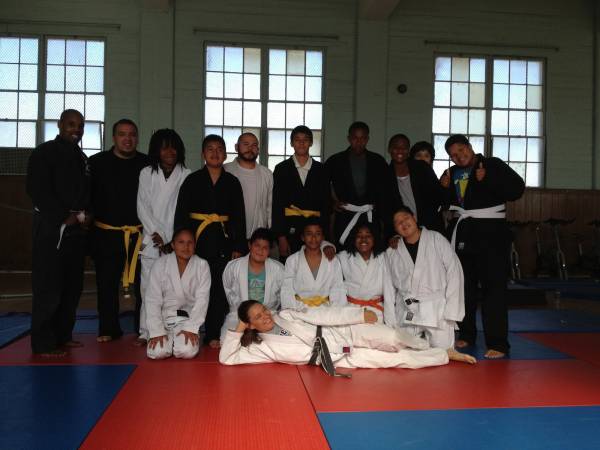 That’s okay. Judo has a lot to offer sixty-year-old recreational athletes, too. As Harrison explained, recreational judo can be as intense as sport judo and should be taken just as seriously. “You get out what you put into it. When I talk to groups, I try to share with them how transformative judo can be. It’s a great mind-body exercise. I hope it changes someone else’s life like it has changed mine.”

One of the life-changing aspects of martial arts for many people is the opportunity to change their relationship with fear. Adult beginners in particular are often motivated by real-world fears like a desire for self-defense skills. Martial arts training itself involves fear to some degree – fear of getting hit, fear of getting thrown, fear of injury and failure. In judo, first you are thrown, then your opponent falls on top of you to pin you. It’s the kind of thing that can make even other martial artists a little nervous.

So I asked how judoka approach the fear. The response was a verbal shrug. “We learn at the edges of our experience,” said Harrison, meaning desensitization helps people work up to more and more aggressive throws and more demanding falls. 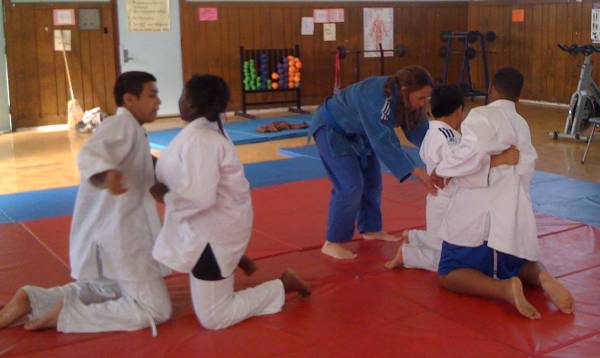 De Mars was a little more expansive. “Everyone starts somewhere,” she emphasized. Beginners start with falls from the knees, simple drills, just getting used to the transition from standing to the ground. Mats help, too: she noted that her program at Samuel Gompers Middle School would welcome an additional crash mat.

But Harrison also noted that the word “judo” (柔道 in Japanese) means “gentle way.” The first things beginners learn are how to fall and how to protect themselves. In competition, being thrown means that you’ve lost. But drills and other non-competitive practice put more emphasis on flowing movement and safe technique. At that level, she said, judo can be practiced by anyone, both elite competitors and older recreational athletes, and anyone can benefit from it. “You can be amazed by what’s possible,” she said.

AnnMaria De Mars’s judo career includes wins at the USJA Junior Nationals, US Senior Nationals, and the US Open, as well as the 1984 World Judo Championships, where she was the first American to win a gold medal. She co-authored “Winning on the Ground: Training and Techniques for Judo and MMA Fighters” with judo coach James Pedro, Sr.

Kayla Harrison’s judo accomplishments include gold medals at the 2010 World Judo Championships, the 2011 Pan American Championships, and the 2012 Olympic Games. She trains with coach Jimmy Pedro, in Wakefield, Massachusetts. Off the mat, she is an advocate for survivors of child sexual abuse.

All other photos courtesy of AnnMaria De Mars.