Metabolic Breathing Ladders: Training in a State of Controlled Panic

The “forgotten” variable in your training is your breathing patterns. Breathing ladders will provide a challenge like no other you’ve experience, as well as offering great results.

For the majority of us, breathing is one of those qualities that we loftily take for granted. We depend on inhaling thousands of breaths a day, but do so without conscious thought of when they actually occur. Until your breathing is challenged, there may not be much thought into how precious each gasp may be. Being trapped in a roomed filled with smoke, having a panic attack, being crutched by an asthma attack, or maybe finishing a brutal metabolic finisher can all be events that bring forth immense respect for oxygen intake.

Within a given workout there are multiple variables either a trainer or you can dictate. The movements you will perform, the loads with which you will be challenged, the number of reps you will do, or even how long your rest period will be. These variables can be used mathematically to bring forth sought after results. Whether it is to put on that extra ten pounds of mass or maybe shed the last few pounds before the summer, these variables when used correctly are the key in opening the door of success.

The “forgotten” variable, the one least-often controlled while training, is your breathing patterns. When someone tells you to rest one minute in between sets there is no fine print stating how many breaths you are allotted within that given rest period. Whether you fill your rest period with calm, meditative breaths or breathe like you are going into labor, for the most part, the program does not really care.

But it is time to start caring. It’s time to challenge yourself aerobically unlike you have ever done before and insert metabolic breathing ladders into your training routine.

Originally created by Steve McNamara of the RKC, metabolic breathing ladders consist of a high-volume workload executed at a relatively low rate of intensity. The exercises that best fuel the correct end results of metabolic breathing ladders are compound movements. Ideal movements for the ladders would be such exercises as kettlebell swings, dumbbell thrusters, and front squats. These compound movements will place a significantly larger demand on your oxygen intake, much greater than that of, say, a bench press, which involves fewer joints. The body’s ability to deal with this increased demand will in turn lead to more regulated breathing during other metabolic type exercises or sports and can significantly raise your vO2 max.

Metabolic breathing ladders consist of a 1:1 work to fixed breath ratio. Meaning, for every rep you complete, your rest period consists of identically that many breaths. If you complete five thrusters, then five deep breaths will follow. Just like regular programming, metabolic breathing ladders bring forth three distinct variables that directly correlate to how severe of an oxygen demand is created. The three variables are the movement, the load of the object, and rep scheme of the ladder.

Using a big compound movement with a significant load will call for extreme efficiency of oxygen utilization. While determining your rep scheme, understand that ladders that continuously climb up to a given variable will be ones that you should start a client out with. These ladders may be moderately taxing on the muscles due to increased reps and therefore work done, but the breathing also increases by number, thus not placing a high demand. An example of an increasing ladder could look like 1-20, starting at 1 rep and breath and increasing both by one until your last set will be 20 reps and 20 breaths.

When considering ramping up the intensity and bringing out the true potential controlled state of panic, you should use an ascending ladder scheme followed by a descending. In this situation a ladder may look something like 1-20, then back down from 20-1. After the ladder has reached its peak, even though the reps will then decrease, the amounts of breaths taken do as well. This immediate decrease in oxygen intake when it is most needed brings forth a state of panic. It’s a way to make your mind think it is quickly losing oxygen (almost if you drastically changed altitudes), while you are really just restricting the lungs’ ability to replenish the supply.

During these demanding times, you will experience a switch from the traditional nose breathing into transferring through the mouth with panicking gasps. If that oxygen demand becomes high enough and the body feels as though it is suffocating or quitting, this means the ladder was a success. You now have an idea of how far your oxygen intake can be challenged and have a baseline of your breathing efficiency. 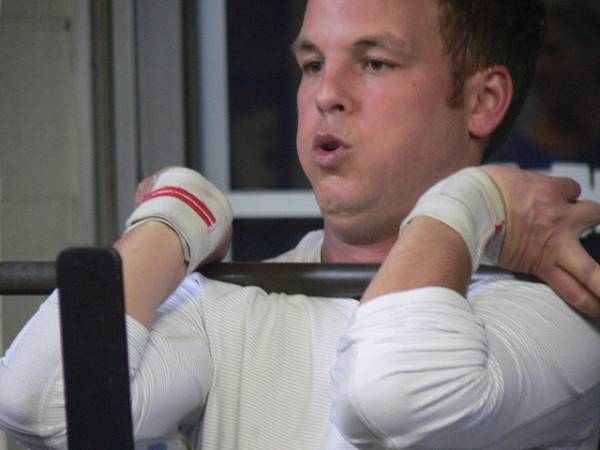 Metabolic breathing ladders are an excellent way to increase your VO2 max and tolerance to push through demanding workouts. We are so used to working in a state of free breathing where there are no guidelines, and that can hinder us athletically. If you just completed a tough set or even an intense sprint, you may not start up again until you have fully caught your breath. By doing so, you are letting your cardiorespiratory system return back to being comfortable and not making yourself any better, aerobically speaking.

Ultimately, using programmed strict breathing will not only enable you to push through barriers you never thought possible, but also give you a concrete guideline so you do not just stare at the bar or kettlebells until you feel ready. So pick a movement, a load, and a scheme, and be willingly ready to step into a state of controlled panic.