Qualifying for Rio: A Tale of Two Cities

Thoughts on my experience officiating at both the American and Canadian Weightlifting Olympic Trials.

Once again, it’s the spring of an Olympic year, a time when all weightlifters start to think about the Games, Olympic trials, and securing a ticket to Rio de Janiero. The USAW held the Senior National and Olympic Trials in early May, while the Canadian Federation held theirs two weeks later. I was fortunate enough to officiate for both events.

The U.S. championships were held in Salt Lake City’s Convention Center, the most impressive venue for a nationals’ event that I have ever witnessed. The hall housed three platforms to accommodate the large number of entrants (about 345) in three days. Each platform required a full complement of officials and an extensive amount of electronic equipment to run a high-level competition. The standard of presentation was high enough to approach that of a world championship held not so many years ago.

Also impressive were the warm-up facilities. There were eighteen warm-up platforms, with plenty of room between each to avoid crowding. When I heard that the three platform format would be used, I was immediately curious as to how well such a setup would work. I had seen this decades ago in a small local meet, but never on a national stage.

The answer is that it works very well. The setup was organized by a professional event management firm, and there were a large number of USA officials who kept technical operations running smoothly. For that we should thank Corinne Grotenhuis for the assignment of the officials. I have held this position many times, and I can tell you that it is not an easy one, even with only one platform.

As for the athletes, there were the usual number of fantastic performances. Stand outs were Kendrick Farris and Norik Vardanian in the 94’s and Cain Wilkes in the supers. No U.S. men qualified for the Olympics, though that may change after the Pan-American championships qualifier. However, three women were named to the Olympic team: Morghan King (48 kg), Jenny Arthur (69 kg), and 2012 veteran Sarah Robles (75+). Arthur had qualified for Rio prior to nationals by earning the top cumulative score of any U.S. weightlifter at the 2014 and 2015 world championships, where she finished 14th and eighth.

One of the three platforms at U.S. Nationals. [Photo courtesy of Dresdin Archibald]

Two weeks later I was off to the Vancouver suburb of Richmond, BC for the Canadian senior championships. The event was held in the Olympic Oval, and with only one platform in operation. Competition started on Friday to accommodate all 170 lifters, and nearly 100 more had qualified but did not enter.

Like the U.S., Canada has experienced a CrossFit-led membership explosion and subsequent increase in the number of national-level athletes. We also now have a problem in accommodating them all in competitions.

There are a number of solutions to this problem. One is to raise the qualifying totals. This has been done to a certain extent, but lifters trained harder and met the new standard. If we raise them even more another problem develops. The province of Québec would then have most of the athletes, while the smaller provinces would have fewer. Politically, raising the qualifying totals by too much is a nonstarter.

Another solution is to spread the competition over more days. Nationals are always held over the May long weekend, but because of meetings and travel time, people already ask their bosses for an extra day off tacked onto an already long weekend.

That leaves us with the multiple platform option. This would solve both of the above problems, so I was quite interested in how the U.S. Federation ran such events. While we have a problem both in funding and manpower, this is probably the best route, although it will take some forbearance on the part of both federations. Both events had a considerable number of new faces in the officiating ranks. This resulted in a few awkward moments as some were involved in situations they had not faced before. Time will be needed to find and train a new cadre of officials both at a local and national level.

Another result of the rising number of CrossFitters at our national competition is that they exceed the performances of regular weightlifters. I wondered why that might be. The answer is sobering, but CrossFitters might be gifted athletes in the first place. CrossFit training is quite intensive, to the point that only the gifted will survive for long. Those that do might progress in weightlifting at a faster rate. This is only speculation, but some CrossFit Games performances are impressive enough to give that idea credence. Technique, however, is sometimes lacking, as evidenced by the large number of misses at both events.

Canada currently has not qualified anyone for the Olympics, but that may change after the Pan-Ams. We had a number of our athletes pass up the nationals in favor of the Pan-Ams. This no doubt contributed to the estimated 40kg deficit in totals across the board compared to that of the USA winners. The only ones showing parity were the women’s 63kg and the men’s 62kg, where only 4kg separated the Canucks and the Yanks. 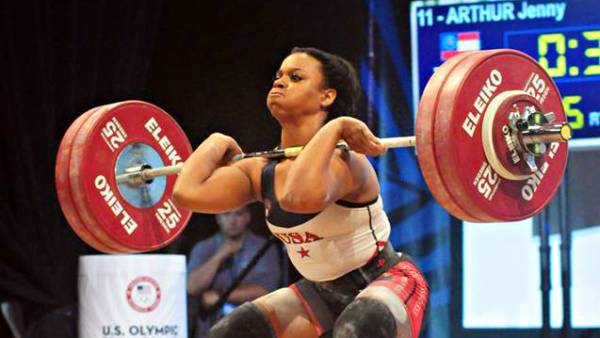 The International Weightlifting Federation (IWF) has big expectations for the USAW. For weightlifting to continue its recent rise in popularity, it is necessary for the U.S. to improve both its athletes and its level of organization. The U.S. has a great presence in the worldwide communication industry, as we’ve seen from the increase of Olympic lifts shown in the media over the past few years. While the videos are usually associated with CrossFit, they expose the snatch and clean and jerk to a wide variety of people. An American world champion would go a long way towards increasing public acceptance of the sport.

The same holds true in Canada, the UK, Australia, and the rest of the Anglosphere. Over the years, the U.S. and Canada have had a greater-than-expected presence on the various IWF committees. Our influence at the administration level must be matched with that on the platform if we are to maintain our position.

Both countries are making progress in the promotion of our sport. New challenges have unfolded, but they are being met in a more optimistic environment. A new generation is taking over, one that I have great faith in. In particular, the new USAW CEO, Phil Andrews, is especially well poised to take on these challenges. Heck, he was even born in my hometown of Edmonton, Alberta.

In closing, I would like to thank all of those responsible for the hosting of the U.S. and Canadian national championships. This takes a tremendous amount of work on the part of a usually unsung local committee that gets too little recognition.

20 Tips That Will Make You Better at Olympic Weightlifting

Coaches: Are you saying the right thing?