The Peasants Are Revolting: It’s Time for CrossFit Affiliates to Take Back Their Name

Shana Alverson critiqued CrossFit and had her post deleted. Why is this a big deal and why should others get involved? Let me explain.

When I wrote the article in response to an inappropriate picture of Talayna Fortunato being posted on the CrossFit Facebook page, I had no agenda. My intent was merely to express my own disappointment, anger, and opinion as to the effect of posting such an image on Talayna, women of this sport, and the CrossFit community at large. If there was any agenda at all, it was perhaps to just start a conversation. And that it did.

The response was overwhelming. I personally heard from dozens of people in addition to the hundreds of comments that followed on Breaking Muscle and Facebook. 99.9% of the comments were positive and supportive. Several of the personal emails I received were extremely gracious in their support. A few of the emails came from box owners who shared the same concerns that I expressed, but confided that the risk of speaking out had to be weighed carefully against the risk of reprisals from CrossFit Headquarters.

The risk of speaking out. Seems like the antithesis of a company that professes itself to be highly libertarian it its construction. But the reality is CrossFit has a history of dropping the hammer on those who would dare to be critical of them in a public way, so affiliates are justified in their concern about speaking out.

One shockingly public example can be found here, on the CrossFit discussion forums. What you see in the second comment on the page in question is Greg Glassman himself publicly firing an affiliate, right before our very eyes. The disaffiliation came on the heels of the affiliate posting some rather nebulous “HQ doesn’t care about us” comments. Greg took that personally and flogged the affiliate owner in the town square, right then and there. It’s a fascinating read. So it’s no wonder affiliates are afraid to speak out. We’ve watched a litany of good people go down, from Robb Wolf to Mark Rippetoe, from James Fitzgerald to Greg Everett. Making waves is a dangerous thing.

Shana is a four-time CrossFit Games competitor in the women’s individual category (2009, 2010, 2011, 2012) and owner of CrossFit East Decatur in Georgia. Coming on the heels of a CrossFit Facebook post that clearly seemed designed to shame Olympic weightlifter Kendrick Ferris, and the most recent female crotch shot, Shana clearly had enough, and took to her Facebook page and posted this:

She then took it one step farther, walked directly up to the gaping maw that is the CrossFit social media team, and unleashed her slingshot. She posted the same post on the CrossFit Facebook page.

Within what seemed like seconds, Russ Greene was already engaging her. If you have never watched Russ work, he is highly skilled at obfuscating your comments in any given situation and leading you down a primrose path until he makes some final comment like “Well, Pat, if you either refuse to or are unable to provide the weight of a cloud, your original point falls flat.” He’s really quite good.

While sparing you the details of the back and forth, suffice it to say, Russ did his best to pull Shana down the wormhole, and she refused to go quietly. Lots of others chimed in in support of Shana’s words, and then, suddenly…

First of all, CrossFit HQ prides itself in being willing to engage in debate in a public forum and secondary to that they have admitted they rarely ever take down content. Even Greg Glassman has said, “Affiliates, be critical, be cynical, and do so publicly…” (See the forums post referenced above.) CrossFit explained on Twitter the reason for the post being removed as, “We prefer to talk to our affiliates directly about their concerns. We reached out to her to do so.”

When clothing company HTFU challenged CrossFit’s cease and desist rather publicly, then deleted the subsequent discussion on Facebook, Russ Greene wrote this:

The CrossFit media guys seem incredulous that someone might squelch an “honest discussion” but quickly silenced Shana Alverson when she posted what was a fairly even-handed, heartfelt post. When she said, “Your name is my name,” she made the very point that many affiliates around the world are thinking when they see these titillating crotch shots and hubris-filled us-versus-them posts, which is, ultimately: “I am trying to run a business here. This isn’t helping.”

So why squelch the discussion? The idea that “we prefer to talk to our affiliates directly” rings fairly disingenuous. Greg Glassman proved that when he fired Phillip Mancini on the message boards. When Freddy Camacho of CrossFit One World posted a rather impassioned rant on his Facebook page about CrossFit HQ allowing affiliates to open too close to one another, “The Russes” took him on quite vigorously to the extent that they ultimately extracted an apology from him.

Why then, delete Shana’s post? It wasn’t anti-CrossFit and it wasn’t mean-spirited. It’s so uncharacteristic. I’ll tell you why. Because this one was different.

What makes this different is that this may be the first time that a high profile, well respected, Games-level athlete has spoken up against the shenanigans of CrossFit Media. Until now, it’s been a fairly spotty history of critics, usually either old, masters-aged guys like myself and Freddy or various affiliates who may comment on a post here or there. But a four-time CrossFit Games athlete? Unheard of.

Using Russ Greene’s own words, “One wonders what (CrossFit) is so scared of. It’s just an honest discussion…”

And it is an honest discussion. There has been a groundswell of pushback against the way CrossFit’s social media team is portraying the sport. If you look at the comments in this post (pictured right), it’s a near universal condemnation of CrossFit’s posting of something so ludicrous that one can almost see Fonzie in skis and his leather jacket.

But the upshot is that via the brushes that are Facebook, Instagram, and Twitter, CrossFit, Inc., is painting the picture of CrossFit to the world at large, to those both inside and outside the community, including its affiliates. As Shana so wisely pointed out, “Your name is my name, too.”

And as much as CFHQ touts its libertarian, loosely-based affiliate network with its “the cream rises” and “we don’t tell you how to run your business” stance, the reality is each and every affiliate trying to grow their business either benefits from or has to dodge the Facebook grenades tossed by the media team. And I have personally heard from affiliates, more than one, that potential clients ask about this stuff.

So yes, misogynistic, hubristic, fire-starting social media posts can impact the affiliates. No question about it. Greg Glassman himself said, “The only place where we are perfect is in our concern and love for affiliates.” Shouldn’t the media team have this engraved on a placard on their desks and read it before they post something that is going to cause a small CrossFit box in Anchorage, Alaska to have to defend the program? 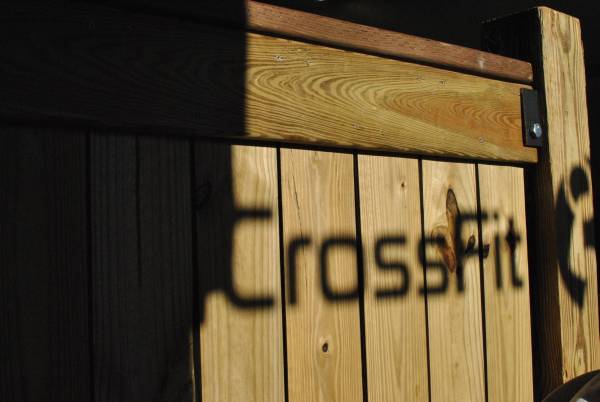 CrossFit has specifically stated that they don’t let the possible negative Facebook comments dictate what they post. But if, as Shana Alverson said, “Your name is my name, too,” shouldn’t they? Meaning, for every “This is why people hate CrossFit!” comment, is it too far of a stretch to imagine the box name after the word “CrossFit” and at least be empathetic to what the affiliates are dealing with on a daily basis? “This is why people hate CrossFit (Anchorage)!” or “Seriously guys? These continued posts of female crotches give CrossFit (East Decatur) a bad name! Stop it!” This is the meaning of your name is my name, too.

CrossFit has 7,500 or so hard-working affiliates who are your best sales people. This is a massive built-in sales force. For every affiliate that opens, CrossFit Inc. can count on a litany of new Level 1 coaches coming down the pike and probably three new boxes that will branch out from that one, and as the brand grows, the profits grow, the sport grows, and the world gets fitter.

So every time an affiliate has to wince when they open Facebook, then CrossFit, you are hurting your kids. They love you unconditionally, but they just want you to stop coming home drunk and forcing them to make up excuses to their friends as to why you slept in the front yard.

As for the affiliates, it’s time to rally behind Shana Alverson and CrossFit East Decatur. You have a voice. Don’t be afraid to use it. How equitable is it that CrossFit enjoys the enviable position of being able to throw down loudly and publicly via social media but demands its affiliates voice concerns privately?

“The only place where we are perfect is in our concern and love for affiliates.” Okay, CrossFit, time to prove it.