The Physiology of a Rear Naked Choke, or: What Happens When You Get Choked Out

Chances are if you train BJJ, you’ve been on the receiving end of a rear naked choke. Have you ever wondered what physiological mechanisms of the choke are? Why you actually pass out?

If you train Brazilian jiu jitsu (BJJ), chances are you’ve been on the receiving end of a rear naked choke (RNC). You know just by feel that what’s happening isn’t good for you. But have you ever wondered about the precise physiological mechanisms at work – why you lose consciousness if you don’t tap in time? I asked Dr. Charlie Moore, an emergency medicine/trauma doctor who works at one of the major trauma centers in Maryland, for an explanation we laypeople can understand.

With a medical degree from Columbia and a bachelor’s degree from Yale, Dr. Charlie (as we like to call him at Fifty/50 BJJ, where he is a student) was motivated to learn BJJ for two reasons. First, he nurtures a general love of athletics as evidenced by the fact he is a near-elite triathlete, and second, “in the six months prior joining the gym, I’d been assaulted twice by dudes jacked up on drugs and was tired of curling up and taking a beating.” Fair enough!

According to Dr. Charlie, the rear naked choke is a “so-called blood choke ([one of] those that impede blood flow from the heart to the brain),” as opposed to an “asphyxia choke (those that obstruct airflow, commonly by way of windpipe compression).”

To understand what happens when the rear naked choke is correctly applied, we need some basic anatomical definitions:

What Happens When the Choke Is Applied 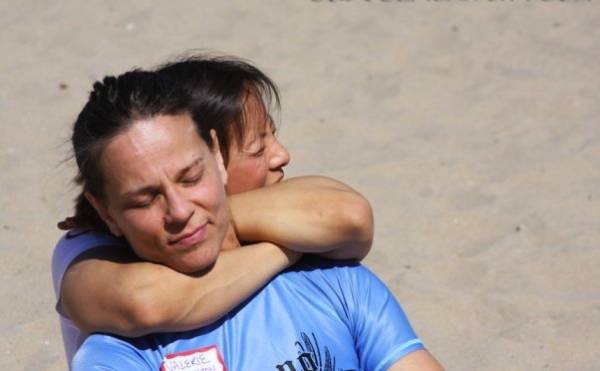 Dr. Charlie explained, “Application of the RNC first causes compression of the jugular vein, significantly hindering blood return from the head (and brain) to the heart. The recipient begins to feel flushed – engorged in the face and brow. Further pressure narrows the carotids and reduces the blood flow to the brain.”

Dr. Charlie cited a few studies to explain what happens next. One study found that “correct application of the RNC can completely (close) the carotid and that the degree of compression depended more upon the direction of the force rather than its magnitude.” The same study found, “When the choke was applied correctly, and low on the neck, that the vertebral arteries were also significantly compressed.” Remember these are the arteries that provide blood to the brain, and all are affected.

Another study measured the heart rates, rate change of blood pressure, and blood flow through the carotids of 24 healthy police officers (27-40 years old, 21 male, 3 female) while they experienced the RNC, which he also refers to as “bilateral carotid compression.”

The author found that, “16 of the 24 officers lost consciousness in 7-10 seconds with only 84% compression of the carotids. Four tapped out before unconsciousness and four managed to maintain consciousness – but had significantly less carotid compression.” And Dr. Charlie noted that, “All subjects regained consciousness without any lasting deficit or injury.”

In short, said Dr. Charlie, “You lock the choke, compressing venous outflow. The face gets flushed. The choke tightens down, the opponent’s carotids narrow, blood flow falls below a critical level, the vision closes in, and consciousness is lost.”

Is There Potential for Lasting Injury?

In theory, Dr. Charlie noted, there are three ways the RNC could cause lasting injury. The first involves the carotid body. When the carotid body senses increased pressure (from the blood itself or from, say, a choke), it will direct the heart to reduce heart rate and the amount of blood squeezed from the heart’s chambers with each beat. In individuals in whom this mechanism is very sensitive, said Dr. Charlie, “The choke could (theoretically) lead to profound and prolonged reduction in cardiac output (blood flow from the heart) after release. In emergency medicine, we sometimes see patients who have fainted due to over-sensitive carotid bodies – so-called necktie or shaving syncope.”

“The second way a RNC could cause lasting injury would be when its misapplication causes injury to the cervical spine – i.e. it becomes a neck crank.” (Surely, many readers will rub their necks in sympathy upon reading this.)

Third, Dr. Charlie noted that while a healthy brain should be able to survive lack of blood flow for up to five minutes, “The duration of carotid compression prior to damage (the duration of cerebral anoxia [or lack of oxygen to the brain]) can be significantly lower” in individuals who are “in poor vascular health or have depleted their blood oxygen levels due to drug use.“

A final piece of food for thought from Dr. Charlie related to the fact that “significant anatomic differences exist between the healthy participants of these studies and children (especially under 10 years), the elderly and those with Down syndrome, differences that dramatically alter the safety of the choke.” So if you are having an argument with Grandpa Joe, try to talk it out.

And the next time you feel the all-too-familiar sensations attendant upon a rear naked choke, you’ll know exactly what’s happening to you and why!

3. Yamasaki S, Takase I et al. Measurement of force to obstruct the cervical arteries and distribution of tension exerted on a ligature in hanging. Leg Med (Tokyo). 2009 Jul;11(4)175-80.