The Time Is Now: Stand Up for Gender Equality in CrossFit

Take action to stop gender inequality in sports. It starts with you.

In Part One of this series, I discussed gender inequality in CrossFit and in women’s sports at large. It takes more for women to have an equal playing field with men – the “more” being a hypersexualized portrayal of oneself.

In Part Two, I posited that in the current system, women sometimes fall prey to the systemic requirement of hypersexualization. Women self-objectify in order to gain the notice, following, and brand they want. I noted that although this is a common practice, it’s by no means healthy for women or society.

The systemic objectification and hypersexualization of women in sports and media in general is an ongoing problem. Cover the Athlete #covertheathlete is a movement urging sports reporters to apply the same standards covering females as they use for males. Watch this telling video that shows the answers reporters receive as male athletes are asked actual questions that were asked of female athletes.

We know what the system expects. Our response to those expectations determines our status within the system. Currently, men in general will continue to justify the system, i.e. “Hey man, sex sells. That’s the way things are.” Keeping the system in place allows men to remain in an advantageous position. Women who justify the system by acquiescing to it or by overtly defending it benefit in the short term, but suffer in the long term.

“The system is only the system if we, the consumers, continue to operate within its confines and march like zombies consuming what we’re being fed.”

And those who challenge the system are, at least initially, punished by it. We see this time and time again in obvious ways. Athletes who refuse to play the skin game fail to net sponsors of the same caliber as their more provocative contemporaries. Or, more subtly, they may simply fail to cultivate as many followers or fans. Refusing to play the game results in economic disparity, among other things.

Said another way, those athletes who want to build a brand can escalate their brand more swiftly by adding a booty shot or two and becoming the “sexy/hot/whatever” CrossFitter. Those who simply post their lifts, their educational spin, and practical information tend to be overlooked by social media. To put it bluntly, the fandom within the sport of CrossFit is not commensurate with the level of athleticism. You only need to look at the around-the-block line for an autograph with Christmas Abbott at the 2014 CrossFit games to know that.

Elisabeth Akinwale during the Soccer Chipper at the 2015 CrossFit Games. Akinwale is challenging the idea that women are the weaker sex.

Let’s look at a few real examples on Instagram.

Same basic resume, but Brooks has nearly five times as many followers. Go have a look at their respective IG accounts and tell me why that is.

We Are the Problem

But the question isn’t “Why?”. As I have stated repeatedly, the problem exists because our culture rewards beauty, attractiveness, and sexuality.

The real question is, “Why are we, the followers, doing this?”. Who are the 100,000 or so followers of Lauren Brooks, and why aren’t they following Natalie Newhart? Does our huge community of CrossFit athletes look to our CrossFit heroes to lead the way? If so, then the numbers above should be reversed.

Or are we so shallow that we’d rather thumb through an Instagram feed of hotness than one full of knowledge? If the answer is yes, imagine how sad that is. We, the followers, are the culture. We’re the ones who make up the system. Folks, we’re the problem. 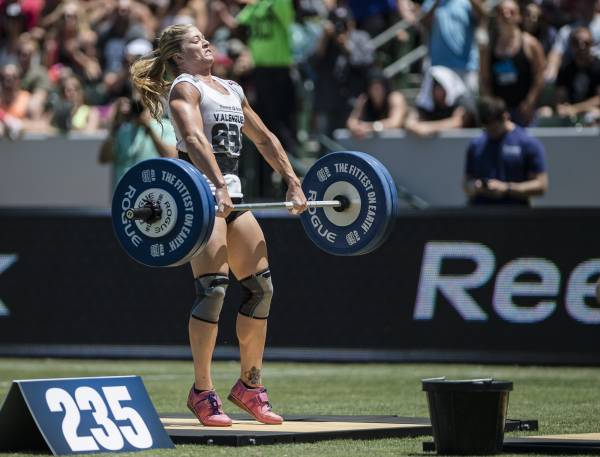 Change Starts With You

Any young female athlete who follows a Fitspo spokesmodel who happens to do CrossFit and chimes in on a fifteen-second IG post of double-unders with “You are such an inspiration!” is a lost soul who doesn’t understand what inspiration means. Any male who weighs in about how hot a female athlete is or a “Will you marry me?” comment is at best, a gawker, and at worst, a voyeur. The system is only the system if we, the consumers, continue to operate within its confines and march like zombies consuming what we’re being fed.

So change it. It starts with you. Here is how.

Make a decision to be vocal. Celebrate CrossFit athletes who present a strong and confident image. Speak up to sponsors who fail to recognize true athleticism and achievement as more important than looks.

Become part of a movement of change. In short, make CrossFit a leader in changing the system, not a part of it. And while you’re at it, call out HQ whenever needed.