The Shakedown on Salt: Is it Good or Bad for You?

Salt has been given a bad rap, but I often get cravings for it after a workout. I decided to take a deeper look into the research on salt to find out if it really is such a bad thing to be eating.

Salt has been given a pretty bad rap in the last few decades, but more recently we’re starting to hear about how it’s actually a vital part of our diets, especially for athletes. Personally, I like my food salted, and when I restrict salt, I seem to wind up feeling a whole lot worse for it – lightheaded and craving some pretty unconventional post workout foods.

A while back I went through a phase of being particularly restrictive with my salt intake. After sweating my way through daily workouts, I’d find myself craving salty foods (and we’re talking anchovies and olives, not junk foods). After consistently eating my way through jars of anchovies and olives on a nightly basis, I knew this was more than a passing craze, and there was something more going on here. As soon as I stopped restricting salt, the cravings went away.

But, I was still a little concerned. Even though it’s natural, salt is bad for you right? Was I being led astray by my taste buds or was my body actually craving salt for a reason? Was being back on the salt-train a one-way ticket to high blood pressure and heart disease? Well, turns out the opinions of the experts are pretty mixed.

The popular belief that salt intake should be restricted all started in 1972 when a study was conducted examining the effects of dietary salt on rats. The study appeared to show increased salt intake was positively correlated with hypertension. But, when we look a little closer at the details of the study, the rats were given doses of salt equivalent to a human consuming more than 500g or 4.5 cups daily. Compare this to the average intake in the United States of around 3.5g per day. I’m pretty sure even something as healthy as kale would produce some pretty bad health effects if you consumed seventy bunches a day!

Then in 1988 the INTERSALT study claimed to support this correlation. The study looked at various populations, taking their average salt intake and their average blood pressure. The study showed a few outliers with low salt intake and low average blood pressure, but generally a cluster of results showing no significant correlation between salt intake and blood pressure. It’s normal practice to remove outliers from a statistical analysis of results before searching for a correlation, however this wasn’t done in this study. An example of one of these outliers was the Yanomami Indians, who certainly did have lower rates of hypertension, as well as lower average salt intake. But they also led physically active lives, ate a diet low in saturated fat, and had virtually no obesity or alcohol consumption, and somehow salt still got the blame!

Which brings us to an important point: Blood pressure is affected by so many variables, from lifestyle factors such as stress levels, physical activity, and sex, to dietary factors such as caloric intake, potassium, and calcium. Salt or sodium is just one of these factors! 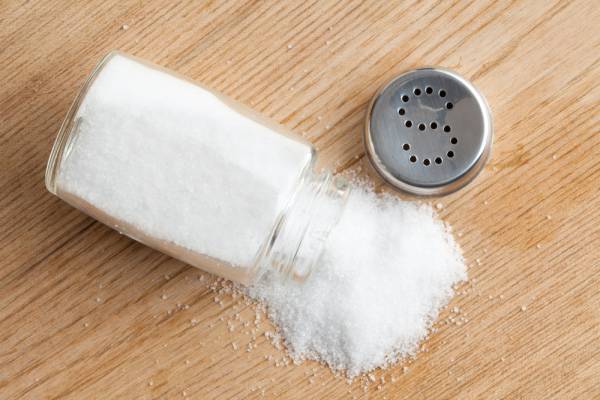 More recent studies have failed to show a correlation between salt intake and heart disease. The DASH (Dietary Approaches to Stop Hypertension) study shows that while a large reduction in salt intake may minimally lower blood pressure, there is no clear correlation between this reduced salt intake and a lowered risk of heart disease. Furthermore, a study from 2003 showed that American salt intake has barely changed in the past fifty years, so if we think about it logically, it doesn’t make much sense for salt to get the blame for the increasing rates of heart disease. In fact, more studies tend to support the idea that potassium and/or the ratio of potassium to sodium is actually more important than sodium levels alone when it comes to heart disease.

Even though it’s been demonized somewhat, salt actually plays a pretty vital role in our bodies, and there is mounting evidence it can be harmful to severely restrict it. So long as our kidneys function normally, our bodies are pretty good at regulating our fluid balance when we eat slightly more or less salt than required, but when we go beyond these levels it can be problematic, actually increasing the risk of cardiac-related death. Salt is particularly important for athletes to replace electrolytes lost during sweating, as well in the general population helping in the regulation of blood sugar and digestive processes.

So, while the evidence is far from conclusive, I’m happy to accept my anchovy and olive cravings as my body’s way of telling me not to take it easy on the salt shaker.