Accepted Post Workout Protein Dosages May Be Too Low

In new research that is bound to create antipathy in some quarters, health and exercise scientists from Scotland’s University for Sporting Excellence discovered there was no discernible difference in muscle growth because of protein consumption after a full body workout based on the size of the individual. However, there was a noticeable change when dosage was doubled from conventional norms. The indications are that whole body workouts change the physiological reaction of muscles to protein and that conventional approaches to post workout protein consumption may not be enough.

Both the American College of Sports Medicine and the British Nutrition Federation are of the consensus opinion that weightlifters don’t need more then 25g of protein after a workout to stimulate muscle growth. However, this study1 saw best results with consumption of 40g of protein. It also suggests that to determine the correct amount of protein , nutritionists have to consider the type of workout first (previous studies had primarily focused on lower limb workouts). It’s also worth noting that this study is based on young men, and that suggestions for females or older people will mean different recommendations completely.

Kevin Tipton, Professor of Sport, Health and Exercise Science in the Faculty of Health Sciences and Sport, said: “There is a widely-held assumption that large athletes need more protein, with nutrition recommendations often given in direct relation to body mass. In our study, participants completed a bout of whole-body resistance exercise, where earlier studies—on which protein recommendations are based—examined the response to leg-only exercise. This difference suggests the amount of muscle worked in a single session has a bigger impact on the amount of protein needed afterwards, than the amount of muscle in the body.”

For the study, young men were recruited and divided into 2 groups, one with a lean body of mass of less than 65kg and one with lean body mass greater than 70kg. Each subject took part in 2 trials, consuming protein after resistance training. In one trial, subjects consumed 20g of whey protein, and in the other they consumed 40g. Using metabolic tracers and muscle biopsies, researchers measured muscle growth rate.

The greater protein consumption in the younger male subjects in this study resulted in greater stimulation of myofibril protein synthesis (MPS). The researchers actually concluded that the lower dosage of protein, in line with existing recommendations, does not stimulate a maximal response of MPS in young, trained men. There’s a good case here for activating as much muscle during a workout as possible. More studies are going to be needed to get to some practical recommendations. However, more importantly, the size of the participant didn’t seem to have as much relevance to the efficacy of the dosage, which is contrary to accepted wisdom. 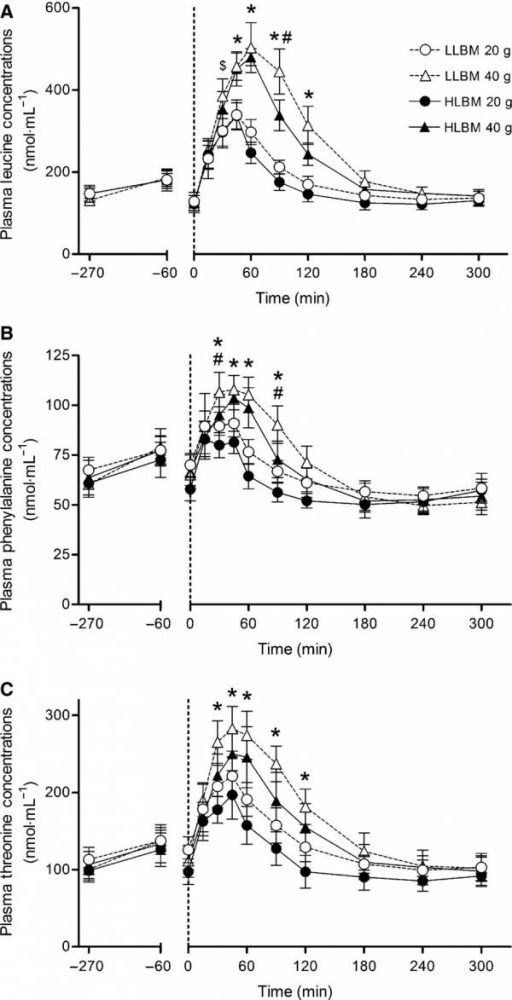 Plasma leucine (A), phenylalanine (B) and threonine (C) concentrations following ingestion of either 20 or 40 g of whey protein isolate in both the lower lean body mass (LLBM) and higher lean body mass (HLBM) groups. Data presented as means with 95% confidence intervals.

It’s worth remembering old school, pre-steroid bodybuilders were into compound movements and full-body workouts to build muscle and strength. Could be they had this all figured out a long time ago. Desiccated liver anyone?