Welcome to the Athlete Journal of Olympic weightlifter Holley Mangold. Holley is part of Team USA headed to London this summer. Follow her journey here as she trains for the 2012 Olympics!

Welcome to the Athlete Journal of Olympic weightlifter Holley Mangold. Holley is part of Team USA headed to London this summer. Follow her journey here as she trains for the 2012 Olympics! Holley’s journal will be posted every Friday.

I was born to a naturally athletic family with a touch of coaching to push me along where talent was lacking. My mother was a collegiate swimmer who came from a family of swimmers and coaches, and my father, who doesn’t have the athletic gene per se, has the gift of brute strength. I am the third child of four, and the first one to bright up a room – as a child I was the most outgoing of the children and loved to show off my newest dress.

Quite possibly, I was the least likely to be doing such a manly sport through high school. I was blessed, however, with my father’s heavier genes and despite loving twirly skirts, I also loved pushing and shoving as they do in football. All of my siblings swam on our summer league team, which my mom coached. My mom encouraged me to try anything I thought was interesting, so I did gymnastics, Tae Kwon Do, diving, speed skating, softball, basketball, wrestling, discus, shot-put, and football. All of the sports were great in their own right but football was the most fun to me.

My dad didn’t like the idea of me playing on a team where the coach could possibly be biased against me for being a girl, so he was my coach. I think, while it’s true that he didn’t want me to be picked on, he secretly liked being in charge and so coaching had to be his role. Either way, I loved being part of the Centerville Wee Elks where I played as a lineman. My team was the best and never once made me feel different for being a girl; I was one of the guys and loved it!

When I transitioned to high school, I started weight training with football more and realized I had a real gift in the heavy lifting. I started in powerlifting when I was a sophomore training in the barn outside of Larry Pacifico’s house. It was awesome to come into a sport where naturally I was able to manhandle the bar up. No sport before was I able to pick up so quickly and still get such a rush of adrenaline. I loved it.

Transitioning into college was going to be very different from high school because the chances of me, a 5’8” lineman, moving on to the college level is really unheard of, regardless of being male or female. I knew late in high school that my sport would have to change if I wanted to continue competing on the collegiate level. I was doing well throwing the shot and the discus in track, so I looked for places that had weightlifting and track at the same school. Since powerlifting is a sport where enhancement drugs are not regulated, I knew I couldn’t continue the sport and be a college athlete without taking something and making me ineligible. This brought me to Olympic lifting, as I could do both track at Ursaline College and lifting.

The first time I went to a practice, I was a fish out of water. It was easy for me to lift a bar, but the technique was completely foreign to me! I was eager to learn, but it was definitely a frustrating transition. It took me a while to have some sort of Olympic form. In college I trained with my coach, Dan Bell, in his house that was about an hour drive each way. It was then that we decided my training needed to be taken to the next level, so Dan shipped me off to Don McCaulley’s, in Savannah, GA. Don kicked me into shape by tough practices and a strict diet plan. I quickly got the hang of being an Olympic-style lifter and it became the sport I couldn’t get enough of. After my second year in college, I made the tough decision to put college, where I was majoring in Theology and minoring in sociology, on hold to train full time. 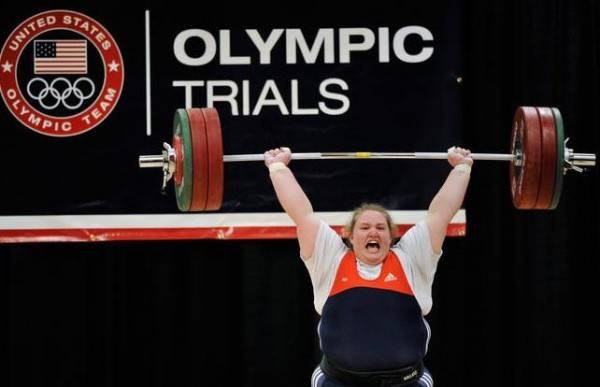 Eventually after doing well at some big meets, I got the attention of the Olympic Training Center (OTC). The OTC invited me to come train in Colorado. It was the coolest experience an athlete in training can ever experience for. The center and everyone there is focused on one goal: making the Olympics. The energy there is just amazing. I ended up tearing my knee while there and needed surgery. I went back to Ohio to weigh my options and ended up going with the doctors at Ohio State University. They did a wonderful job and I made a full recovery.

After that, I decided to stay in Columbus and train with my current coach, Mark Cannella. He quickly pushed me even further than when I was at the training center. At the time, I was living in his basement – house hopping through this experience has been a fun reality for me. Eventually I moved into a spare room in a house that my training partner, Drew Dillon, had available. During this time, he became my mentor through my Olympic process. He helped me get a catering job at City Barbeque and pushed me through practices where I wasn’t feeling like getting going, not to mention countless other things like being my “agent.”

All of the events in my life help contribute to my biggest accomplishment this spring. In March, I qualified for the 2012 Olympic team, which brings us closer to present day. My journey surrounding that day and the days leading up the Olympics will be blogged here. Stay tuned!