You don’t have to be a paleo eater to know that coconut products are good for you. And that’s a good thing, because it means you can eat yummy products like Nikki’s Coconut Butter.

You don’t have to be a paleo eater to know thatcoconut products are good for you. Coconut is high in fiber and in saturated fat, which is the good fat we’re all after. Specifically, coconut is full of medium-chain triglycerides, or MCTs. MCTs have been linked to increased fat oxidation and can be absorbed rapidly in the body without getting your blood sugar all out of whack like carbs do. Coconut is also full of lauric acid, which has been shown to have antiviral, antibacterial, and antifungal qualities. So basically, there you have a whole bunch of science to justify eating some seriously yummy foods. And by yummy foods, I most certainly am including Nikki’s Coconut Butter.

These are, however, calorie-dense treats. Two tablespoons of the Honey Pecan Pie will net you 210 calories, 20g of fat, 7g of carbs, and 2g of protein. The label says there are twelve two-tablespoon servings per 12oz jar, but I used much smaller amounts for my personal servings and found that to be plenty satisfying. While you may have urges to polish off these jars in one sitting, they should last you a while. I found a small spoonful of one of these in the afternoon was immensely satisfying.

And I say you’ll have the urge to polish these off because Nikki’s Coconut Butters are indeed ridiculously tasty. Of the three flavors I tried, I preferred the Macadamia Nut Cookie and Honey Pecan Pie. They both had a nice nutty and sweet flavor, and the unimposing richness of the coconut behind it all. The Vanilla Cake Batter was a bit plain in comparison. That being said, the vanilla flavor probably also mixes the best with smoothies and other things. 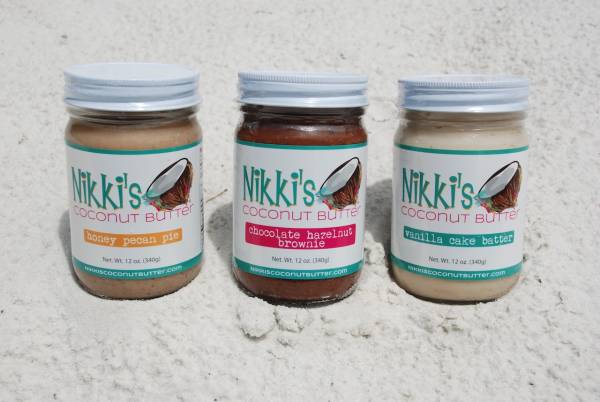 I tried the Vanilla Cake Batter flavor in my coffee as was suggested by the label on the jar. I couldn’t really taste it and it also left some sediment in the bottom of my mug, which was a bit shocking as I was drinking my coffee in a hurry in the dark trying to not wake my husband while getting myself out the door. I also don’t like to have sugar first thing in the morning, and these butters do contain honey. So I won’t personally be making a habit of putting these coconut butters in my morning coffee.

The butters will also blend best when they are not cold. Nikki’s suggests right on the jar that if you briefly heat the coconut butter it will result in a smoother texture. Given that the butters come in a glass jar, as long as you remove the metal lid, warming them up is easy enough to do. You should do the same if your butter ends up separating after sitting for a bit. Personally, I was so excited when I received my jars in the mail that I wanted to bust right into them, only they were cold from sitting in my mailbox all day and I had to kind of chip away at the coconut butter. It was definitely easier to scoop once it hit room temperature and I believe it also had a fuller flavor than it did when cold.

At $12.99 per 12oz jar, these coconut butters are quite fairly priced. A 16oz jar of plain Artisana coconut butter runs about $13.00 on Amazon and doesn’t have the flavorful extras that these Nikki’s blends do. If you only buy a jar or two, then the shipping is a little expensive, but there is a considerable discount once you start ordering a number of jars. Personally I think a jar of Nikki’s Coconut Butter would be a great gift in a stocking, for coworkers, or for friends from the gym, so it certainly couldn’t hurt to stock up on this yummy stuff.

Nikki’s Coconut Butter is available for $12.99 per 12oz jar atNikkisCoconutButter.com.