Nitric oxide is growing in popularity, and this product makes it easy to reap the benefits during your workouts. 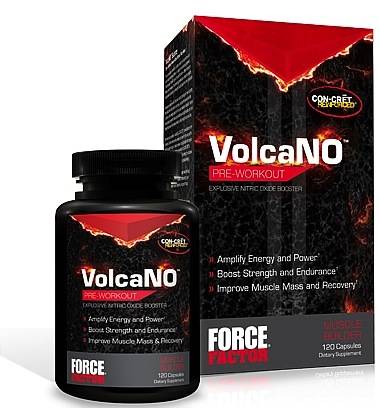 The popularity of supplements that boost nitric oxide (no, not the stuff your dentist gasses you with) is growing all the time. Nitric oxide (NO), is an interesting molecule that has many effects on the body, some which of can increase athletic performance. I recently got to try ForceFactor’s NO offering called VolcaNO.

For those not familiar with NO, its primary benefit is the relaxation of the smooth muscle that determines how dilated your arteries are. If the arteries are too constricted, blood flow can be reduced, and thus, athletic performance is also decreased. Conversely, by enhancing the body’s ability to dilate the blood vessels, more nutrients can be delivered to your muscles and performance increases as a result.

Each pill is a cool bright red color and easy to swallow. Each one contains the Nitric Oxide Muscle Matrix, which involves an NO blend and a creatine blend.

The primary means of increasing NO in this supplement is with L-citrulline. Citrulline is an amino acid that is a part of the metabolic process by which NO is generated in the body. NO itself is very short-lived in the body, and thus should be taken supplementally via a precursor like citrulline instead. Because the citrulline content is a part of a proprietary blend called the Vein-Annihilating Blend, there’s no way to be sure how much is included.

The other proprietary blend included is the Creatine Strength Complex for improving your workout. It includes Concret, a brand of creatine HCL, and the amino acids L-methionine and L-glycine. 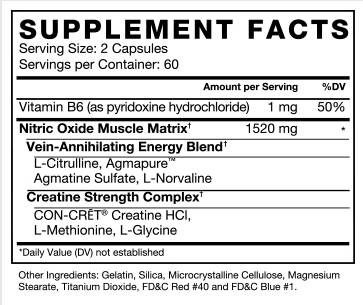 I took VolcaNO prior to both my strength workouts, which is what it’s marketed for, and also before runs. Much like with most NO supplements, I felt a slightly stronger pump during my workout, but actually noticed more of an acute change during my runs because of the added blood flow. Long-term use of VolcaNO would probably be a benefit for each type of workout, as improved blood flow helps with both energy and recovery.

My only gripe with the product is the price. As a larger athlete, I take the larger recommended dosage of eight caps per day, which amounts to just over a two-week supply per bottle. That would price this supplement higher than other products in a similar category that are safe and known to work. As a result, it makes me a little shaky on purchase.

As it stands, VolcaNO is a great product that does what it’s supposed to, but with a price tag most will balk at. If the latter isn’t a concern for you, give it a shot because it will work.

VolcaNO is available for $69.99 at ForceFactor.com.