5 CrossFit Exercises That Make You A Better Swimmer

As a CrossFitter and competitive swimmer, I have seen directly how CrossFit made me a better athlete and upped my swimming game. Here are my five favorite exercise to improve your swimming.

While CrossFit is traditionally used for general physical preparedness, its use in sport specific training is becoming more and more popular. Swimming is no exception. For the last year I have been using CrossFit to boost my swimming training with astounding results. I have also helped other swimmers significantly improve on their swimming performances using what I have learned from my CrossFit experience. But my swimmers and I aren’t isolated cases. Several teams across the United States have adopted CrossFit as their main strength and conditioning complement to swimming, including a handful of notable swimmers.

Although we typically move our arms and legs while we swim, the key in swimming is a strong core to connect upper and lower body to help us move through the water more efficiently. One can have the strongest upper and lower body, but without a strong core we would swim like a “flimsy noodle.” It wasn’t until CrossFit that I realized how weak my core was, and that of other swimmers also. Strengthening the core was a priority.

It seemed only logical that CrossFit could be a perfect way to achieve this stronger core. CrossFit uses functional movements that, among many things, are compound, use the universal recruitment pattern, and are core to extremity. It would be safe to assume these movements might be the most indicated to prevent the “flimsy noodle syndrome” (i.e. lack of midline stabilization) and allow swimmers to be more effective. This is in contrast to isolated muscle exercises that have been traditionally used (after all we don’t swim with isolated muscles, so universal recruitment seems pretty sound and logical).

The five movements I picked for this article are, in my experience, the ones I felt helped me the most in translating speed, power, and explosion off the blocks and in the water. They are: 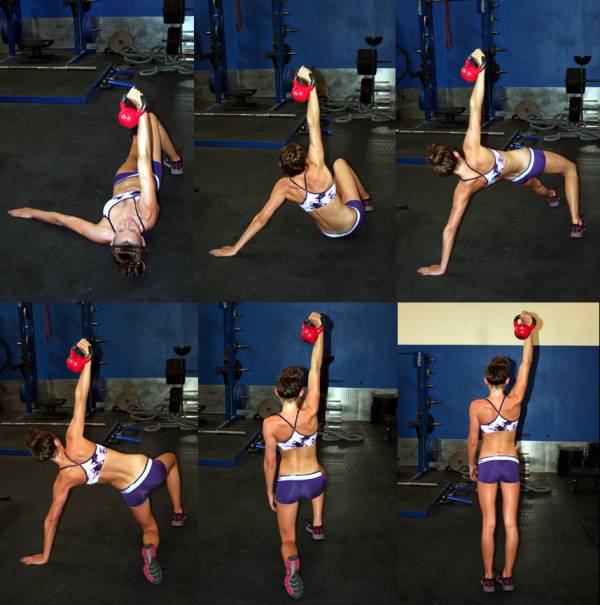 While I despise performing Turkish get ups, you will notice I chose to put them on top of the list. I equate Turkish get ups to medicine: they don’t “taste” very good, but they do a lot of good for the body. This is especially true for swimmers. Swimmers are usually plagued with shoulder issues. Swimming involves constant shoulder rotation, and while most times all the musculature will develop appropriately to support the level of activity, the overuse and abuse of the shoulder eventually becomes evident. I would challenge anyone to find a swimmer that has not dealt with a shoulder injury in their career; they would be few and far between.

So, why the Turkish get up? The Turkish get up is a highly functional movement that requires all the muscles of the body working together in order to accomplish it. It is the mechanically correct method of coming from a position lying on the floor, to standing, while supporting a weight locked out overhead. Additionally performing a Turkish get up with a kettlebell involves a great deal of shoulder flexibility and stability. Performing these with lightweight kettlebells will prove to be a “large dose of medicine” for any swimmers’ shoulders.

GHD Sit Up and Hip/Back Extension 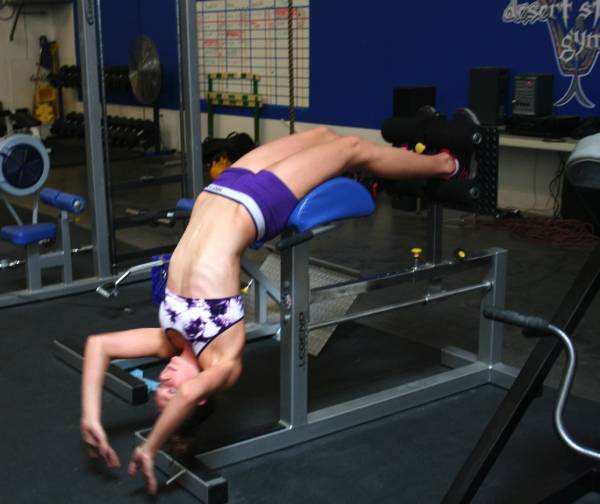 I chose to lump these into the same category as one movement even though they really are two separate movements. The GHD sit up and hip/back extension are in my opinion some of the best movements to translate into swimming. The GHD sit up takes the trunk from hyperextension to full flexion using isometric contraction of the abdomen. This sit up is a powerful tool for swimming, because in addition to recruiting the abs and trunk flexors, there is a primary recruitment of the hip flexors. The hip flexors are vital in ALL swimming strokes. Finally the GHD exercises are static contraction/stabilization exercises, which are likely the best way of achieving midline stabilization. Notice my “abolish flimsy noodle syndrome” campaign trend?

Dan McCarthy, USA Swimming National Team High Performance director, considers the hang power clean to be the “missing piece to many swimmers’ strength and conditioning program.”1 The hang power clean is compound, as it recruits multiple muscle groups to work synergistically. It moves the barbell from the high hang position to shoulder level in a dynamic and explosive fashion. The hang power clean is, together with the kipping pull up, likely the exercise that most resembles a full swimming stroke.

Although the thruster is the combination of a front squat with a push press, the first movement is to get the barbell to shoulder level, and that requires a clean (or a squat clean in most cases). The Curtis P begins with a clean. Both the thruster and the Curtis P end with an overhead press. So, the difference lies in between. While the thruster comprises a front squat, the Curtis P uses a lunge on each leg while holding the bar in front rack.

The benefit of both the thruster and the Curtis P in swimming is largely the same. Both are great at translating explosiveness of the movement into either explosion off the starting blocks or pushing off the walls during turns. But the benefit isn’t restricted to the minor details. Both provide great leg power to breaststroke, a primarily leg-driven stroke.

As mentioned previously, the kipping pull up is likely one of the movements that most resembles a full swimming stroke. In contrast to strict, or deadhang, pull-ups that are mostly arm strength based, the kipping pull up uses a successive firing of muscle groups in order to move the body from fully extended below the bar to chin over the bar. Becoming proficient at kipping pull ups requires not only upper body strength, but careful rhythmic coordination of all muscles recruited, including midline and lower body. It is not by accident that one of the kipping styles is called the “butterfly.” The butterfly kip resembles the swimming stroke known as the butterfly.

Efficient kipping provides great means of core control, important in midline stabilization, but it is also a great means to emphasize not only the downward kick but also the upward kick (particularly in the butterfly kip). The upward kick is said to have been crucial for the great Misty Hyman to conquer the Olympic Gold medal in the 200m butterfly at the 2000 Olympics in Sydney. Although outside the CrossFit world the kipping pull-up is “affectionately” referred to as the “cheating” pull-up, hopefully the swimming world will realize the great benefits this movement could provide to the sport.

These are by no means the only movements in CrossFit that benefit swimmers. On the contrary, the vast majority of movements have a direct correlation to an aspect of swimming. These are the ones I most emphatically support based on my personal experience as a swimmer and a coach. Needless to say, these only become effective when done technically/mechanically correctly, as part of a carefully and intelligently drafted training program, ideally under supervision of a trained CrossFit coach.