5 Reasons You Should Box Squat

So, what makes the box squat useful? You can improve your back squat without back squatting, that’s one reason.

“Why are we squatting to a box? Nobody cares how good my 1RM box squat is!”

That was a legitimate complaint fielded from a client who has been at my gym for seven years.

“Why are we squatting to a box? Nobody cares how good my 1RM box squat is!”

That was a legitimate complaint fielded from a client who has been at my gym for seven years.

“I just want to back squat, man,” he persisted.

I had a small laugh to myself for a moment, but then realized it was worth addressing, as I frequently use a box squat with my clients for various reasons and maybe haven’t made it clear enough to them why.

To my client, and to the countless clients out there who just want to back squat, here’s the thing: Box squatting will ultimately serve to improve your back squat.

So, what makes the box squat useful?

1. The Box Squat Is Harder

The box squat naturally causes your momentum to slow to a halt as you reach the box.

In this sense, it’s sort of just more analogous to life in that it forces you to be more efficient and to find ways to get something done without that useful momentum we like too much.

The box squat helps improve squat mechanics as it forces you to use more of your muscle fibers in your posterior chain. Furthermore, it allows you to slow the movement down, which gives you an opportunity to truly focus on your mechanics. Stopping on the box provides a chance to double check your mechanics and positioning—Is my chest proud? Are my knees pointed out? Is my shin angle correct? Is my spine in a good position?—before driving out of the hole.

This is why I definitely resort to the box squat for new clients: It’s a way easier way to help them hone their squat mechanics from day 1, which goes a long way in preventing bad habits from forming.

4. Box Squats Save Your Knees

For people with a history of knee pain, or injuries especially, the box squat is a great way to sit back a little further in the squat to reduce loading your quads too much, which can place strain on your knees if your joints aren’t yet as bulletproof as they should be. 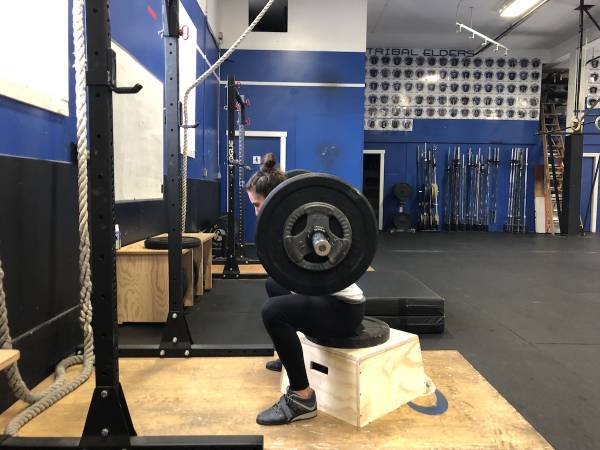 Similarly, new lifters (and sometimes even experienced ones) are inconsistent with their depth on a squat, especially as the barbell gets heavier.

The box doesn’t lie. It forces you to hit a consistent depth on every single squat, which helps you develop a more consistent squat once you eliminate the box and return to the more glamorous back squat.

As a final tip, if you have reached a point where your back squat has hit a plateau and you can’t seem to improve no matter how much you squat, try mixing it up and switch to a box squat for 6 weeks. You might be surprised how much benefit it will provide.