Hate cardio? Good news – if your goal is fat loss, there is a better way to spend your time at the gym.

Cardio isn’t fun. Whoever says they enjoy plugging away on the treadmill for thirty minutes to an hour is lying (note: enjoying activities you partake in while doing cardio, i.e. listening to podcasts and reading Breaking Muscle, doesn’t apply here).

Many of you see cardio as a necessary evil required to meet your goals, but what if you could do away with the activity entirely and still get to your end game?

Step away from the treadmill – there is a better way to spend your time at the gym.

In fact, you may be doing more harm than good. A 2011 meta-analysis published in the Journal of Strength and Conditioning Research found that when the research was analyzed according to type of endurance exercise and body part, running lead to an interference effect on lower body strength and hypertrophy. The meta-analysis did suggest low-impact aerobic exercise, such as cycling, wouldn’t have a negative impact on hypertrophy. So, if you enjoy the odd bike ride or dog walk, have at it.

But why not combine full body modalities of cardio and weights as an effective way of reducing interference with your strength-training goals while still getting the benefits of cardio, notably the metabolic boost, EPOC (excess post-exercise oxygen consumption).

Enter complexes, specifically Cinco Sets, that can be incorporated within your training program and accomplish the best of both worlds. Want to oxidize more fat? Then you need to inhale more oxygen. Cinco Sets aren’t easy, but they help you accomplish just that in short order.

Cinco Sets Are a Time Saver, Too

Realistically, most of you don’t have the time to emulate the high-volume workouts of Arnold and his cronies. Nor can you regularly get in an hour of strength training in the morning and sprints on the track in the afternoon. You have a long commute, dogs to feed, and reality TV to binge watch. Whether you could cut back on time spent scrolling through your Facebook feed is a moot point.

“[W]hy not combine full body modalities of cardio and weights as an effective way of reducing interference with your strength-training goals[?]”

A five-movement Cinco Set allows for a ton of volume, is completed in a short window of time, and can be modified for whatever training goal you seek as I’ll explain below.

The K.I.S.S. Method to Cinco Sets

No pie charts or arithmetic necessary. Simply line up five exercises in a row that target the muscle groups you’re training that day and crush them in succession. Pair antagonist (i.e. biceps and triceps) exercises as non-competing sets to increase blood flow to the opposing muscle group. This prevents fatigue from setting in as quickly as when you work the same muscle one set after another.

The rep range you opt for is entirely up to you (again, depending on your goals). Here are your options:

No matter the rep range chosen, rest after completing the Cinco Set until you’ve recovered enough to hammer it out again. Repeat for 3-5 total rounds. 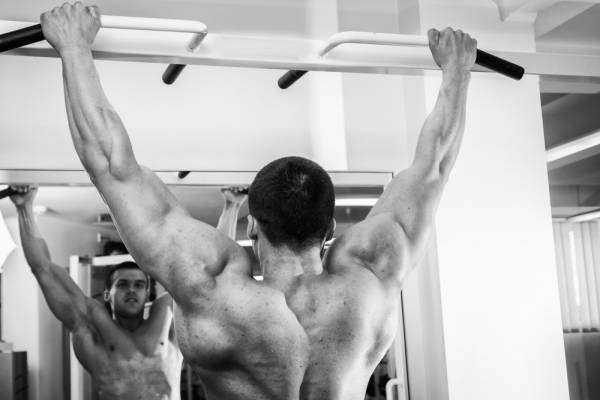 Knowing your physical goals will help you decide on weights and rep ranges for the workout.

When to use Cinco Sets:

There’s something to be said for a five-exercise Cinco Set circuit. Most people stop at two (supersets) or three (tri-sets), but you’ll truly meet the devil maker at five sets. But Cinco Sets are not just glorified supersets taken to extremes. Here are some well-established training methodologies can apply to Cinco Sets – density training, barbell complexes, and AMRAPs.

If you’ve never heard of escalating density training, you’ve been missing out. The basic principle is that you perform as many reps as you can in a given time frame, instead of focusing on a set amount of reps per set. Simply going for 3 sets of 10 reps on a given exercise can be limiting. If you think 10 is your limit, you won’t push for 12. But if you’ve got 15 seconds on the clock still to get through of a 45 second round, you’ll find a way to squeeze out a few more reps (in a safe and controlled fashion of course).

Increasing training density helps boost hypertrophy and fat loss, but also strength endurance, which has a lot of benefits for athletes. The method of density training I’ve used with Cinco Sets was stolen directly from John Romaniello (who modified Charles Staley’s theories).

“If you’re in a rut with your training, add in a Cinco Set (or two) and kiss your comfort zone goodbye.”

Here’s how to implement a density training Cinco Set using a Smith machine (no need to take up five machines in a busy gym). Simply perform each exercise for thirty seconds, and then add weight and try to increase your reps on the second circuit.

Again, depending on which goal and rep range you’re focused on, the weights chosen should reflect that choice. If you’re opting primarily for strength, you’ll perform fewer reps during the allotted work duration (with rest periods in between) than if you’re focus is hypertrophy, for example.

Alternatively, here’s another option requiring simply a pair of dumbbells and a bench.

Again, depending on which goal and rep range you’re focused on, the weights chosen should reflect that choice.

Again, nothing revolutionary here, but the tried and tested work, so why get funky with it?

A barbell complex is nothing more than a circuit of compound movements using a single barbell. You use the same weight throughout the circuit and never take your hands off of the bar.

In Cinco Set fashion, you’ll be doing five exercises in sequence without putting the bar down. For a full-body routine to try: floor deadlifts, overhead presses, barbell rows, stiff-legged deadlifts, and floor barbell bench presses with the same weight. The weight chosen will, again, depend on which performance goal you’re focused on.

CrossFit does a lot of things right, and AMRAP (as many rounds as possible) sets are one of their redeeming qualities – they’re hard and demolish your comfort zone in one badass way. But often AMRAP sets involving heavy lifts lead to poor form late in the circuit.

To curtail that, instead of completing a circuit rotating between two or three exercises, i.e. 5 deadlifts, 10 kipping pull ups, and 20 kettlebell swings, rotate five exercises involving different muscle groups on each exercise. You’ll be less likely to compromise form if you’re engaging a relatively “fresh” muscle group on each set of the circuit.

This could look simply like so: 5 deadlifts, 10 lunges, 15 kettlebell swings, 20 goblet squats, and 25 hanging leg lifts. Rinse and repeat for 3-5 rounds or until a specific time limit is reached.

Get Comfortable Being Uncomfortable

A five-set circuit is hardly revolutionary, but they are extremely challenging using any of the training methods mentioned above. If you’re in a rut with your training, add in a Cinco Set (or two) and kiss your comfort zone goodbye.