The name Paul Anderson is still one of mythical proportions in the barbell world regardless of whether you are talking about Olympic, powerlifting, or strongman practitioners.

Anderson’s lifts were way ahead of their time, while his charismatic personality served to further his mystique even decades after his 1956 retirement. With the passage of time and the lack of this mystique among the younger lifting writers, we now have the phenomena where many of the claimed feats of Anderson are being questioned.

One of these feats that had become a canon over the years was his purported 1,200-pound squat. This claim has been repeated many times by his admirers, although it has never been authenticated by anyone who may have witnessed it all those years ago. And, as is known, it never was done in public.

The closest we can come is a lift Anderson performed in April 1957 at the Mapes Casino in Reno, Nevada. He performed there for only two weeks, just a few months after his Olympic gold medal performance in Melbourne, Australia. He probably only had a short window to put on this routine because I’m sure the casino would have realized it would grow stale after a while. So, we’re looking at only a narrow window of opportunity for anyone, especially knowledgeable weight people, to have witnessed even this performance.

At the Mapes Casino, Anderson reportedly performed several squats each day with 1,160 pounds on a specially made barbell device. It consisted of a bar with two boxes that looked like safes, but had glass walls. The hook in the act was that the ends of the device were filled with 15,000 silver dollars, a site familiar to casino habitués and residents of Western silver states going back to the days of William Jennings Bryan and his 1896 campaign for the free coinage of silver. (People out west like real money, not paper money. Casino operators like them because they fit in the slot machines nicely.) Even better all those dollars would be handed to anyone who could duplicate Anderson’s stage feat. But none ever even tried.

Did He Squat It Every Day?

But the big question remains, did he really make this 1,160-pound squat every day? Then, as now, a certain amount of skepticism was understandable. After all, this weight was nearly double what anyone else even thought of squatting, and here he was doing it several times a day.

Also remember this was several years before steroids were available. Hell, even if they were available, the same feat still has not been done by modern power-men even with all their pills, suits, wraps, and whatnot. Thus, the lifting world accepted Anderson’s claims for many years, but now a more detached generation is starting to question the veracity of this lift. Let’s see what we have and then make up our own minds.

Could He Have Done It?

Let’s start with the U.S. Peace dollar, the kind available in 1957. It weighed 26.73 grams, was 38.1 millimeters in diameter, and measured 2.4 millimeters thick. 15,000 silver dollars would weigh 884 pounds, give or take their fine tolerances. (Trust me on the calculations).

Now, how many really were in the safes? The most efficient way to fill these boxes at the ends of the barbell was by stacking the coins one on top of the other, cylinder-style, with a number of such cylinders packed side-by-side as the box was filled. Stacked this way a thirteen-inch cube box could contain 7,500 silver dollars easily.

The boxes on the ends of Anderson’s barbell-like device appear to have been slightly larger than that, maybe by several inches. I assume the safes were cubic in shape, or nearly so. It is hard to tell, but that seems that would have been the most likely case. Therefore, they could have contained $15Gs. (“Gs” didn’t become “K” until decades later).

The exact number is still a bit problematic, though. This is because the dollars were not packed in nice columns. They were just thrown in to settle at random. This probably means there was a bit more space between the coins, but I doubt if there was enough space to throw into doubt the $15,000 figure.

By the same token, there would not have been $25,000 worth of coins there. Some stories have it that Anderson was offering $25,000 to anybody who could duplicate his feat. If they did, the weight would’ve had to have been greater than the weight of the barbell device. 25,000 silver dollars would weigh 1,473 pounds. Even Anderson’s most ardent supporters could not claim a squat with such a poundage. 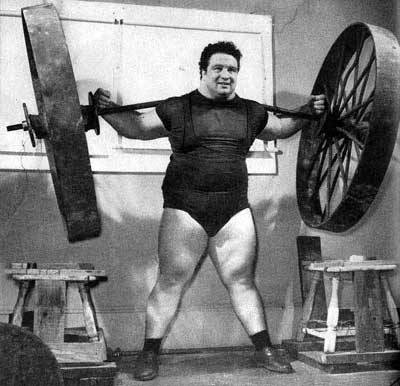 Was It Even Mathematically Possible?

So now we must determine that 15,000 silver dollars could have been squatted by Anderson. We also must add in the weight of the barbell device to determine how much he did in fact squat in total. If the 884 pounds of coins is correct and if the 1,160-pound squat is correct, then this barbell device must have weighed weigh 276 pounds.

We still have another problem, though. A few paragraphs back I said that the ends could hold the $7,500 apiece. The operative word is could. If Anderson had wanted to make his job a little bit easier, he might have found a way to put fewer coins in the ends. That could have been done if there was a certain amount of empty space all nicely surrounded by coins and totally invisible to the audience. Could this have been what happened?

Well, it is possible, but that in turn creates more problems. Remember that there was indeed a $15,000 reward to anybody who could squat these weights. There was always the risk that some monster would rise up out of the audience and claim that fifteen grand. The more the plates were hollowed out, the greater the chance of someone being able to lift it.

Fortunately for Paul, few people in 1957 could squat more than 600 pounds. You can count them on the fingers of your hand and Anderson would probably have known most of them on-sight. With the shortness of his performance gig and the difficulties of timely travel in those days, he could probably have counted on none of those lifters showing up.

Another thing Anderson could have possibly counted on was the warm-up situation. We do not know if there was an extra barbell backstage where challengers could have warmed up before tackling the monster. Any experienced lifter who could squat really big weight would not have been so foolish as to try and attempt it cold. Anybody else could confidently have been predicted to fail the weight, whether they warmed up or not.

With that in mind, there was still a bit of a risk on Anderson’s part that with hollowing out the ends some knowledgeable barbell man might have tried unracking the barbell to test its weight. If the weight was significantly lighter than the 1,160 pounds, a strong man would have been able to tell if any monkey business had been attempted. They wouldn’t have won the fifteen grand, but they still could have said that the advertised weight was bogus. Neither Anderson nor the casino would have wanted that to happen.

How Low Did He Go?

All that said, another question remains, as it does with every big squat made in history – did he go low enough? Unfortunately, there does not seem to be any picture of Anderson in the rock-bottom position with this device or even known eyewitnesses. Anyone is capable of a large squat if they do not go as low as the rules now demand. And given that Paul had huge thighs that made a legal squat difficult, some doubt must remain.

Where Does All This Leave Us?

And that is where we must leave this discussion. Few people are around today who witnessed the event and can critique it knowledgeably. But maybe that’s for the best. Until human males squat 1,200 pounds on a frequent basis, weightlifting enthusiasts can discuss Anderson’s strength feats like they have been for a half-century already.

In my opinion, whether we know if Anderson’s squats were legit or not, they still required a very strong man. Just holding that much weight on the shoulders and not even moving takes a lot of strength. Rather than worry about the bona fides of his claims, I prefer to remember a man who brought weightlifting to new heights and inspired the birth of powerlifting. He was a pioneer in both sports and inspired many to take to the iron. I’d like to challenge anybody to refute that claim