The heavy snow has made it harder to maintain my momentum during the current phase, but I finished out the final two weeks in spite of all the snow shoveling.

Monday (two weeks ago) was the beginning of the third week of this phase. Although the workouts for this phase are going okay, I’m losing my momentum. There are periods where I need to slow down my expectations so I can get the rhythm of work back in line with my goals.

I’m going to keep cleans as the first exercise of the week. On Monday my legs felt heavy, so I started tentatively and let my body determine the direction for the work load. I started with speed cleans and spent a lot of time with the bar and 40kg. Things were starting to flow, so I jumped to 70kg and did six comfortable reps. I took 80kg for six reps, then made a daring jump to 90kg for two sets of six reps. Power cleans from the hang were next. I repeated the two sets with 90kg, then moved to 100kg and did two sets of six with that weight. The final exercise was power cleans from the floor. I repeated the rep and set sequence with 100kg as I did with the second exercise.

My legs were starting to rebel, so the next jump came with limitations. 110kg went well, but my legs were on fire. Four reps in each set was all I could muster.

This was a short training week, so I did back squats on Tuesday, even though I hit the legs hard during the last two sessions. The weights felt heavy but were moving well during warm ups. I did 70kg, 100kg, and 120kg for six reps. The final sets were done with 140kg. They were hard, but steady. The third set was the easiest of the four, and the fourth set was the hardest. I decided to do speed squats with 100kg and do two sets of ten reps. The legs were done, done, done. I was hoping my knee wouldn’t explode.

The next workout day was Friday and we did our fitness session. It was short and sweet, just the way I like it.

Friday night and Saturday morning a snowstorm hit, so I spent the entire weekend shoveling snow.

Sunday was front squats, but I wasn’t too enthusiastic about it. All that shoveling drained me. I tried the workout anyway and failed miserably. 100kg felt staggeringly heavy and my attempt at 125kg was feeble at best. I switched to power cleans and took 100kg for four. Then I did 112kg for two sets of three. That was enough for me.

I woke up Monday morning feeling so much better than the day before, so I decided to take on yesterday’s workout. The weights felt much better – amazing what 24 hours will do. The 125kg were hard but I still did the 5, 3, 1 stop squat for three sets and a total of 27 reps. I couldn’t even do one the day before. Finished with 90kg speed squats for six reps. I left the gym very satisfied. 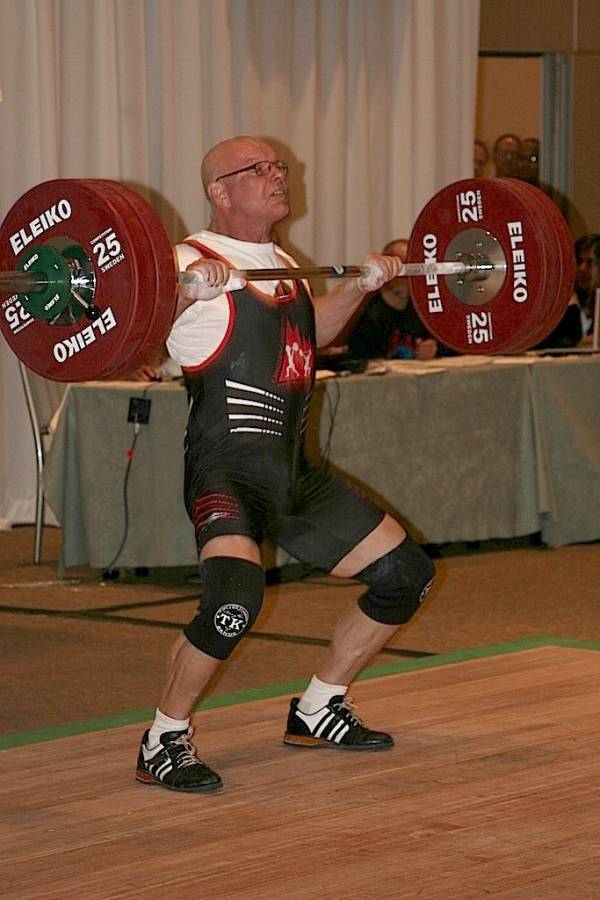 Tuesday was upper body and my legs were thanking me for the time off, even though I had to spend the afternoon dealing with that white stuff that falls from the sky again. The workout was nothing special, and I repeated the same weights as the last upper body day. I used 135lb for behind neck press, 155lb for inclines, 160lb for narrow pull downs, and 35lb for dumbbell curls.

On Thursday the legs were still very tired. Since this was a rest week, I worked on some light overhead work. I did drop snatch/full snatch combo work, doing three alternating reps of each exercise and working up to 60kg for four sets.

Long circuit and rest week’s circuit couldn’t come at a better time. I’m not sure if I will be up to the task when I have to start really working on these days. I guess I will find out in a couple of weeks.

Oh guess what, you’re right – more shoveling. Time to invest in a snow blower, although it wouldn’t matter because there’s no place to put the stuff.