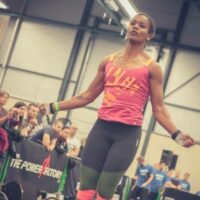 Carla Nunes da Costa was born in 1976 in Luanda, Angola. Her life was spent in Angola, the Netherlands, and South Africa. As a result she likes to call herself a hybrid.

She holds an LLB in International Criminal Law and for years had the illusion that she'd change the world and its wars. As of late, she has come to the realization that maybe the world she was trying to change was her own, full of war and inner conflict.

Carla was a competitive sprint canoeist and raced all over the world for both the South African and Dutch National Teams. In 2013 she won the Africa Regionals and earned herself a sport at the CrossFit Games.

While working inside the office she felt that her spirit would surely die and spent more and more time on the other side of her: sports. As a result she kept on educating herself with different courses including, Kettlebells, OPT's Assessment and Programming, ART, and CrossFit's Level 1, Coach's Prep, CrossFit Kids and many others. What was a part-time hobby, slowly but surely took over and she now resides in Cape Town, South Africa with Bert and Britney her two English Bulldogs and works as a trainer at Cape CrossFit in Gardens.

Carla's goal is still to create her own gym, a place not just for the exercising on the body but that of the spirit.