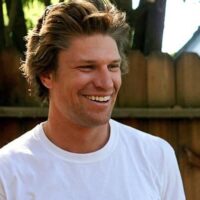 The two things Casey Weaver enjoyed most from an early age were good food and hard-nosed sport. He grew up in Long Beach, California, playing baseball, surfing, and spending time in the kitchen with his mom and grandma. Despite being a food-wise and active kid, it wasn’t until after his freshman year at UCLA that he really began to think about making choices that would keep him healthy. And it took a catalyst. After having let his unhealthy habits get the best of him, Casey's father, who was once an elite athlete himself, passed away unexpectedly. It made Casey think. Later that year he found the sport of triathlon, which propelled him head first into the realm of endurance sports.

Casey's passion for endurance sports and nutrition led him into business with a good friend who had developed a unique sports drink called Prolong Energy. Before too long, the small company was acquired, and from 2010 to 2011 they developed and internationally launched a complete performance nutrition line, all around the cornerstone product, Prolong.

These days Casey competes less, but has more balance in his approach to being active. He still spends plenty of time on his bikes, but is back to surfing, spear fishing, running, and cooking. Casey has also started supplementing his workouts with CrossFit. His undertakings, like his life, are driven by passion.