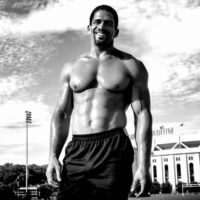 One part nerd and one part jock, Javier's journey through the health and fitness industry has consisted of one obsession after another - from bodybuilding, Olympic weightlifting, and football combine training to alternative medicine, stretching therapy, and meditation. The broad scope of his interests led him to realize there is no single best method and that an open mind is the most important characteristic for ensuring his continued growth as a professional.

Javier has been a competitive athlete in football, wrestling, rugby, and Olympic weightlifting and is currently immersed in the world of Brazilian jiu jitsu and mixed martial arts. Of all the experiences gained from competitive athletics, having to rehab from various injuries has proved to be invaluable for his understanding of the human body and its capacity to heal.

Javier has been working as a personal trainer and strength coach in New York City since 2009. He found his calling as a muscle-building specialist, helping guys (and a few gals, too) to pack on lean mass while simultaneously maintaining an emphasis on mobility and pain-free movement. His approach is a combination of the old-school methods developed by the innovators of the iron game combined with modern-day nutrition and regeneration science.

Stay updated with his latest articles and videos at Day 1 Performance and receive his favorite plateau-breaking routines by becoming a subscriber.