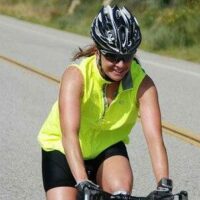 Julie Warren is a small town girl who dares to dream big. Coming from a Midwest farming community, she declared at age ten to her parents that she would earn a college basketball scholarship. Despite the odds, she made good on this promise in 2000, when she walked onto Bradley University’s women’s basketball team (NCAA Div I), and ultimately earned a full-ride scholarship.

Motivated by the events of 9/11/01 and her desire to be a part of something larger than herself, she commissioned as a US Air Force officer and is a decorated combat veteran. During an assignment in Colorado Springs, she heard about a “crazy” race called the Pikes Peak Ascent where people trail run 13.32 miles to the 14,115ft summit of Pikes Peak. She immediately added the race to her mental bucket list.

Almost as soon as she started trail running, she fell in love with it. She began competing in trail races all over the state, including her first full marathon and even a few races to the summit of Pikes Peak. To date she has completed countless half marathons, four marathons, two century rides, and a full Ironman triathlon. She is currently training for Ironman Canada 2012.

Today, Julie is certified as a CrossFit Endurance instructor and is also a certified NASM Personal Trainer who resides in Southern California. She is currently training for IM Canada using a primarily CrossFit Endurance method of programming and plans to share her experiences via her blog.