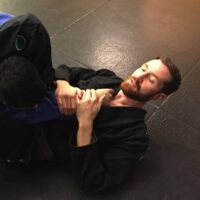 Laurence Griffiths is a Brazilian Jiu Jitsu competitor and heath and fitness coach, operating Effective Health and Fitness. He is currently a brown belt under Cesar Lima (a Roger Gracie black belt). He competes on a regular basis both nationally and internationally, has medaled in several UK tournaments, most recently taking silver at the 2015 IBJJF European Championship. Prior to this, Laurence played Rugby Union for over fifteen years competing for several teams in his home country of Wales and also captaining his university side, as well as playing Rugby League for three years.

Throughout this time, he has developed an absolute passion for strength and conditioning, building knowledge across a broad range of areas, although he now focuses on calisthenics, bodyweight exercise, and kettlebell training. He is currently formalizing his knowledge by studying for the NSCA Certified Strength and Conditioning Specialist qualification.

In addition to the above, Laurence is qualified to MSc level in the field of psychology, so takes a holistic approach towards health and fitness by coaching on the mental as well as the physical sides of performance.