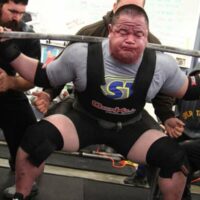 Known to some as "Smelly" because of his brother's documentary, Bigger, Stronger, Faster, Mark Bell is the owner of Super Training Gym in Sacramento, CA. He is a World and American record holding pro-powerlifter. He has squatted 1,025lbs, benched 854lbs, and deadlifted 755lbs. His 2,551lb total is the highest in California history.

At his gym, Mark trains lifters of any age, sex, or experience level. He also runs meets 3-5 times per year in Northern California, as he is the Southern Powerlifting Federation State Chairman. You can see him and his team train on their video channeland in their DVD series.

Mark is the inventor of a product called the Sling Shot, a supportive upper body device that helps improve the bench press and push up. He also owns and operates the nationally distributedPOWER Magazine. In addition, Mark writes for the CrossFit Journal and has started offering Crossfit Powerlifting Certifications on behalf of Louie Simmons of Westside Barbell.