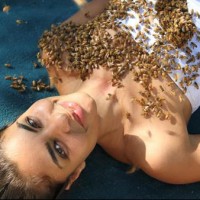 In 2010, Maryam Henein’s fifteen-year career as an investigative journalist, entrepreneur, and producer hit a milestone with the release of her award-winning documentary Vanishing of the Bees, narrated by Ellen Page. It also marked her directorial debut.

Maryam has worked with the BBC, Discovery, Robert Greenwald, and Morgan Spurlock, and in 2006, she hosted a program for TLC about the Ark of the Covenant. Her articles have appeared in several publications including the Los Angeles Times, Maxim, Science & Spirit Magazine, and Penthouse.

Maryam’s immersion in nutrition science and alternative healing started about ten years ago, on the heels of a near-death experience. Shortly thereafter, the bees flew into her life. Today, she is the founder of Honey Colony, a magazine and marketplace geared toward people who are starting on their health journey. This 75-second animation explains the site’s concept.