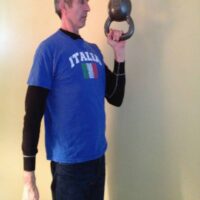 Michael began writing and studying nutrition at or about the age of seven. He wrote and read his first poem to his second grade class and it was not well received. His mother read voraciously about diet and health and spent every afternoon with little Mikey watching the Jack LaLanne show. It stuck.

Michael swam competitively on neighborhood teams, in the AAU as a member of the De Anza swim team and swam and played water polo through high school. He began studying Kajukenbo after graduating from high school and fought in tournaments and gave weapon demos at half way houses and juvenile detention facilities.

He then took a decade off to drown himself in debauchery before beginning to workout again at a small gym in San Francisco called Above Brainwash, a gym in the day and a performance venue at night. That morphed into a love of training and performance. He competed in triathlons for a while, got certified by the American College of Sports Medicine as a Health/Fitness Instructor, joined the NSCA and then moved to Los Angeles where he worked as a spinning instructor and personal trainer, he got a degree in English literature and worked as a part time instructor in a crossfit gym before becoming obsessed with kettlebells, indoor rowing, and getting strong.