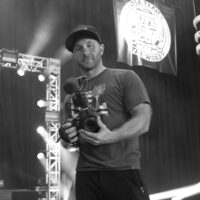 Rain Bennett is a two time Emmy-nominated filmmaker, fitness professional, public speaker, and writer. An athlete his whole life, he began teaching boxing fitness after falling in love with the “sweet science” during a couple of years of amateur competition. He quickly learned that teaching was almost as fulfilling as winning, and nowhere near as dangerous. Boxing led him to calisthenics, or bodyweight exercise, and calisthenics has taken him around the globe.

He directed and produced a feature-length documentary about calisthenics culture in true indie fashion, by traveling the world with only a backpack and a Canon DSLR camera. That film, Raise Up: The World is Our Gym, won “Best of the Fest” at the Hip Hop Film Festival,and received global distribution through Red Bull Media House. Bennett has since been featured in publications like Men’s Health and Sports Business Global for his work in the calisthenics community. When he’s not training clients at Sync Studio (in NYC or NC), he’s hosting a new webseries called The Perfect Workout Show, and currently resides in Chapel Hill, NC.