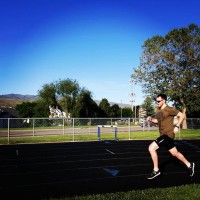 Sam Winston is an athlete, coach, and student of athletic performance. A life-long competitor, Sam became a sprinter for a nationally recognized track and field program in college and was part of a team that won two conference championships and produced a number of competitors at the Olympic trials.

After his time competing, he began coaching and helped guide a number of sprinters to individual golds at the championship level, as well as successful relay teams and top 10 all-time performances by those teams. During his involvement in athletics he has been mentored by a team of former Olympic caliber athletes and coaches. This experience has allowed him to learn from the best in the business how to be an elite athlete and develop elite athletes.

Since then, he has worked internationally with elite running clubs, soccer teams, and has been involved with domestic Special Operations Units and amateur and professional athletes looking to take their game to the next level.

Sam has earned his Master’s Degree in Exercise Science, and has begun to compete as a triathlete at an elite level in pursuit of professional status. He is certified as a Performance Enhancement Specialist and a Level II Speed Specialist, as well as having been part of various projects working with other professionals looking to perfect their craft. Sam lives and breathes his profession and is constantly in search of becoming a better coach and athlete.