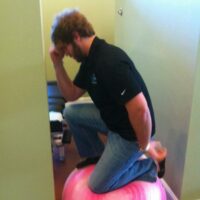 Dr. Tyson Austin grew up in Idabel, Oklahoma where he graduated in 2004. In the fall of 2004, he startedhis undergraduate education at Oklahoma State University in Stillwater, Oklahoma wherehe graduated with his Bachelor of Science degree in Nutritional Sciences in May 2008. A week after graduating from Oklahoma State, he started his pursuit for further education at Parker University where he graduated with his Doctor of Chiropractic degree in April 2011.

Tyson is also an adjunct faculty professor at Northwest Arkansas Community College wherehe teaches anatomy and physiology. In 2013, he participated in taking care of CrossFit athletes at both the North Central Regionals and the CrossFit Games. He currently trains CrossFit himself three to five days per week and is training for a full Ironman in Cozumel later this year.

Tyson’s passion is helping peoplefunction at 100%. He approaches this through chiropractic care, functional medicine, functional movement, specific dietary modifications, andpostural exercises so thathe can helphis patients understand how the body works and how they can keep it working not only properly, but also optimally.