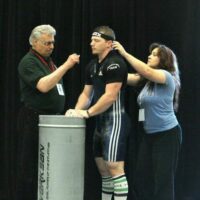 Ursula was an elite athlete who then distinguished herself by becoming the first and only woman to ever attain USA Weightlifting’s highest coaching level, Senior International Coach Level 5. Her athletes have competed at and won national championships at the junior, collegiate, senior, and master levels, as well as Olympic Trials. She has trained and qualified athletes who represented Team USA at the Junior World Championships, University World Championships, Senior World Championships, and Pan Am Games.She has trained and coached athletes to compete at every national championship since 1993. She currently coaches a men’s Olympic weightlifting team, Texas Barbell Club, several women who compete for Coffee’s Gym, and several competitive CrossFitters. She also regularly competition coaches many of USA’s elite athletes as an assistant or in the stead of their own personal coaches.

Ursula earned a Bachelor’s Degree in Exercise and Sports Science, and a Master’s Degree in Political Science both from Texas State University. She started a career as a professor at Austin Community College in kinesiology in 1994, and continues to teach in the government department.

She is and has been a Technical Director on USA Weightlifting’s Board of Directors since 2009. She works as part of the CrossFit Olympic Lifting Certification Staff and instructs the USAW Level 1 Sports Performance courses. She is the owner and operator of WeightliftingWise.com, providing instruction and education to coaches and athletes. She offers her own three-hour introductory Olympic weightlifting courses and wrote the curriculum and instructs The Art of Coaching Weightlifting for aspiring coaches. She is currently awaiting the November opening of her own facility Weightlifting Wise and Texas Barbell Club as part of RedSide CrossFit in Leander, Texas, just North of Austin, Texas.

She has been married to a soccer player since 2005 and they have a nine-year-old son who lifts sometimes and plays soccer a lot.