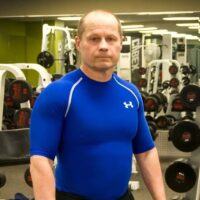 Walter Urban is an American born powerlifter and Guinness World Record holder and challenger living in Canada. He is a member of one of the strongest drug-free powerlifting teams in North America, the Iron Foundation. Aging from nineteen to 53, male and female, they train three to four days a week, two to three hours a day, fifty weeks a year - drug free, and most for over fifteen years.

On September 15, 2011, at the age of 53, Walter set a new Guinness World Record for the most amount of weight squat lifted in one hour live on Live with Regis and Kelly, lifting 127,24 lbs drug free. His effort to break the current world record was to bring attention to the fact adults can continue to remain healthy, and get and be stronger, longer than even before well into and beyond their forties.

Walter holds an MBA from Bowling Green University and a BS in Economics from Albright College. Walter is a license private pilot, licensed skydiver, a former pro ski racer, hang glider pilot, runner, Formula Ford race car driver, and a former member of the 1982 United States Parachute Para-Ski Team. Walter is the President and owner of Urban Dynamics Inc., a consulting company. Walter and his family reside in Guelph, Ontario.