Being involved in two of the most intense workout crowds around – CrossFit and fighting, I often have to remind my patients we workout to keep ourselves fit and healthy. We strengthen our bodies to keep injuries at bay and to feel energized. When it crosses the line into more of a compulsion rather then a healthy activity is when one needs to step back and re-evaluate their training. Sometimes more is not always better.

A new patient visited my office recently with a right knee injury. He had torn his meniscus six months ago and recently reinjured it while he was training for an upcoming MMA fight. Upon our interview, I also found out he was dealing with tight hips and elbows, tense shoulders, neck and a bout of TMJ. His vision had recently diminished. His energy was low, he sweat heavily throughout the night and he was waking up at four in the morning unable to get back to sleep. He had three colds in the past four months and was currently fighting a sore throat and sinus congestion. In the continuous cycle of dropping and re-gaining weight for his competitions, he had lost sight of how much he had been eating, which turned out to be not nearly enough. And as we continued to chat, he also openly admitted it felt like he had lost his fire and drive to fight anymore.

I am a firm believer a life of wellness is achieved through the simpler points – proper food, sleep, mental well-being and exercise. Yes, exercise could almost be considered a cure all. But when are you working out too much? When has it gone too far? At what point are you doing more harm then good?

Exercise can be tricky to gauge how much is too much. I train with CrossFit athletes and fighters who are incredibly conditioned. Often times these athletes will physically appear at the top of their fitness levels but upon a closer look, you’ll find them to be rather run down.

Next time you’re at your gym take a look around at your fellow peers. Are they pale and pasty looking? Do their eyes lack shine and look tired? Is their hair limp and dull? Are they breaking out in blemishes? These can all be telltale signs that one may be over training.

Other ways to gauge if you’re overtraining can be:

In all of these cases, rest helps to regenerate the over-trained athlete. The only problem with this is the average athlete does not like hearing the words, “You need to take a break.” Often they desire a fast recovery so they can get back to training as soon as possible. 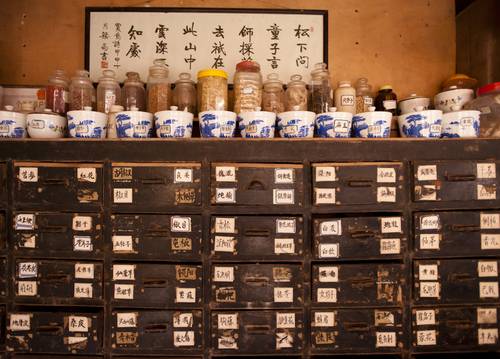 Integrating Traditional Chinese Medicine can be invaluable for an athlete’s recovery time. Acupuncture has been shown in studies to have measurable effects on the flow of blood to certain areas of the body, which in turn can be used to help decrease swelling, spasms and inflammation, control pain, increase range of motion and help promote healing.

Along with contributing to a speedy recovery, the acupuncturist can teach an athlete to anticipate their unique possible weaknesses in order to stave off injury or overtraining – one example being to work with the athlete in figuring out what the best foods are for them to improve performance and recovery.

Within four acupuncture treatments, an herbal formula and some lifestyle recommendations, my fighter patient had significantly recovered. He had reduced his training, was eating much more heartily and sleeping more soundly. His body and knee had both recovered. His fire was back and he was ready to begin training for his next fight. While physical activity is an extremely important component to good health, it is important to remember that in everything, there must be a balance.

At the age of 23, Alyssa had to undergo open heart surgery. This began a long list of happenings that would change her view of Western medicine forever. There were so many events that seemed in opposition to cultivating health and healing. Once she had finally recovered from surgery, Alyssa knew there must be more to medicine. Simple humanity was a huge piece of what was missing in the care she had received.

Soon after surgery, Alyssa realized her life calling as a health practitioner and moved to Los Angeles to enroll in a Masters program of Acupuncture and Chinese Medicine. In 2011 she opened her own acupuncture and wellness practice in Santa Monica. In addition to this, she is a certified CrossFit trainer and co-founder of Sweet Cheeks Headquarters, a successful food blog that focuses on healthy living and Paleo style cooking. Sweet Cheeks is a regular contributor to the CrossFit Journal and a site where you can find a continuous stream of anecdotes and delicious recipes.

Alyssa believes a life of wellness is achieved through the simpler points – proper food, sleep, exercise, and mental well-being. Provided with the right tools the human body has amazing capabilities to heal itself of just about anything. If you love your body, it will absolutely love you back.