Be a Debbie Downer: Using Negatives in the Bench Press

A new study shows eccentric-only training might be the key to hitting your biggest numbers.

There is a love affair with the barbell bench press. The exercise elicits a level of excitement second to none. The “how much can you bench” question has been around for all time, it seems. But unless you’re a powerlifter, why does it matter? Aside from that sport, it’s just another exercise used to get stronger in the muscles it activates. Whatever.

But what if there’s more to bench pressing than the age-old bro science? And what if taking a negative attitude regarding this move is actually the most productive way to go? Let’s take a closer look at some new research on this classic movement.

The Biomechanics of Benching

Eccentric muscle action entails muscle lengthening. In the barbell bench press, this would mean lowering the resistance from complete arm extension and bending the arms as the bar lowers to the chest. Believe it or not, all other factors being equal, the muscles involved in the bench press are stronger in the eccentric phase than when compared to the concentric, or raising, phase. In other words, you can lower “X” amount of resistance better than raising the same amount of resistance.

“The number of repetitions performed with 90% of a 1RM in the eccentric mode was significantly greater when compared to concentric (7.67 versus 4.57 reps).”

The underlying factors of concentric versus eccentric contraction get mechanical. These factors relate to the finer details involving the cross bridging of actin and myosin filaments within the muscle fiber-myofibril-sarcomere complexes. That is beyond the scope of this study and another discussion.

All technical science aside, this study aimed to determine two things:

The subjects used in the study were healthy men of an average age of 24 years. They tested for a 1RM in both the concentric and eccentric phases of the bench press. They also tested for the maximum number of reps they could perform with 60%, 70%, 80%, and 90% of their 1RM. 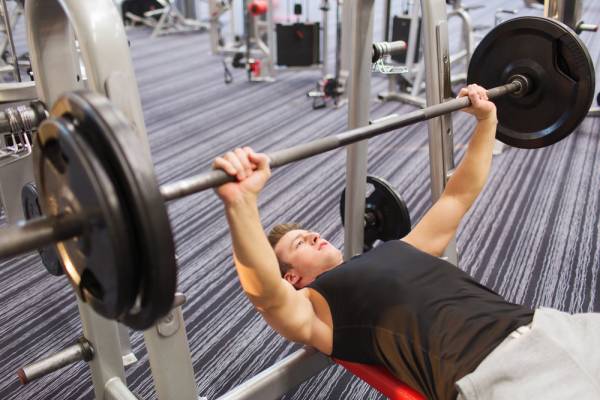 “[A]ll other factors being equal, the muscles involved in the bench press are stronger in the eccentric phase than when compared to the concentric.”

What can be gleaned from this study?

Therefore, if you are into bench pressing, do your regular routine but consider the following: