Befriend Your Body: Say No to Overtraining and Say Thank You to Your Body

I learned the hard way that constantly beating up my body without appreciating what it gave me can only end up in a place of illness and injury. Read how I learned to express gratitude to my body.

“Love thyself as they neighbor.” Frequently, I think we should word the old adage this way instead of the way we normally read it. Most of us tend to be kinder and more forgiving to other people than we are to ourselves. If a colleague misses a deadline at work, we give them perspective. If a friend is feeling bad about him/herself, we remind them of how great they are. But if the tables are turned, we beat ourselves up for missing that same deadline or catastrophize whatever is making us feel bad.

This can enter the realm of the physical too. As athletes, we can enter into antagonistic relationships with our own bodies. Rather than appreciating what they enable us to do, sometimes we beat them up and beat them down, expecting more and more of them while rarely being satisfied or giving them time to rejuvenate.

I can use myself as an example of this. There was a time a few years ago when I was training Brazilian Jiu-Jitsu twice a day and lifting heavy weight three or four times a week on top of that. I was also running on little sleep because I still had to make a living, so I was working when I wasn’t on the mat or under a barbell. Over the course of several months, I developed alopecia, stopped getting my period (sorry if that’s TMI), and had to roll myself out of bed every day, unable to sit up comfortably and having to walk around bent over like a wizened old man until my back and shoulders loosened up.

The scary thing is that I didn’t even notice. Any of it. I just kept insisting that my body continue to perform, not even aware I was falling apart. In fact, I was annoyed my days were not simply brimming with effortless weightlifting PRs and flying everythings. I was frustrated that I felt achy and tired and had to force myself to keep up the pace.

It took my mother asking me why it looked like someone had ripped a hunk out of my scalp for me to register the alopecia. (And I have fellow Breaking Muscle contributor Traver Boehm to thank for his amazing treatment.) Then I vaguely wondered about my period after that; at the time it was great not to have to deal with it, but in retrospect, it was a clear message from my body that something was wrong. And over the course of a year, the back issues eventually developed into sciatica and a piriformis impingement that ultimately took me out of training for the better part of five months – and caused me the most pain I have ever felt. But at the time, I kept pushing, trying to force my body to do more than it was comfortably able, though it was trying to register its distress in multiple ways.

Finally, my body had enough and basically flipped me the bird. It – I – got horribly ill, with pink eye, fever, chills, aches and pains, nausea, dizziness: a concatenation of symptoms that had me begging for the sweet release of death. I was down for the count for a solid week, and I spent the next couple weeks after that relearning to breathe, walk, and not dry heave or ooze fluid out of my alien frog eyes.

Why am I relating this? Here’s why: Because I suspect there are others out there who treat their bodies as the enemy, as something to be flogged into submission, rather than as the very reason they are able to do the things they love to do. And what I learned the hard, feverish way is that there was a better option. One night during that hellish week, I vaguely remember waking up around 4am, drenched in sweat, after a full 24 hours of being unconscious. I went into the bathroom, looked in the mirror, into those crusty, oozy eyes, and apologized to myself, to my body, for what I had done to it. 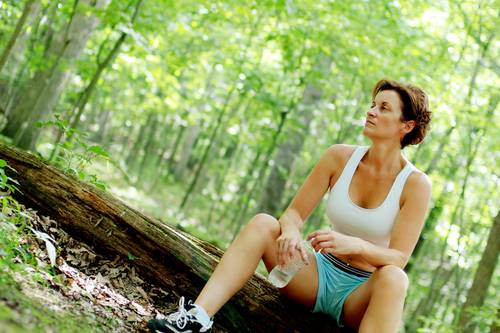 And I swear, after that moment, I started to feel noticeably better, like my body was saying, “FINALLY! Finally you get it, you moron!” I had finally decided to enlist the help of my body to be my partner in crime. And since then, I make a point of thanking my body for what it enables me to do every day. I know it sounds tree-huggy, but it has worked. Arguably, I am a little long in the tooth for this jiu-jitsu crap. I really believe that getting rid of the antagonism I have historically felt toward my body has contributed to the fact I am better shape now than I was 20 years ago and still love to train and pick up the heavy things.

I’m not saying we should baby ourselves. We don’t get better unless we go outside of our comfort zones, and this requires testing our limits, mentally and physically. But what I am saying is we should treat our bodies with respect and gratitude, not with derision and frustration. Whether you are angry because you lost a tournament match, hate yourself because you “feel fat,” or are climbing the walls because you are sidelined by an injury, consider remembering that you and your body are in it together. You might as well be on the same side.

So, the next time you start to beat yourself up or go to the dark place because of a real or imagined fitness shortcoming, try shifting your energy and focusing on how much your body enables you to do. Look yourself in the mirror and say thank you.