It’s often enticing when getting back into regular exercise to try the newest fad in fitness. One of the more popular movements of late is Les Mills Body Pump.

It’s often enticing when getting back into regular exercise to try the newest fad in fitness. One of the more popular movements of late is Les Mills Body Pump. A recent study conducted by researchers at Sao Paolo University in Brazil and published in the Journal of Strength and Conditioning Research tested the actual effectiveness of the BodyPump program on the group most likely to try it, sedentary women.

If you are not familiar with the format, a BodyPump class is 60 minutes in length and involves moderate to high intensity resistance training with a barbell. In a class a participant will execute approximately 800 repetitions of various exercises, but with relatively low weights. The BodyPump website claims an individual can burn 560 to 1,000 calories in each class.

The exercises included in a BodyPump class are

For the study, subjects participated in two BodyPump training sessions per week for a 12 week period. Nineteen untrained, but healthy women were selected. As described in the study, “Subjects reported no or little experience with weight training and no exercise training engagement in the six months preceding the study.”1

Researchers wanted to be able to quantify the neuromuscular, metabolic, and aerobic running fitness effects of BodyPump on the subjects. So, the following measurements were taken at the beginning and end of the study:

During the 12 week training period all subjects took the same BodyPump class taught by the same instructor. The weight initially used was 10% of their 1RM squat weight. This weight was increased by 5% every two weeks. The weights for upper body exercises were adjusted according to the instructor’s discretion. 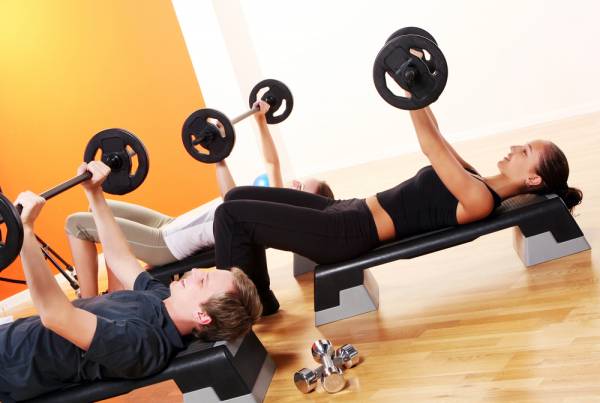 Putting these results together, researchers concluded BodyPump classes were effective at increasing muscular strength and endurance and developing efficiency in movements and muscle activation.

Although subjects did indicate metabolic and cardiovascular improvements, these improvements did not translate to actual aerobic fitness. Exercises involving the lower limbs were most responsible for increases in heart rate and researchers believe a program with more lower body involvement may increase the likelihood of it being beneficial for aerobic running fitness.

What does that all mean? For a deconditioned woman looking to get back into fitness, BodyPump could be a good choice. The program is available worldwide, involves group motivation, and simple exercises. The science shows that while she may want to include some additional aerobic activity, BodyPump will increase a participant’s strength and muscular endurance.