“It seems to have become popular to call someone who repeatedly wins using the same technique, such as an armbar, a ‘one-trick pony.’ That ‘one trick’ has many entries into it. It is not one trick; it is several different tricks.”

The pony being referred to in this quote from Winning on the Ground: Training and Techniques for Judo and MMA Fighters is UFC women’s bantamweight champion Ronda Rousey.

The MMA world got a lot more interesting when Rousey retired from judo after winning her Olympic bronze medal in 2008. Her career progressed quickly from her first amateur fight on August 6, 2010 to becoming the Strikeforce women’s bantamweight champion on March 3, 2012. All of her wins were by sometimes gruesome first round armbars.

How does someone go from amateur to champion of the world in seventeen months? Ronda gives a lot of the credit to her mother, judo world champion AnnMaria De Mars. Ronda said AnnMaria used to wake her up with armbars so she would always be ready.

Early in AnnMaria’s judo career, she severely injured her knee and was no longer able to effectively throw her opponents. Instead of walking away from the sport, she decided that she would win by following her less-than-perfect throws with a killer ground game.

In 1984 she became the first American to win the World Judo Championships. Her co-author, James Pedro Sr. is also an accomplished judo competitor, winning the bronze medal in the Pan-American Championships in Panama.

He went on to become one of the best judo coaches in the world with athletes competing on all of the last five Olympic teams. All of the Olympic Medals brought home to America from 1996 to 2008 were won by athletes under James’s tutelage.

De Mars made a point in her blog to clarify that every word in the book was written by the authors themselves rather than ghost writers.

After seeing her in interviews, it’s obvious that De Mars’s writing style mimics her speaking style. Her voice is plainspoken and I found myself smiling at several points in the book at her zero-bullshit narrative.

I competed in my first Brazilian jiu jitsu tournament after training for four and a half years. Afterwards, I went back to class to figure out what I could improve upon for the next one.

One of my instructors, Renzo Gracie brown belt Jon Gale, explained some of the mistakes I made were in defending very basic beginner moves that I didn’t expect because our teammates don’t use them much. In Winning on the Mat, use of the basics is stressed.

The first chapter offers six secrets to success. Two of these secrets are: avoiding hesitation in the transition between the throw and mat work, and always having a back up plan for failed techniques.

The six secrets aren’t really secrets, though, everyone knows them – they just don’t use them. The authors explain why they are so important and their athletes have the medals to prove it.

The illustrated techniques shown in the book are always given in a series. There are counter techniques, counters to the counter, and counters to that counter. The authors explain, “Every direction that opponent moves, you have another technique waiting. This is the secret to being dangerous on the mat.

There should be no move your opponents can make that will keep him or her safe from you.” It is stressed that to avoid being overwhelmed by the string of techniques, athletes should master each step one at a time, eventually building upon each of them until they are ingrained in the muscle memory. 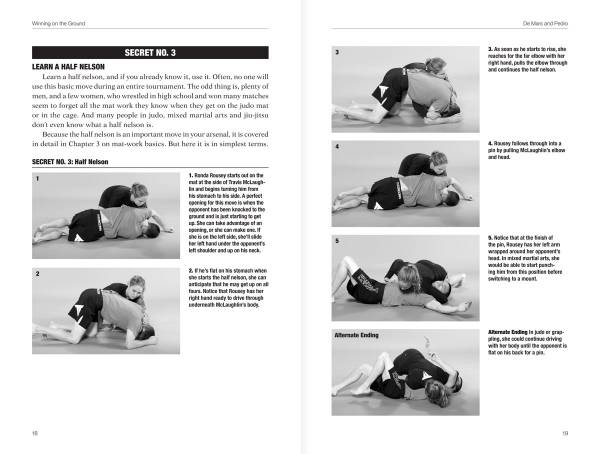 Another emphasized point in Winning on the Mat is drilling perfect technique and Chapters 7 and 8 provide drills for both offense and defense with thorough explanations as to what skills they develop for competition.

There is a quotation from Vince Lombardi in the book that I love: “Practice doesn’t make perfect. Perfect practice makes perfect.” How many times have I drilled techniques in class that were just “good enough” and used the excuse that my partner outweighed me by seventy pounds to explain why it wasn’t working properly?

Or brushed it off saying it didn’t fit into my game? Each technique has its purpose and when you’re spending the time drilling it, it should be done correctly. De Mars stresses that drilling and repetition are the most important parts of training technique.

The book is carefully illustrated in parts to show perfect technique, although it is noted that in other illustrations the technique contains flaws as a result of drill speed and reaction time.

In her Behind the Scenes Winning on the Ground Part 1 blog post, De Mars gave the photographers a lot of credit:

The photographers from Black Belt were amazingly good, as you can see from the book. The flip side is they wanted to do every shot from three different angles (at least!) and both Ronda and Crystal were losing patience. They kept asking me why I didn’t tell the photographers what to do, since it was my book. The answer is that I am mature enough to realize that other professionals know their field better than me so I was not going to argue with them on that score.

The effectiveness of the authors’ advice is proven time and again in these illustrations because the athletes featured are elite level medalists. I liked that they gave other members of the team exposure in the book instead of just using Ronda Rousey.

In addition to the technical training and secrets given throughout the book, the authors share simple game plan strategies that are often overlooked. Small details are given to make seldom used and therefore unexpected techniques work and common mistakes are identified.

Where I am at the beginning of developing a women’s BJJ program at Titans MMA, I found this book to be incredibly useful. I want to teach my students the best possible habits to carry forward throughout their training. The authors provide valuable insight for coaches as well as athletes that are applicable in all sports.

In her blog, De Mars said of writing Winning on the Ground, “I thought I knew a bit about mat-work that might help some people and Jim Pedro, Sr. knows a lot that is worth preserving. It’s selfish to just keep your knowledge to yourself.” I’m so glad they decided to share.