Carbohydrates Affect Cognition After a Workout

In situations where memory may be important to you after exercise, you might want to avoid high-carb drinks.

Cognitive decline resulting from exercise-induced heat stress is a real concern for serious athletes. In a recent Journal of the International Society of Sports Nutrition study, researchers came up with a theory on how to combat this effect. 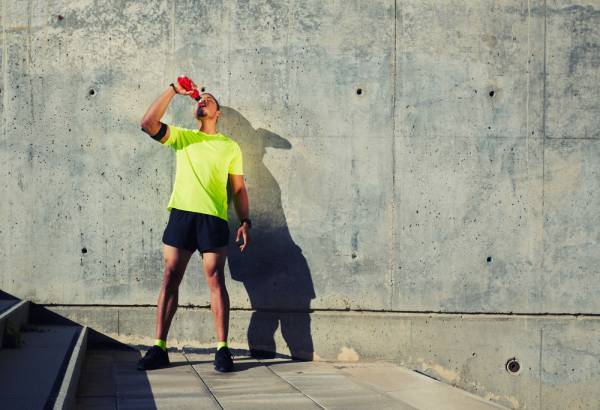 Previous studies have shown reduced cognitive abilities during hyperthermia induced by exercise. Even when participants of prior studies were acclimatized to hot conditions, some mental tasks, like awareness of what’s happening in the periphery, were reduced. The effects don’t just last while you’re hot, either. Effects of heat on mental performance have been demonstrated to persist for hours following hyperthermia.

“During exercise, especially in hot conditions, your ability to maintain your blood glucose levels becomes taxed, and this will theoretically contribute to cognitive decline.”

There are several theories as to why these mental effects occur. One major contributing factor has to do with energy availability, particularly energy in the form of glucose. In order for your nervous system to function optimally, it needs a steady supply of glucose. This is why maintaining healthy blood sugar levels is so important. During exercise, especially in hot conditions, your ability to maintain blood glucose levels becomes taxed, and this will theoretically contribute to cognitive decline.

The researchers hypothesized that consuming a sugar-containing sports drink would reduce the cognitive decline associated with exercise and a hot environment by increasing the available energy for brain function.

Twelve participants performed a cognitive test three times. The first time was to gather preliminary data. The two follow-up tests were performed in a hot room of 30 degrees Celsius (86 degrees Fahrenheit), after a 75-minute run at 70% of VO2 max in the same room.

In one of the exercise trials, participants consumed a sports drink in portions of one milliliter per kilogram of bodyweight. The drink was standardized to 6.8% carbohydrate and was consumed at three times:

For a person weighing 200lb, that’s about three ounces each time, with each drink amounting to about six grams of sugar.

The experiments worked, putting the participants in a substantially hyperthermic state of 39.5 degrees Celsius (103 degrees Fahrenheit). Blood sugar levels in the sports drink group were nearly double that of the placebo group.

As expected, exercising in a hot room had a substantial effect on cognition. For the most part, there was a decline in cognitive ability after exercise in both groups of subjects.

But the carbohydrates did not have the expected effect on memory. Scores on memory tests were significantly reduced post exercise when consuming carbohydrates, but scores actually increased post exercise with the placebo drink. None of the other tests showed any difference, regardless of the sugar content or lack thereof. 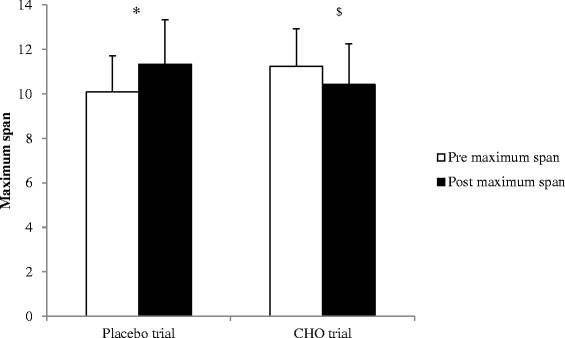 This diagram shows the changes in memorization before and after exercise for placebo and CHO (carbohydrate-electrolyte) solution intake.

Based on these results, it seems memory responds most to what you consume during exercise. In situations where memory may be important to you after exercise, particularly when it’s hot, you should avoid carbohydrates. In fact, the results suggest exercise without carbohydrates may even improve your memory.