I’ve got feet like a Hobbit. Consequently running a marathon never seemed like the thing for me. Then I made two discoveries – Pose method running and Newton shoes. And I ran a whole darn marathon.

I’ve got feet like a hobbit. They’re wide, a little hairy when ungroomed, and my second toe is longer than my big toe. I still have an arch although it’s not as high as it used to be. Oh, and I have bunions. Pretty, right?

I had foot surgery in 2004. It was also the first time a doctor gave me shoe recommendations along with custom-made inserts. He told me to get heavy arch support and sent me to a local running store (Top-to-Top) to have the sales people check my stride and foot strike and fit the right shoe for my Frodo feet. A few months later, my knees started hurting. I blame hip-hop class – but it could have been the shoes or the inserts. I never really got into running because quite frankly, Samwise don’t play that. (I’ll finish up with the LOTR references now.) I never felt good running because either my feet or my knees hurt. I figured running wasn’t for me.

During all my years as a trainer, I’ve had many friends run marathons. They made several requests for me to join them, but I never had any desire and it scared me a little to go through that much pain. And for what? To run 26.2 miles? I didn’t get it. Finally, after being harassed and going through motivational seminar, I decided that I would tackle a feat that I always thought would be impossible for me: a marathon. I would bust-through that self-imposed limitation and teach other “reluctant runners” how to do it, too. Plus my friends had been to some pretty cool places for these marathons: Dublin, Florence, Honolulu. What? I can raise money for charity and get an all expense paid trip to Honolulu if I run this thing? I’m in.

Thanks to AIDS Project Los Angeles and their running coaches, I was introduced to the Pose Method of running. I had always been a heel-striker and even though I never had shin splints, knee and foot pain was always an issue that I thought was due to my body type. After learning the Pose Method in which one strikes the ground with the mid-foot or ball of the foot FIRST and then gently places the heel on the ground, I found that I could actually run several miles without excruciating pain.

Want to change your running technique to eliminate heel strike? A good thing to do is to take off your shoes first. Try running on a treadmill without your shoes on. Your body will naturally avoid a heel strike and you’ll land on the forefoot. Then put your shoes back on and continue to land on the forefoot. Then you can try increasing your speed. Be sure to stretch your calves thoroughly after first trying this new method or they will scream at you the next day.

If you’re running outdoors, you might not want to take off your shoes. In this case, try slowly stepping and lifting your body up through the forefoot, pushing away from the ground and keeping your chest high. Then increase the tempo and concentrate on “falling forward” with your body while pulling the heels up instead of reaching the legs out in front of you when you jog.

Here’s a great YouTube video about the Pose Method if you can understand Australian:

The Pose Method really saved my knees and made it possible for me to cross the finish line at the Honolulu marathon without any knee pain. Second to the Pose Method, I credit my Newton shoes for helping me change my running style. They conditioned me to strike with the front of my foot first because they have this great little rubber ridge or bump on the sole of the shoe so you know if you’re placing your feet correctly when you land. 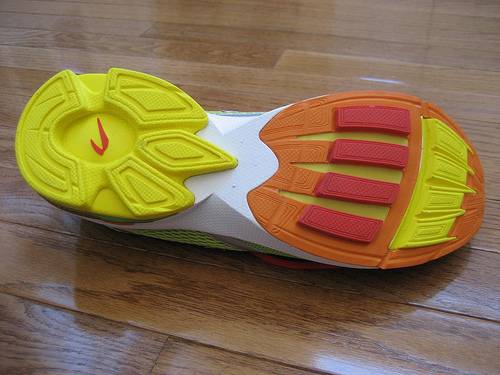 When I first tried them on, I felt like I was wearing clown shoes because they curved up a bit at the toe, but soon they felt normal. The running store guy told me to slowly increase the duration of wearing the Newtons so my calves would get used to the extra stretch – so I switched between Newtons, Saucony, Brooks and Under Armour during my training.

My Newtons served me loyally throughout the six months of training and as I slowly worked into wearing them more and more, I also changed my stride in “normal” running shoes as well. I ended up wearing Under Armour shoes during the actual marathon but without those Newtons, I know I never would have re-learned a running stride that eliminated my knee and foot pain.