Multi-taskers and equivocators rejoice! Have you ever wanted to punch someone but also challenge him or her to a game of strategy? Have you ever had difficulty deciding whether to take care of business with your brawn or your brain? If so, chess boxing may be for you.

Yes, chess boxing. In this sport participants start a bout with a 4-minute round of chess, which is followed by a 3-minute round of boxing for a total of 11 alternating rounds. That is, unless the contest is decided earlier via knockout or checkmate, either of which ends the action. The World Chess Boxing Organisation notes that participants should be in good physical condition and that they are required to have an Elo rating of 1800. (An Elo rating is a measure of the relative skill level of a chess player or the like.)

Chess boxing was first brought to life in 2003 by Dutch performance artist Iepe Rubingh, himself inspired by a graphic novel called Froid Equateur. This novel is part of the Nikopol trilogy created by Yugoslav artist Enki Bilal, and the then-fictitious sport features prominently in it. The WCBO, located in Berlin, describes the sport as “the ultimate challenge for both the body and the mind,” with one of the main hurdles for competitors involving the need to rev up for boxing, then shortly thereafter calm down and focus for chess, and repeat this multiple times. 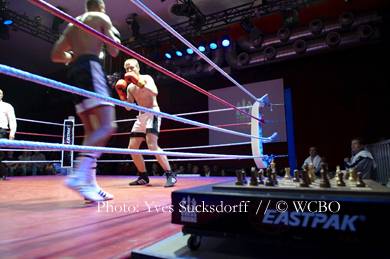 The sport’s eclectic nature is reflected in the LA Chessboxing Club’s rules that “chessboxing should happen in unusual places” and “in front of friends,” and it counts among its fans the likes of Lennox Lewis. Further, the Hip Hop Chess Federation is a separate but similar effort designed to combine chess with martial arts activities for kids. Slogans like “Take the king, or win in the ring” and “Fighting is done in the ring, and wars are waged on the board,” as well as the graphic on the WCBO’s main web page featuring a man wearing boxing gloves adorned with sulci and gyri such as you would find on a human brain drive home the point. And ladies, lest you think chess boxing is for boys only, the WCBO is actively supportive of female chess boxers, and also claims “women think chess boxing is sexy.”

So while you are engaging in your chosen athletic endeavor, keep an ear to the ground – and your mouth guard close. The WCBO’s goal is no less than promoting chess boxing to the status of “supreme discipline of the Olympic games.”

What do you think about chess boxing? Logical combination or outrageous mash-up? Post your observations to comments. What two sports or games would YOU combine?