It seems impossible that The City of Angels, where we act like cars are the angels, would ever allow ten miles of streets to be completely free of cars for five hours on a Sunday afternoon. This seems especially impossible if the streets were cleared for no other reason than for people to get outside and enjoy cycling, walking, skating, running, and skateboarding. But that’s what happened this past Sunday. April 15th was the fourth CicLAvia event in Los Angeles, and each event grows in numbers, support, and miles.

Ciclovías started in Bogotá, Colombia over thirty-five years ago in response to the congestion and pollution of city streets. In Bogotá every Sunday and on holidays over seventy miles of roads are closed to traffic. Two million residents are reported to participate regularly every week. Gil Peñalosa, from Bogotá and Executive Director of 8-80 Cities, said, “How else can you get this many people out to exercise? How else can you battle obesity? We have the infrastructure. We have the streets. All we have to do is close them for people to enjoy.”

After a couple of young bike activists from Los Angeles saw a short film in 2007 about Ciclovía, they thought, “If Bogota, a tough city with traffic that rivals Los Angeles, could institutionalize seven hours of car-free streets every single Sunday, then why couldn’t we?” With the support of super cycle advocates, the Los Angeles County Bicycle Coalition, and a bike-friendly mayor in Antonio Villaraigosa, the impossible happened.

On 10/10/10 the first CicLAvia in Los Angeles debuted with seven miles of car-free streets running from Boyle Heights to East Hollywood. The organizers feared no one would show up for that first event, but Los Angeles showed up in droves, excited to explore the city as they’d never seen it. I was there that first CicLAvia, giddy like everyone else to ride in the middle of the street without competing for space with two-ton vehicles that always seem agitated to share the road. It was like we cyclists were allowed to roam a toy shop at night. 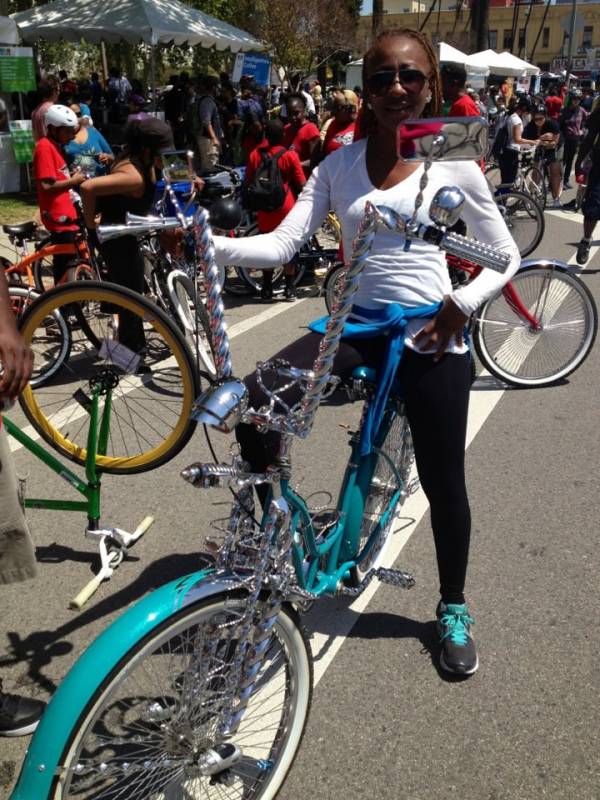 I’ve been to three of the four CicLAvia events. I thought I would feel differently after each, as I got used to the idea, but I always feel freshly thrilled. And I’m not the only one. Nearly every rider I saw seemed to feel the same. We ride and smile and we wave and talk. Everyone is patient at lights and for as many people that are out, I’ve never seen a dispute. Old, young, entire families of every culture and race from every nook of LA are out riding whether they’re on a sleek, minimalist fixie of the younger set or a strange, tall bike of the quirky set, a hand-me-down like a lot of us or a supped-up chrome beast that some of the older clubs like to ride; it is all rightfully represented at CicLAvia.

After the initial thrill passes, the magnitude of the event sinks in. As riders and pedestrians, we begin to connect to a city that is notoriously disconnected. We take away the vacuumed solitude of our steel-can vehicles and something about the fresh air and exercise and lack of traffic noise brings levity. We are not just connecting through a love of bikes and the idea of getting out, we are familiarizing ourselves with the fact that we are wandering around with our neighbors. Somehow extracting the cars teaches us how to be a better citizen of a vast and diverse community. Moving in open space brings a harmony that cannot be explained, only experienced, and Los Angeles is better for it.

Being out of the car, we also realize how interesting LA is, and CicLAvia picked an ideal route to highlight this. The route rolls past many architectural landmarks such as the Disney Concert Hall, the Sixth Street Bridge, and the Times Building. It goes through Little Tokyo, Chinatown, skims Olvera Street, the Art District, past the iconic MacArthur Park up to Melrose, to the unofficial Bicycle District on Heliotrope. Last fall, they added a southern route that ends at the African American Firefighter Museum, the only one of its kind in the country. It’s an original, restored firehouse built in 1897 where the first black firefighters of the city served. 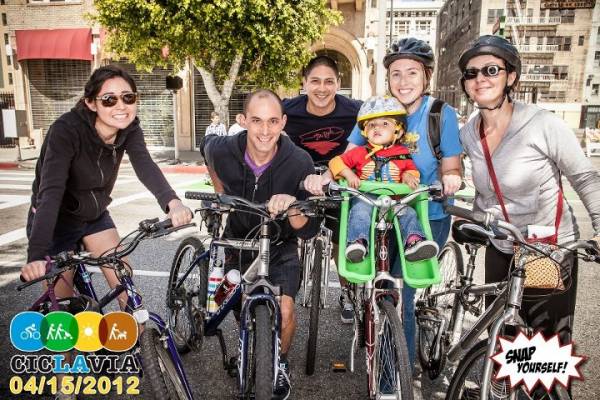 CicLAvia also organizes many events along the route from live music and solar-powered DJs to interactive games like dodge ball, life-size chess, bike polo, and middle-of-the-street double-Dutch. Anyone can jump in and play. There are political protests, though they are much more subtle and calm at CicLAvia. There is also Snap Yourself! – a traveling photo booth that rolls around and will take anyone’s photo for free.

Los Angeles isn’t as big as it seems. It’s only fifteen miles from the beach to downtown. But when we spend the majority of time in cars the city feels compartmentalized, creating an illusion of impenetrable space. Experiencing it in the open air is intimate and bonding. It ignites a pride for a fascinating city that is easy to criticize. CicLAvia breaks down the myth that one can’t get around LA without a car, and from what I saw all day on Sunday, we got around just fine. With a little bit of effort and openness, the impossible can and did happen.