CrossFit and Community: An Interview With Dr. Allison Belger

As a psychologist, a CrossFit affiliate owner, and mother, Allison Belger felt she had a unique perspective on the power of community. Writing a book about it was something she quite simply had to do.

As a licensed psychologist, Dr. Allison Belger has a scientific perspective on the human need for community. As a CrossFit coach and a mother, she has a perspective on community and how it affects the individual. For Allison writing a book about community was not a stretch. It was, in fact, something she quite simply had to do.

Allison’s book, The Power of Community: CrossFit and the Force of Human Connection, was released in March. In it she shares her journey as an athlete, from globetrotting hiker to co-owner of four CrossFit gyms, and the communities she encountered and learned about along the way.

While the task of writing a book might be daunting for some, Allison found inspiration in what she saw occurring every day the gym she and her husband operate, TJ’s Gym. She explained:

As our gym started becoming successful in terms of the fitness program, actually about a year into it, it became clear that there was this whole aspect of other things going on, and that was the psychological, emotional piece. Individual clients who were making changes in their lives because of the fitness program and the support they were getting, and then there was kind of this whole new group phenomenon emerging so clearly in front of our eyes.

So as a psychologist, and as someone who was ready to make use of my psychology training in a new way, it was kind of like it all exploded at once. I thought, ‘Wow, it really is all here right in front of me!”

There were so many people’s stories. I would talk to people at the gym and try to get more in depth with people about what was going on with them, and it became very clear to me that there were some amazing stories, just within our little TJ’s Gym world.

And so as I thought about it and actually met up with other CrossFit people, I knew that this was not unique to us for sure. There are a lot of communities in CrossFit where this is going on, probably more often than not. And so, like I said, I started to just feel compelled to get these stories down on paper.

If you have ever belonged to a gym or a dojo, a church or a charity organization, a tight-knit business or a club, then you have felt the allure and power of community, and experienced the stories that accompany it.

When it came to the power of community in regards to CrossFit, Allison felt her personal approach to sharing these stories would be different because of her psychology background.

I think what makes my book a little bit different, and what makes me uniquely qualified, is that I am a psychologist and I have years of education and training, working with people, talking about their lives and difficulties, and making changes, and figuring out how to help them make changes.

So I have that experiential and educational context, as well as the ability to do good research on a topic related to psychology. So that part of me, my “psychologist hat,” played a huge part in writing the book.

As the stories gathered, inspiration struck, and it came time to write, one of the bigger challenges for Allison was finding the space in her schedule.

She committed to reserving a time slot when her daughters were at school. She sat down to generate as much as she could during that two-hour period every day. 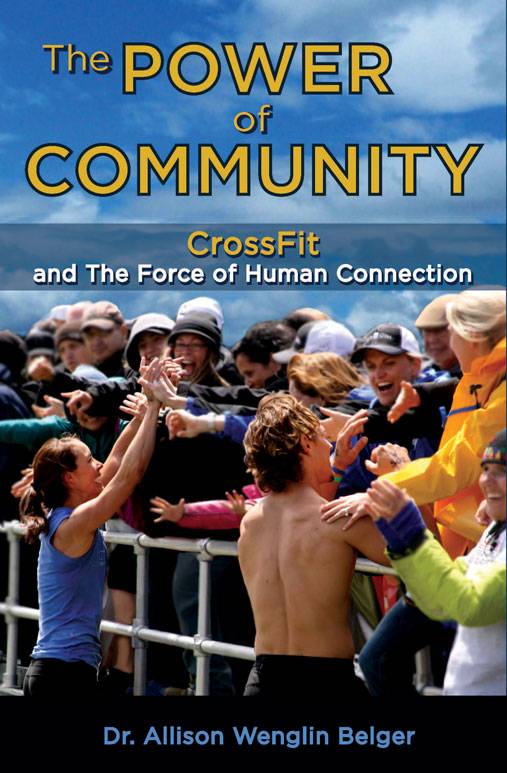 The work it took to create the book is much like the content itself, a combination of science, dedication, hard work, and passion, all with the intent of inspiring and lifting up others. For Allison, she felt her book would be a success if just one person were inspired by it.

Honestly my hope is that people reading this book will feel in some new way that power of what people can do if they’re open to the possibility of coming together and something together.

I’m not necessarily a group person by nature or someone who gravitates toward a group experience, but I think as long as we are open to, like I said, open to the possibility, we can break down preconceived notions about people and understand that we all have come common ground if we want to, and that we can help change lives for the better.

From CrossFit gyms, to the military, to unique projects like First Descents or The Disposable Heroes Project, Allison’s book presents a collection of stories that showcase the power of community, from her own unique perspective.

You can learn more about Dr. Allison Belger on her website at www.allisonbelger.com.