Over the past ten years or so, fitness regimens in the military have seen as much of a transition as everything else in the government. As history has taught us, everything evolves, for better or for worse, as has the modern day soldier and the requirements needed to go into combat. I know this first hand, being nine years into my service in the Canadian Forces and having discovered CrossFit. My intent with this article isn’t to convince you that CrossFit has replaced all that pertains to fitness and its standards related to military training. Rather, this article highlights the benefits of CrossFit for the modern soldier and how it can prepare him or her for combat readiness.

In 2004, a young soldier formed up in ranks, wearing a plain grey t-shirt and regimental shorts to match his comrades, prepared for yet another 10 km run. This was likely followed with an unnecessary amount of pushups and pullups. This fitness standard would continue for nearly two more years of this soldier’s indoctrination to the military. As most of us were already in good shape, how would we really know if we were being challenged, as the fitness standard rarely changed? Our fitness was more habitual then it was a challenge, having rarely been tested in any other form of strength or fitness related activities. We could only assume that we were ready for the trials and physical tribulations ahead of us.

Jump ahead a few years and you see an aggressive and much needed transition into what some would call “Hells Circuit.” We would spend about twenty to thirty minutes with our sergeant sprinting, doing burpees, deadlifting, and maybe some more sprinting. The next day would consist of something completely different, similar to how CrossFit focuses on variety. We were achieving great results in just a few short months, therefore, changing our outlook on fitness in our unit. Other units within our battalion started to follow suit with this concept of training. Months went by and we were advised that we were deploying to Afghanistan. As our battle preparation and fitness standard increased due to the demands of deployment, we were already ahead of the game because of this new style of training. To be honest, I had bounced between this new style of circuit training and weightlifting on my own, prior to my deployment. Although I had noticed great achievements from these new workouts, I still believed that doing an hour or two of bench press and bicep curls would be just as beneficial.

While overseas, I was injured and nearly unable to workout, let alone be a “fit for combat” soldier anymore. Upon return, I had struggles with what to do in terms of rehabilitation, depression, and lack of drive. I did not want to be one of those guys who was happy being unhealthy and lazy. It was at this point that a very good friend of mine told me I had two choices: get healthy, stronger, and faster than I had ever been or keep struggling, lose the battle, and get kicked out of the military for being unfit. Truth be told, the military was all I really ever had, and I knew if I let that slip away from me I would have nothing left. 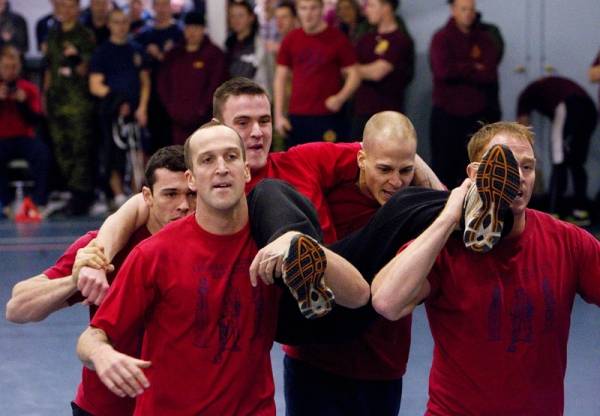 Over time, my motivation changed. I began on my own time to rehabilitate using CrossFit as my form of physical therapy. As I progressed and got stronger and healthier, I realized how much CrossFit meant to me as a soldier and how it would change my outlook on fitness in the military. I also realized I had been looking at my level of fitness and readiness for combat all wrong. It has been six years now since I started CrossFit, and I’m still active within the military. I’m also a CrossFit coach, athlete, and co-owner of a gym. Since that very first CrossFit workout that I thought would kill me, I have vowed to ensure every soldier or trainee I work with realizes the benefits. The varied training of CrossFit not only physically prepares him or her for combat in its physical nature, but its mental nature as well.

CrossFit pushes us physically and mentally beyond measure, as does the nature of a military exercise, operation, or everyday life. As the CrossFit guideline states, “routine is the enemy.” It develops complacency and makes us lower our guard. We need to be prepared, driven, and ready to push ourselves as soldiers and athletes. There are a number of reasons why CrossFit relates to the cohesion of military standards. We seek assistance and push each other, as do the workouts prescribed by some CrossFit gyms. We have that “no quit” attitude. CrossFit teaches us to strive to be better today than what we were yesterday.

Now let’s look at how we have accepted CrossFit into the realm of the military. Many members of the Forces have not only adopted CrossFit into their regular fitness programs or morning P.T., but it has made its way into many units and branches of the military as an acceptable replacement for the old school concept of run, run, run and do some pushups. The Canadian military has an outline of physical training known as the Combat Fitness Model. It is very similar to the concepts of CrossFit, but, it adheres to military policy. Many military members recognize that CrossFit and its special blend of varied exercises and movements allows the soldier to be challenged, pushed, and humbled. This makes a soldier well rounded, prepared and ready to go, anytime, anywhere. Many bases Canada-wide now have small areas designated in their gyms for this specific type of training. Certain units in the Canadian military suggest following such training to ensure soldiers are ready for the testing and demands of some of the more specialized units. 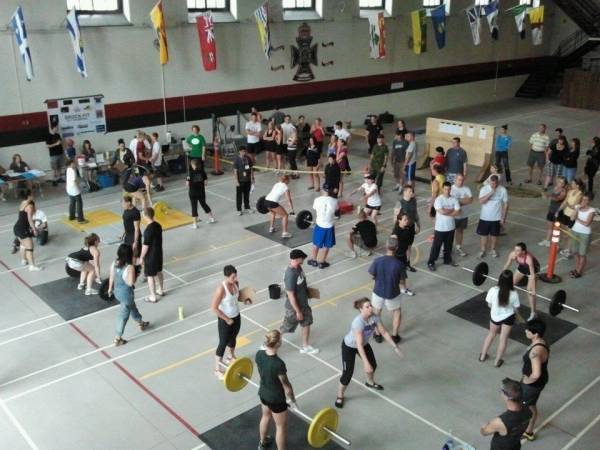 The cohesion and camaraderie of such units in the military resonate within the CrossFit community, too. “Those who train together play together” type of logic is adopted in both worlds. Some units across the country now have CrossFit teams that compete in various events. I personally run an event every summer in my hometown called “Brock-Fit.” It is a charity event, raising awareness to various military causes. It draws our brothers and sisters in arms together, and demonstrates to the community that anyone can participate in this type of fitness regime and get fit.

Who will be the next troop to discover CrossFit and realize its health benefits and draw from its community? Who will be the next young sergeant who will mix up the morning P.T. to help a group of young soldiers discover they have the potential to be the next “fittest man/woman on earth?” I do know and can say with confidence that history will dictate how we prepare for combat and battle. It will mold us into a fitness regime suitable to carry us through that combat and battle. Time will tell, but until then – 3, 2, 1, go!

A member of the Canadian Forces for nine years, Shawn was born and raised in a small town in Ontario called Brockville. He left for the Forces in 2003 and was stationed in Alberta, Canada. From there he was posted to a number of places throughout Canada, as well as being deployed to Afghanistan.

Shawn started fitness training at a young age. At the age of he began martial arts, and his passion for martial arts made him thirsty to learn more and achieve greater feats. By the time he was 25, Shawn achieved two black belts from two various styles of martial arts, studied muay Thai and jiu jitsu, and competed in a number of kick boxing and full contact competitions. From there he never let his drive for health and fitness decline. Shawn was running clubs, coaching fighters and other athletes.

After originally wanting to be a police officer, Shawn decided to join the Canadian Forces. It was also at this point in his life when he changed his outlook on how he trained. He focused on a path that would develop him as an athlete and a soldier. CrossFit was that path.

Now, Shawn is not only a member of the Canadian Forces, but also co-owner of a CrossFit gym in his hometown, as well as an athlete involved in various CrossFit competitions. He enjoys the pleasure and feedback from the programming, the camaraderie of the gym members, and the community he has helped build.