Maybe you’re a powerlifter and you’re used to hanging chains off your barbell or maybe you’re new to strength training and you’re a little scared of powerlifters and all their toys and contraptions. Either way, you could probably benefit from some science behind the use of chains.

A recent study published in the Journal of Strength and Conditioning examined deadlifting and the use of chains. First, researchers wanted to determine whether the deadlift was appropriate to include in explosive resistance training (ERT) protocols, as opposed to more typical exercises used like the jump squat and clean. Meaning, should the deadlift be done with speed?

While the standard lifts of the squat, deadlift, and bench press have commonly been referred to as the “slow lifts” and regarded as pure strength movements, a professional powerlifter will tell you they are anything but slow in practice and can be used to develop muscular power. (An important side note: what’s the difference between strength and power? Power = strength + speed. In other words, it turns out the slow lifts don’t have to be so slow after all.)

And what do chains have to do with it? Chains are a low-tech way of constructing a variable resistance machine. In a deadlift, as you lift the barbell off the ground, the weight of the chains is released from the floor and increases your load. The load will be heaviest at the top of the lift. According to those programming for ERT, chains cause the athlete to maintain the force produced during the lift to counteract the increasing weight.

In this newest study, 23 experienced athletes, most of whom were powerlifters, were tested in two separate sessions. All athletes involved had at least one year of experience resistance training with chains. Athletes performed lifts on force platforms and were also recorded by a seven-camera motion capture system. 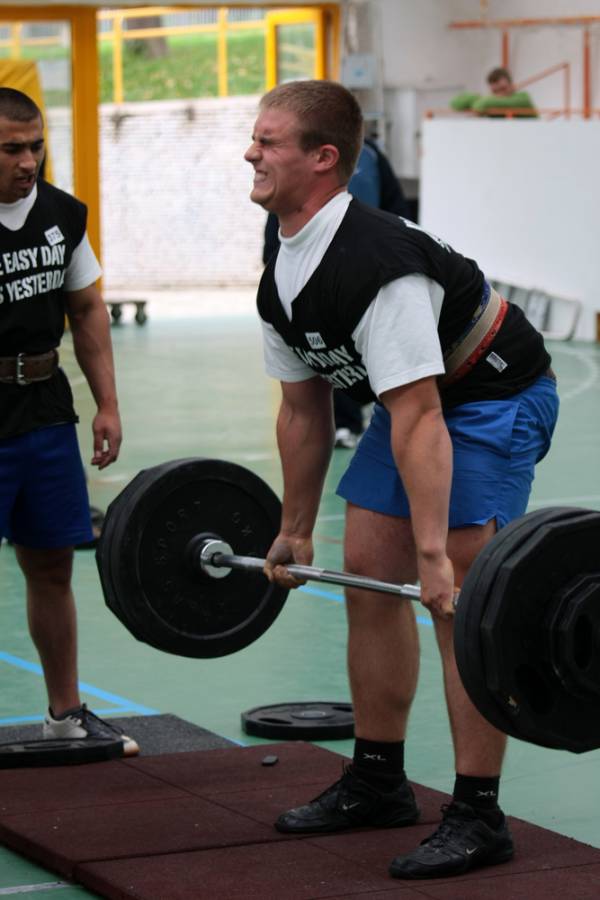 In the first session, athletes established their one-rep max (1RM) for the deadlift. One week later they came back and performed deadlifts at 30%, 50%, and 70% of their 1RM at submaximal velocity. Then came the ERT or maximal velocity lifts. Athletes did their deadlifts again at 30%, 50%, and 70% of their 1RM, but this time they were instructed to lift as quickly as possible and lifted each weight three different ways:

1. “The results of the study demonstrate that the deadlift can be used to maintain positive acceleration for most of the upward lifting phase.”1 By measuring force output across the spectrum of the lift, researchers came to the conclusion the deadlift can be used as a power movement and can be beneficially used in a program intending to develop athletic muscular power.

2. “This study was the first to test the theory that the inclusion of chains with a traditional resistance exercise enables greater force production to be maintained during the latter stages of the concentric action. The results confirmed the theory and illustrated that larger relative forces were maintained when heavier chains were included.”2 So, in other words, yes, chains work.

Coaches and athletes using chains should be aware, however, that while relative force production is increased through this method, there were relative decreases in velocity, power, and rate of force development during the lift. Meaning that while an athlete was forced to push harder through the finish of the lift, the increase in variable resistance from the chains resulted in a slower overall speed and slower increase in the rate of force applied. These changes in the lift also result in different biomechanical stimuli on the athlete.

That’s a lot of information for something most powerlifters trust from experience to work. But, for those of us heading to the gym just trying to get strong, here’s what we can feel confident about the researchers proving: