Hear from one of the originals what it was like to train CrossFit in the early days, what the evolution has been like, and where she is headed next.

When Eva Twardokens discovered CrossFit it wasn’t like it is today. There weren’t affiliates in just about every town and multiple locations in big cities. Nobody knew the word CrossFit and the CrossFit Games had not even been dreamt up yet.

When Eva Twardokens discovered CrossFit it wasn’t like it is today. There weren’t affiliates in just about every town and multiple locations in big cities. Nobody knew the word CrossFit and the CrossFit Games had not even been dreamt up yet.

Eva first encountered the concepts of CrossFit when she met the co-founders Greg and Lauren Glassman at a local spin class. They were the instructors, Eva was a regular student, and Greg convinced her to start private training with him.

Eva, a newly retired two-time Olympian and twelve-year veteran of the U.S. Ski Team, was looking for some stimulating training to keep her busy and in shape. Greg offered to train her for free and after one training session, Eva was hooked.

[Greg] just continued to train me for free and I continued to see him. I remember there was a point where we were doing clean and jerks at this gym; it was called Spa Fitness, so you can imagine they weren’t really into Olympic lifting. I was clean and jerking like 115 pounds, it wasn’t a big deal, but at the time I was learning it, it was much heavier than any other woman was doing.

I remember I lost a jerk and we had metal plates on the bar and it came crashing down. Greg and I called it the “Big Bang Theory” – a couple days later we went to breakfast and he said, “Eva, I don’t know what I’m going to do, I just got let go from Spa Fitness. I can’t train there anymore. I don’t even know how to tell Lauren.”

And that’s when he started his own little place in a jiu-jitsu gym and we were working out on matting and we had a couple pieces of equipment, but we were doing CrossFit. We were doing the very beginnings of CrossFit. And of course it grew. He eventually went to a little bit bigger jiu-jitsu place.

And eventually the very first CrossFit gym would be opened in Santa Cruz. Eva herself years later would operate a CrossFit affiliate in the same town – CrossFit Santa Cruz Central. Her journey from athlete, to private client, to trainer was also influenced by Greg Glassman:

He was like, “Eva, you need to start training people.” So I started doing this class at the jiu-jitsu studio, like once or twice a week, in the evening. I charged people five dollars if they could afford it, if not they could just come in. I taught the class and I was in dental hygiene school at this time, so it was kind of nice for me to teach the class because I took the class as well. I made up the workout and then we all worked out.

I personally remember very clearly the first time Eva T. coached me. Perhaps it was the twentieth time she yelled, “No rep” in my face that made it stick. For many their first impression of Eva is the now infamous “Nasty Girls” video.

And while the women in the video may have seemed like superhuman superstars, the reality of making those old school videos was not too glamorous.

I still remember the day we did Nasty Girls and the moment we were done I got in my car. I had to drive to San Francisco to fly to New York. I took a red-eye and first thing in the morning I was on the set to call some ski races.

That’s what my CrossFitting was like and how all those videos were – I’d get done with my day of dental hygiene and go down to the gym and they’d have something cooked up and we would do it.

These days a lot more people have heard of CrossFit and Eva has been more of an observer to the spectacle the last few years, rather than at the forefront.

It’s interesting, I mean right now I kind of feel like I’m in the bleachers watching the car race. You know, I just feel a little bit on the sidelines, although training isn’t my life and training other people is my life, watching the evolution of CrossFit, it’s going so fast that I really feel like I’m spectating.

I feel like it’s changed a lot from the beginning and, you know, I’ve been doing it since 1998 so when people come up to me and they go, “You ever heard of CrossFit?” I’m kind of like, “Uh, the only reason I wouldn’t have heard about CrossFit is because I’m senile and I can’t remember ten years ago when I started.”

Regardless of how CrossFit, the CrossFit Games, and Eva T. herself have all evolved, she still regards it as a good place for her to have started and as a gift that Greg Glassman gave her:

I think CrossFit has been a really good base for me. It’s been a great tool to be exposed to a lot of different types of movement, because it is so diverse, but it also has helped me really trim the fat and decide what the best way to do CrossFit is and what the best movements are.

There are some movements I’ve scrapped that I don’t use anymore, and it’s helped me branch out into different parts of the industry. I have to thank CrossFit and Greg Glassman for that. 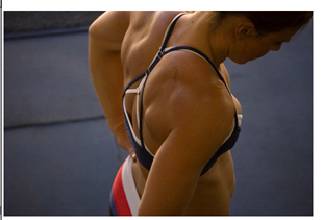 And what comes next? What is the next evolution of Eva T.?

I have in the works now a consulting site that should be up in mid-March [evatstrengthandconditioning.com]. I know I’ll be offering programming for people. My hope is to be able to do distance training with people, give them a little bit of guidance on nutrition and keep an eye on them – specifically ski racers who haven’t made the U.S. Ski Team yet, who don’t know what to do to get prepared for the season.

I can help folks like that. I train all types of people from elderly to kids. It would be for anyone that’s interested in getting a program from me, from what I’ve learned in the industry, streamlining things to the most effective things you can do.

If you’re just trying to be healthy I really think the minimum effective dose is what’s going to be right and that’s to maintain body composition and a level of healthy fitness. I’m still toying with what that is, but it’s something like sprinting, lifting, skill work, and play.

Come back next week to learn more about Eva’s approach to coaching clients, her suggestions for new coaches, and how she rid her Olympic demons through weightlifting.

To learn more about Eva read our feature interview: